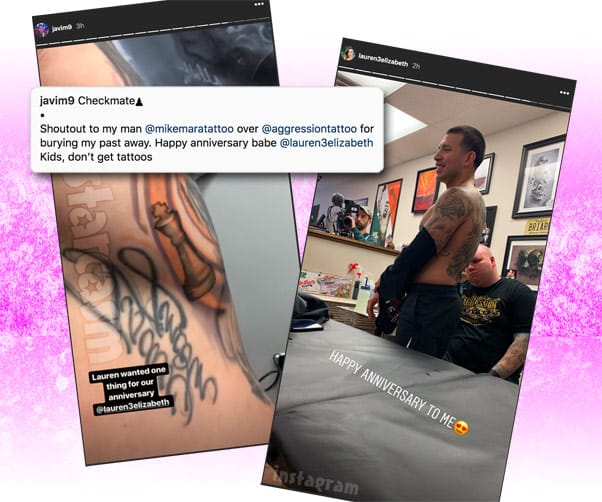 Teen Mom 2 dad Javi Marroquin has a message for all you youngsters out there: “Kids, don’t get tattoos.” That’s the conclusion of Javi’s Instagram caption for a photo of himself at a tattoo studio getting his Briana DeJesus matching chess piece covered up as a anniversary present to his girlfriend Lauren Comeau.

Show fans will remember the scene in which Javi and Briana drove to a tattoo shop to get matching king and queen chess piece tattoos. Once they were done, Javi proudly boasted to Briana: “Sorry, we can’t break up. You’re stuck with me forever, in some way.” Briana famously just rolled her eyes. (Video included below)

The tattoo session took place a little over a year ago, just before the couple famously broke up. Javi and Lauren began dating shortly thereafter — apparently in March, as evidenced by their anniversary. “Celebrating one year with this fine ass man,” Lauren commented on a photo of Javi posted to her Instagram story earlier today. That was followed by a picture of Javi (and an MTV camera crew) at Aggression Tattoo in Whitehall, Pennsylvania. “Happy anniversary to me,” Lauren wrote, along with a heart-eyed emoji.

Javi posted a photo of the finished cover-up and captioned it with his cautionary message to the young folks wanting to get inked up:

Checkmate♟
•
Shoutout to my man @mikemaratattoo over @aggressiontattoo for burying my past away. Happy anniversary babe @lauren3elizabeth
Kids, don’t get tattoos

Here are before-and-after photos of the cover-up: 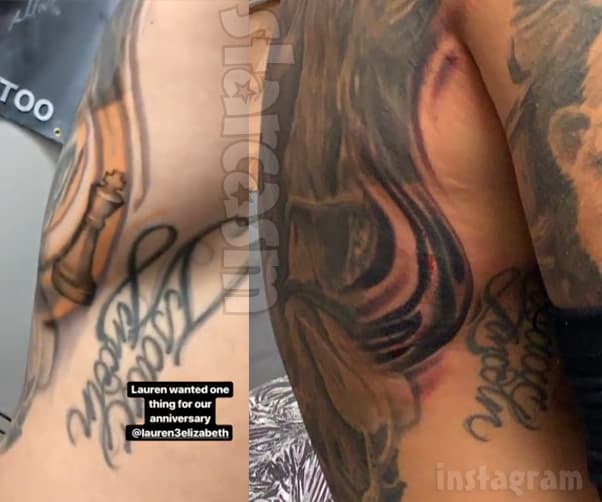 It should be noted that the “before photo (left) includes the artist’s mockup of the cover-up. I believe the chess piece was previously all on its own.

Strangely, the cover-up was right next to Javi’s “Isaac” and “Lincoln” tattoos, but he didn’t get “Eli” added. That would seem like a fairly simple thing to take care of while he was already under the needle.

UPDATE – Javi responded to our tweet about this post and revealed that he did apparently get an Eli tattoo! We’re still waiting on details…

Lauren confirmed the Eli tattoo in the comments of Javi’s post. Someone wrote that they didn’t understand why Javi didn’t get a tattoo for their son, and Lauren responded by revealing: “He is, he’s getting that right now.” Lauren also confirmed that the cover-up was what she wanted for her anniversary, but added that it wasn’t her only gift. “Yup, that’s what I asked for 😊 plus he got me some really nice No Bull sneakers. Officially clean of all connections and ties, a completely clean slate to start our next chapter. 😊”

So far, Briana has yet to react on social media to Javi “burying his past away.” She has previously stated that she is quite fond of her queen chess piece ink, and she has no intention of covering it up or having it removed. “I love my tattoo,” Briana responded to a question about the queen tat back in July. “I won’t cover it up, but I will add more to it,” she said.

Here’s a picture of Briana’s tattoo followed by a video of the scene: 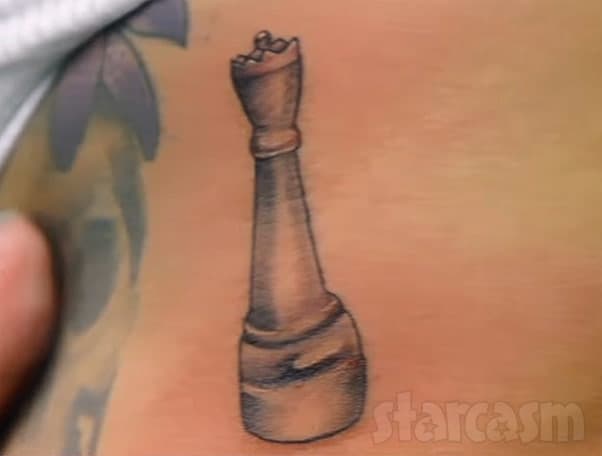 ♔ + ♕ Javi and Briana are leaving their mark on each other in this sneak peek from tomorrow night’s #TeenMom2. Don’t miss a new episode at 8/7c before the #MTVAwards! pic.twitter.com/NsYevW01t2

*If you’re having issues with the video not playing, just tap the play button twice quickly — that seems to activate it. We are currently trying to resolve this issue!

It’s also unclear if Lauren is wanting Javi to cover up his infinity symbol, which is a matching tattoo he got with his ex-wife Kailyn Lowry back in 2012. “We always say I love you to infinity and beyond,” Javi explained at the time. “So the infinity symbol is perfect!”

Javi also shared a throwback photo on Instagram a year later with more reflections on the permanence of tattoos:

Matching tatts, this Ink don't come off Even if rings come off. #throwbackthursday #magnacarta

Well, congratulations to Lauren on getting the one thing she asked for for her one-year anniversary! Perhaps next year she will ask for an engagement ring? 😉

Jenelle Eason attacks Jeremy Calvert, he blasts back by filling his tweets with uppercut ??