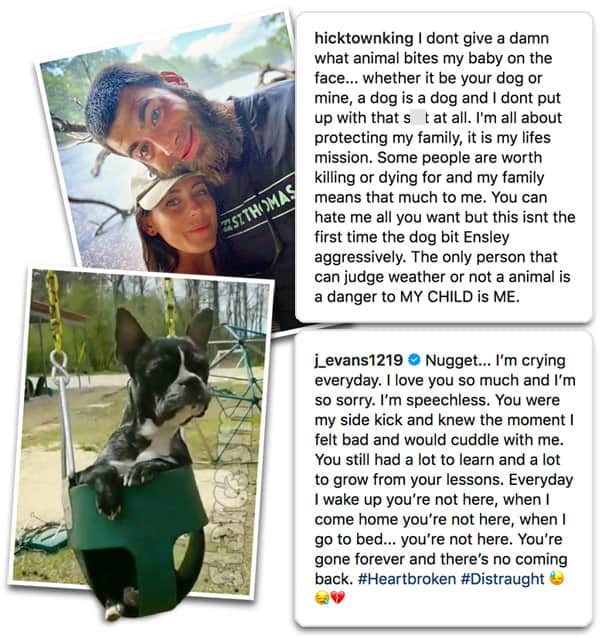 Former Teen Mom 2 star David Eason confirms the startling reports from yesterday that he shot and killed Jenelle’s French bulldog Nugget on Monday after the dog snapped at their daughter Ensley. Jenelle responded to her dog’s death with an Instagram photo and a lengthy caption expressing her grief over losing Nugget. Jenelle also shared details about what happened, and what it means for her and David, in her first interview since the shooting.

DETAILS ABOUT WHAT HAPPENED

“David killed my dog Nugget because he snapped at my 2-year-old, Ensley,” Jenelle tells US Weekly. “He doesn’t put up with that and those are his beliefs.” Jenelle goes on to describe the actual shooting. “He just took her and shot her in the woods … about two acres away from the house.”

Jenelle says the shooting happened after Kaiser and Ensley had come in the house after playing outside. She says that Kaiser, Ensley, and Maryssa were all on The Land at the time of the shooting, but “Kaiser and Ensley had no idea and [haven’t] said anything about it since.” Apparently, David’s daughter Maryssa is aware of what her dad did. Jenelle says the 11-year-old “immediately went to her bedroom and didn’t come out all night until the next day.”

Jenelle’s son Jace is currently on a cruise with Jenelle’s mother, Barbara Evans.

ARE JENELLE AND DAVID GETTING A DIVORCE?

“David and I are not on talking terms,” Jenelle reveals. “I’m too hurt and upset at the fact he did that. It’s taking time to get over this whole situation, and it’s making me feel he’s very cruel and doesn’t have a heart on many ends.”

Jenelle continues: “At this time, we are dealing with this rough situation. I want to focus on what’s best for me and my kids. [Divorce is] in thoughts, but nothing is finalized.”

In case you missed it, Jenelle and David sparked break up rumors on Monday when they both unfollowed each other on Instagram and Jenelle changed her Facebook relationship status to “separated.” Jenelle also made a series of posts on social media suggesting a split, including status updates of “feeling sad” and “feeling devastated” — although those could also have been in reference to the death of her dog.

David Eason responded to shooting French bulldog Nugget with a statement posted on Instagram. It accompanied a brief video clip of Nugget snapping at Ensley while both were on the couch. There was also a photo of Ensley with a reddened cheek. Here is the post — David’s caption is included below:

I dont give a damn what animal bites my baby on the face… whether it be your dog or mine, a dog is a dog and I dont put up with that sh*t at all. I’m all about protecting my family, it is my lifes mission. Some people are worth killing or dying for and my family means that much to me. You can hate me all you want but this isnt the first time the dog bit Ensley aggressively. The only person that can judge weather or not a animal is a danger to MY CHILD is ME.

In other words, a French bulldog that the Easons have had for more than eight months snapped at Ensley, so David wants us to believe that he took the dog outside and shot it in order to protect his family.

Because David may delete the video, combined with the fact that he has a lot of people blocked on Instagram, here is the clip and photo as reposted by @tmmamadrama:

Jenelle’s Teen Mom 2 co-star Briana DeJesus, who is one of the few associated with the show to often defend David, responded to his post in the comments. “You should delete this,” she began, before pointing out that he could have defended his family without having to shoot a French bulldog. “I know you want to protect your baby girl but there could’ve been other ways of doing that. Your wife is already going thru enough and dealing with a lot of unnecessary sh*t. Be her peace ♥”

Jenelle also took to Instagram to address the shooting of Nugget, but her post wasn’t so much about David standing his ground to protect the family. It was instead a post expressing her “heartbroken” and “distraught” grief over the loss of her dog:

In the comments section of Jenelle’s post, her close friend Jamie Lynn Wilshire expressed her sympathy by writing: “Breaks my heart girl! ???? I just can’t even handle it.” Another commenter responded to Jamie by suggesting that she “be a friend and tell [Jenelle] it’s time to wake tf up and get out of that relationship.” Jamie replied: “I already told her.”

NC police confirm that they received a 911 call from an unidentified male caller claiming that former #TeenMom2 star David Eason had shot Jenelle's dog. They made a trip to The Land to investigate and will be posting a report on their visit soon. https://t.co/n60Pp46THo

As we previously reported, police were dispatched to The Land on Tuesday after a 911 call was placed by an unnamed male saying that David had shot his wife’s dog. Here is the latest update on the police investigation from Radar Online:

“Columbus County Sheriff’s Office Deputies responded to the location but were unable to make contact with anyone at the residence,” the [the Columbus County Sheriff’s Department Public Information Officer] said. “A deputy was dispatched to the residence this morning for follow up contact. The deputy made contact with the homeowner, Mr. Eason. The deputy confirmed that the occupants of this residence were okay. There was no evidence to substantiate further investigation.”

As for the dog — a law enforcement source tells TMZ … David told cops Nugget was alive, although he would not let them see the dog. We’re told cops have no evidence showing anything happened to the dog.

The Columbus County Sheriff’s Dept. says it’s contacted Animal Control, but as far as any further investigation from cops … our source says Jenelle would need to make a report on her own. We’re told officers won’t act on “sensationalized media reports or social media posts.” The source said it’s irrelevant to cops what Jenelle says on IG.

JENELLE WANTS EVERYONE TO LEAVE HER ALONE

In the aftermath of the reported shooting, Jenelle was at a friend’s house, but she took to Twitter to clarify to everyone that she did not “run away from home.” She also insisted the Nugget shooting is “MY PERSONAL BUSINESS.” (Apparently it is her “personal business” that needs to be shared exclusively with specific media outlets.) Here are Jenelle’s tweets: 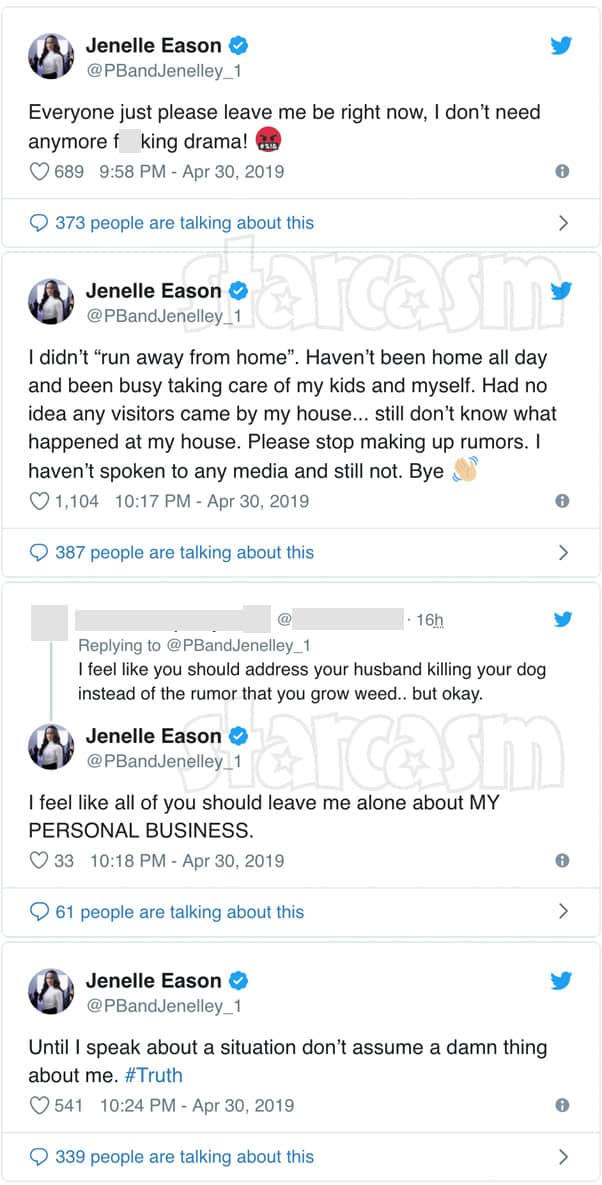 Jenelle iterated her desire to be left alone by fans and the media in her interview with the media: “[I] would like for everyone to just give me my own time right now to figure things out and clear my head,” she told US Weekly.

#TeenMom2 Jenelle & David appear to have broken up again ? Plus, @MTV decides on her future! Oh, and why are people wondering if they are trying to grow pot on #TheLand? Get all caught up! https://t.co/zSxgN8PDIg pic.twitter.com/nnAsOzVaQL

Just prior to the Nugget story breaking, it was reported that Jenelle had a conference call with MTV executives about her future on Teen Mom 2. Numerous producers associated with the show assumed that Jenelle was going to be fired, but that was not the case. The network reportedly decided to keep Jenelle on the show and work with her on trying to find a way to film despite the interference from her husband David.

It’s unclear if the recent incident — especially if Jenelle remains with David — will result in MTV executives having a change of heart and firing Jenelle.

The alleged dog shooting incident is reminiscent of what happened with TLC’s Gypsy Sisters. That show was canceled shortly after the husband of star Mellie Stanley killed their dog during a heated domestic dispute back in 2015. Her husband was later arrested and charged with a felony count of animal cruelty causing death. It should be noted that Gypsy Sisters was on the bubble as far as renewal anyway, unlike Teen Mom 2, which is still a ratings boon for MTV when the “same day plus 7” viewers are figured in. Also, that dog did not “pose a threat to Mellie’s family” by snapping at a kid.

PETA has already issued a statement condemning David’s actions and calling for his arrest, and I am sure there will be yet another petition(s) soon demanding that Jenelle be fired from Teen Mom 2. We will certainly keep an eye on the situation and continue updating.