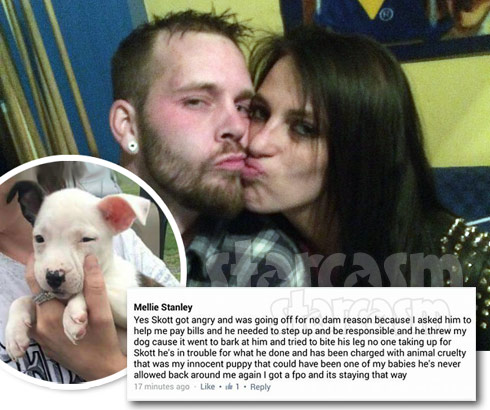 There is seemingly always a lot of drama going on in the day-to-day lives of the stars of TLC’s Gypsy Sisters, which often plays out on social media and online forums. The latest drama with Mellie Stanley is quite terrifying–accusations are flying that her current fiancé (and rumored husband) Skott Vuncannon killed her puppy by throwing it against the wall during a heated argument on Friday.

The shocking story was first reported on the Gypsy Gossip x2 Facebook page in a post that didn’t reveal any specific names. A family member later revealed that it was Mellie and Skott the post was referencing, but some commenters found it hard to believe.

And, in case you can’t read the image very well:

Later, however, Mellie’s Facebook page confirmed that Skott did kill the puppy during an argument:

But that puppy was my life

And then there was this reply from Mellie – unfortunately, I don’t have the comment to which she was responding:

Some commenters were upset that Mellie had seemingly changed gears and was now attempting to defend Skott, and Mellie’s Facebook page–the same one that posted all of the information above about what happened–responded with this angry comment:

There are varying reports as to what happened to Skott. Some are saying he is currently on the run from the law, while others claim he is currently in custody and on suicide watch. One source, who reportedly spoke with the Sheriff’s Department, says Skott is wanted for questioning, and the animal warden is handling the investigation.

For those curious about the puppy involved in the alleged incident, here is a photo Mellie posted late last month when she asked fans for name suggestions: 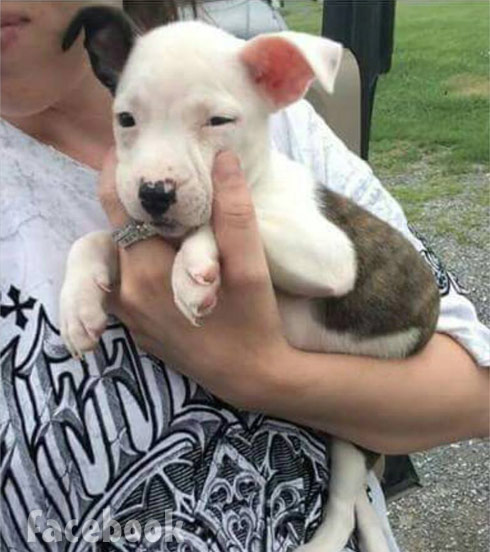 UPDATE – Skott Vuncannon has broken his silence by posting this on his Facebook page:

Never been this type of way mentally I’m so lost I didn’t want it like this I love her I do but I need to get my mind back in the light cuz rite now I’m as dark as the nite…..I don’t not wish to speak to anyone so please nobody message I will b off fb for a while and lay in low no phone nuttin and to the ones who been there I’m sry but I’m lost for words.

That statement seems to jibe with an anonymous letter posted to the Gyspy Gossip x2 page from someone that seems to know Skott very well:

the letter sparked a huge number of comments, including this one from Mellie’s sister and Gypsy Sisters co-star Nettie Stanley:

I’m sorry I have had brothers uncles and my own kid addicted too but if never blame NOBODY man I’ve been through HELL am I an addict NO! That’s BULLSHIT! I’ve already said she’s always breaking men and setting them crazy and all this same bullshit but to blame another for your actions is NOT the answer and MELLIE didn’t make him like that the drug made him like that!

UPDATE – Randall Scott Vuncannon (yes, his real middle name is spelled with a “c”) was arrested and charged with a felony count of animal cruelty causing death. Click the link to read more, including details from the police report that seem to back up the version of Mellie’s story in which Skott threw the dog against the wall. Plus, it has been confirmed that Mellie and Skott are married!

VIDEO New season of Gypsy Sisters coming soon: See what the ladies are fighting about!