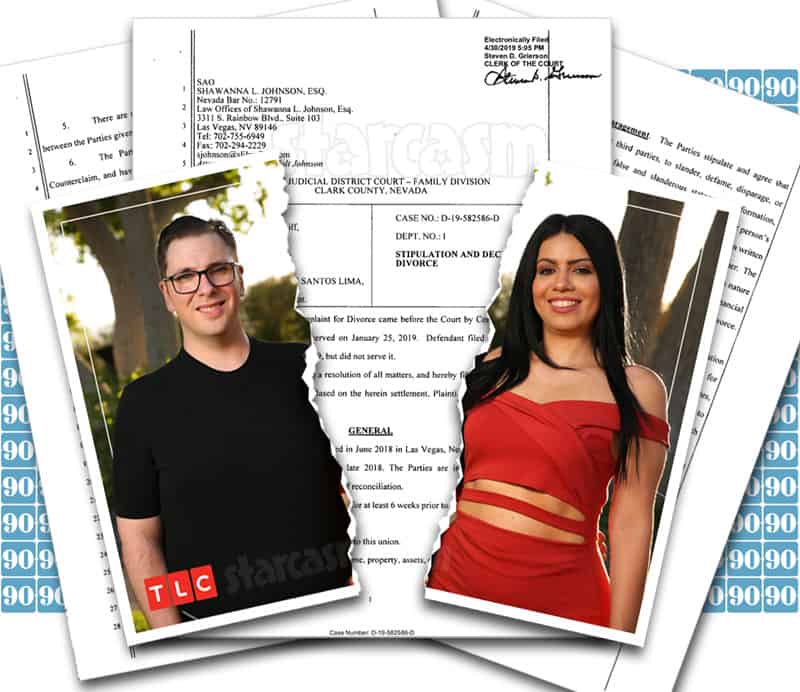 A Clark County judge signed off on the divorce on Tuesday after the couple worked out a deal less than 24 hours before they were scheduled to appear in court earlier this month. According to the court documents (included below), Colt and Larissa reached an agreement that the divorce would be a clean split. That means both parties leave the marriage with what was theirs — which applies to money, possessions, insurance, and debt.

In Larissa’s initial response filing, her attorney had mentioned she would be seeking spousal support in the amount of $1,000 a month. Larissa apparently had a change of heart about that. It’s unclear if Colt gave anything up in exchange, such as agreeing to not push for Larissa’s deportation.

From the divorce filing:

THE COURT FURTHER ORDERS, ADJUDGES, AND DECREES that neither party shall receive spousal support from the other, as they are capable of providing for their own needs post-divorce. The court ORDERS that spousal support is waiver forever and for all purposes.

The court accepts the Parties’ agreement that they have reached this provision knowingly and voluntarily without duress, coercion, or influence.

Due to their being no division of property or finances, the divorce is pretty straight-forward. The only issue that the filing went into detail on was the provision about neither party being able to bad mouth the other in public.

“The Parties stipulate and agree that neither shall themselves, or cause or permit third parties, to slander, defame, disparage, or communicate untruths, malicious statements, false and slanderous statements, information, rumors, or salacious materials of any kind against the other person, or against the other person’s family, friends, employees, employers, or other close relatives and associates, whether in written form, verbally, on paper, on the Internet, on any social media application, or in any manner.”

The “cause or permit third parties” stipulation is very important here given how big of a role 90 Day Fiance social media accounts have had in Colt and Larissa’s issues over the past year.

Here is the rest of the entry about “Communications/Non-Disparagement:”

The Parties agree that any such publication or statement of a malicious, untrue, or slanderous nature could cause the other person great reputational harm, physical and/or mental distress, financial damages, and/or impair his/her ability to earn a living or live a peaceful life post-divorce. Therefore, each Party shall refrain from violating any provisions of this Decree.

These provisions are agreed to between the Parties in recognition of the serious nature and potential horn that could be caused by publishing or causing to be published slanderous statements, rumors, and innuendos. Each Party will take care to avoid negligently or recklessly stating, implying, writing, insinuating, or allowing or causing third parties to commit any violations of this Decree.

Colt and Larissa have honored the stipulation so far as they have both been relatively silent since the divorce went through. Larissa hasn’t said or posted much at all about it, but Colt did share a series of images in his Instagram story commemorating his official re-entry into bachelorhood. They looked to be basic stock images with various messages. “I do, I did…I’m done! JUST DIVORCED,” read one photo. In another, “DIVORCE AF” was spelled out in letters hanging on a string. The final image featured a cake with “Bye Felecia” spelled out in icing on the top.

The Las Vegas strip club that hosted back-to-back divorce parties for Colt and Larissa last month also issued their congratulations to the duo. From the Crazy Horse 3:

Congrats to @larissalimareal and @colteej for finalizing your divorce today! We had a blast throwing a back to back #divorceparty for each of you last month and hope you both live happily ever after! ?‍♀️?? #90dayfiancehappilyeverafter #90dayfiance #larissalima #90dayfiance

I will join the Crazy Horse 3 in saying congratulations to Colt and Larissa! This is CLEARLY 100% the best thing for both of them! All three of them, if you include Colt’s mother Debbie.

So what will happen with Larissa as far as her immigration status and risk of being deported? Colt has stated online and in 90 Day Fiance: Happily Ever After clips that he fully intends to make sure Larissa is deported, but it’s still unclear if he continues to feel that way. Larissa is still awaiting trial for her third domestic battery arrest after her attorney got a continuance earlier this month. I am guessing that the outcome of that case will have a major impact on Larissa’s bid to remain in the United States.

We will continue to update as soon as we know more!

Meanwhile, you can watch Colt and Larissa’s short marriagee implodee completely with new episodes of 90 Day Fiance: Happily Ever After airing Sunday nights at 8/7c on TLC.

Here are the full Colt and Larissa divorce documents — just click the pages to enlarge: 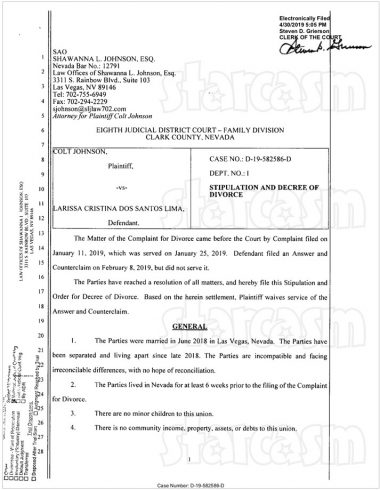 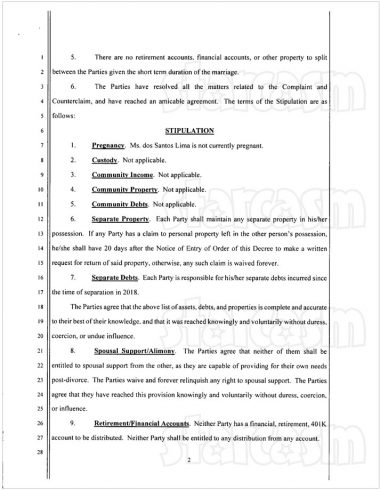 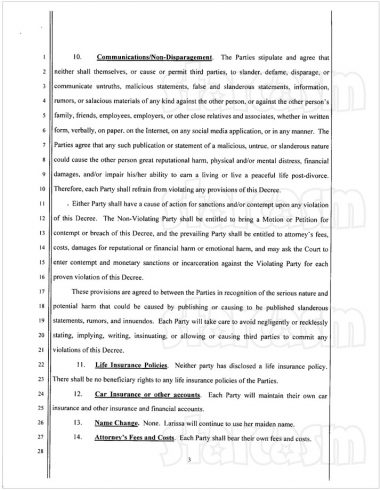 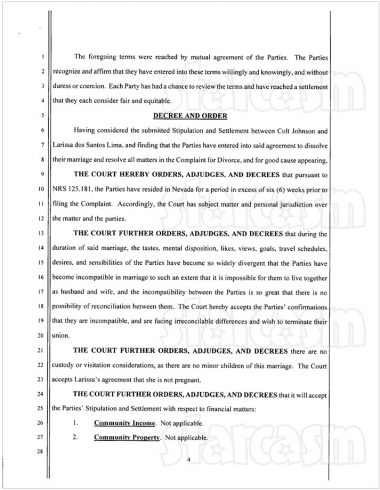 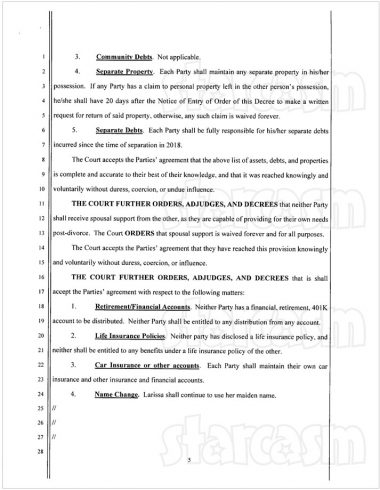 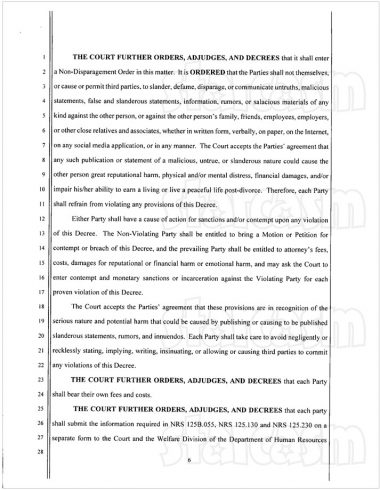 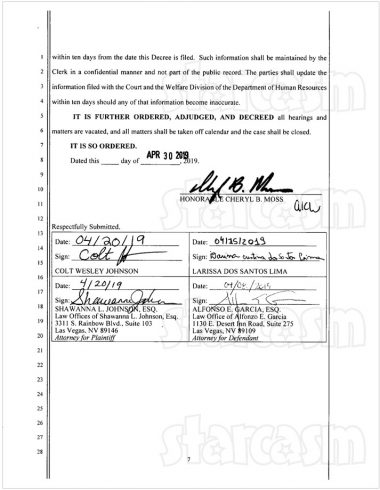 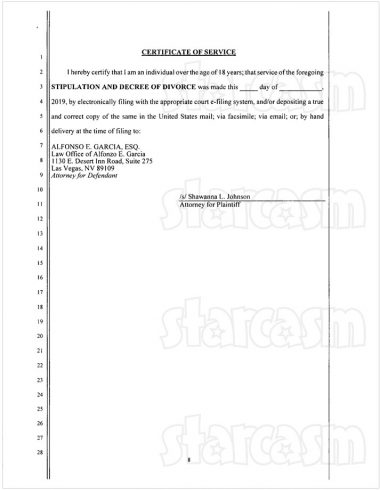