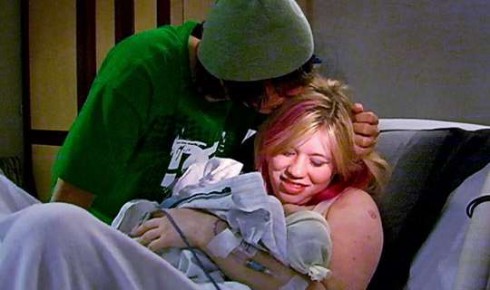 Sure some of the moms and dads featured on MTV’s hit show 16 & Pregnant go on to become Teen Mom and Teen Mom 2 stars and tabloid celebrities with moderate (for the entertainment world) salaries to blow on tattoos and Vegas trips, and maybe a few troubled teenagers are actually thinking of getting pregnant to get on the show (if that’s the case, then those kids would be in trouble anyway), but a new study shows that these shows have actually lowered the rate of teen pregnancy in the U.S. over the past years.

I’ve always liked these shows, and despite the attention and wisps of fame surrounding the girls (and boys) featured, it always seemed like to me, in my gut, that the show would make teens think twice before having unprotected sex, or having sex at all. I’m in my late twenties, and the show has a similar birth control effect on me.

Teenagers are impressionable, and I think that while these shows do show some positive things that happen when you become a parent (these shows would be extremely biased, and unrealistic if they failed to show the joy, love, and special bond that occurs when you have a child,) they also don’t fail to show all the many different types of heartaches and hardships that young mothers have to endure. These types of things make for compelling television AND serve as a great warning lesson for sexually active teenagers.

According to The National Campaign to Prevent Teen and Unplanned Pregnancy study “82 percent of teens say the show helps them better understand the challenges of teen pregnancy and parenthood — and why they should avoid it.” In what may be a very related matter, the U.S. teen birthrate falling dramatically in 2009 after a five percent increase from 2005 to 2007.

“Entertainment media is one of the nation’s favorite punching bags, but we have to acknowledge that when we’re talking about teen pregnancies media can be and often is a force for good, and that is particularly true when it comes to shows like ’16 and Pregnant.” Some critics say these shows glamorize teen pregnancy, but our survey data shows that’s not the case — that not only do they not glamorize it, but teens who have seen it suggest it makes the realities of teen parenthood more real to them.”

Exactly. 16 & Pregnant and Teen Mom make pregnancy very real to teens, and help start up helpful dialogues and conversations with their parents, boyfriends, friends, and themselves. And that’s a wonderful thing. Carry on, MTV.