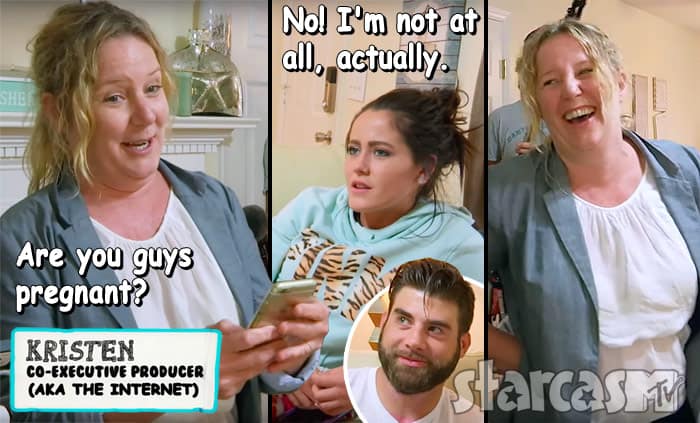 There are a lot of things to look forward to on the new season of Teen Mom 2, but none have me more excited than watching how Jenelle Evans’ current pregnancy is reluctantly revealed. In the full season preview trailer we see Jenelle’s mom Barbara Evans finding out via an internet article, and in a preview clip for next week we see that producers figured it out thanks to flip cam footage of Jenelle and David — who of course claim their conversation wasn’t about her being pregnant, but was about how shocked they were to be buying land.

OMG! That scene is such the perfect analogy for what happened online! Jenelle’s producer Kristen is playing the part of the internet while Jenelle and David play themselves!

UPDATE – Jenelle has responded to the preview clip by first promising a Periscope video to explain editing before realizing that MTV plans to release a bonus deleted scene that will accomplish the same task: 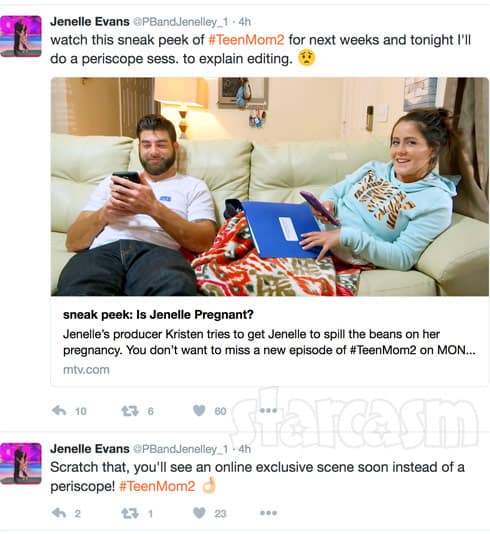 After responding to our tweet about this post, Jenelle retweet ‘n’ deleted someone who apparently guessed what the explanation was for the clip: 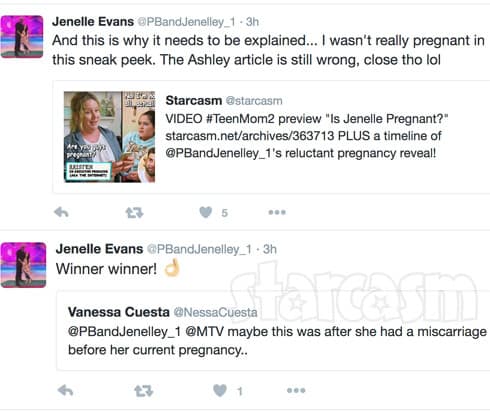 So it appears that the clip was filmed after Jenelle had her miscarriage in late April/early May but before she got pregnant again. (Complete timeline below.)

In case you missed it, here is a timeline of how all the Jenelle Evans pregnancy drama played out in real time:

MAY 3 – Jenelle responds to rumors that she is pregnant after photos of her at the Teen Mom 2 Reunion taping seem to show her with a baby bump. ““For everyone asking.. No I’m not pregnant and no not engaged,” she posted on Facebook. “Happy where I am in life and comfortable so I’ve been eating a lot more lol.” Perhaps that trend has continued?”

MAY 13 – Jenelle Evans Babygate EXPLODES! The Ashley’s Reality Roundup confirms that Jenelle is pregnant on the same day that a photo surfaces online showing Jenelle with what appears to be a rather sizable baby bump while she was shopping at Target: 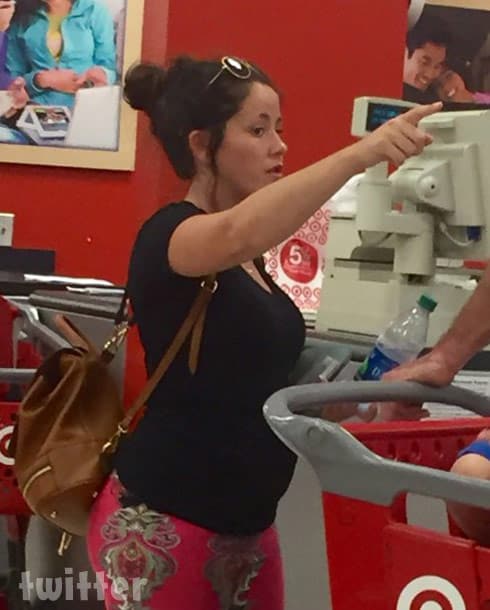 MAY 14 – Jenelle adamantly denies The Ashley’s report that she is pregnant. Here is one of her responses:

I just wanted to put it out there and since Ashley never spoke to me direct or my team on the “exclusive” you’re wrong ! I am NOT pregnant and if I were I wouldn’t be afraid or scared to tell you “my fans” who support me. But hey if this story gets you attention have a good weekend 🙂 and enjoy the attention ! #lies #whywouldilie #ashleyslying 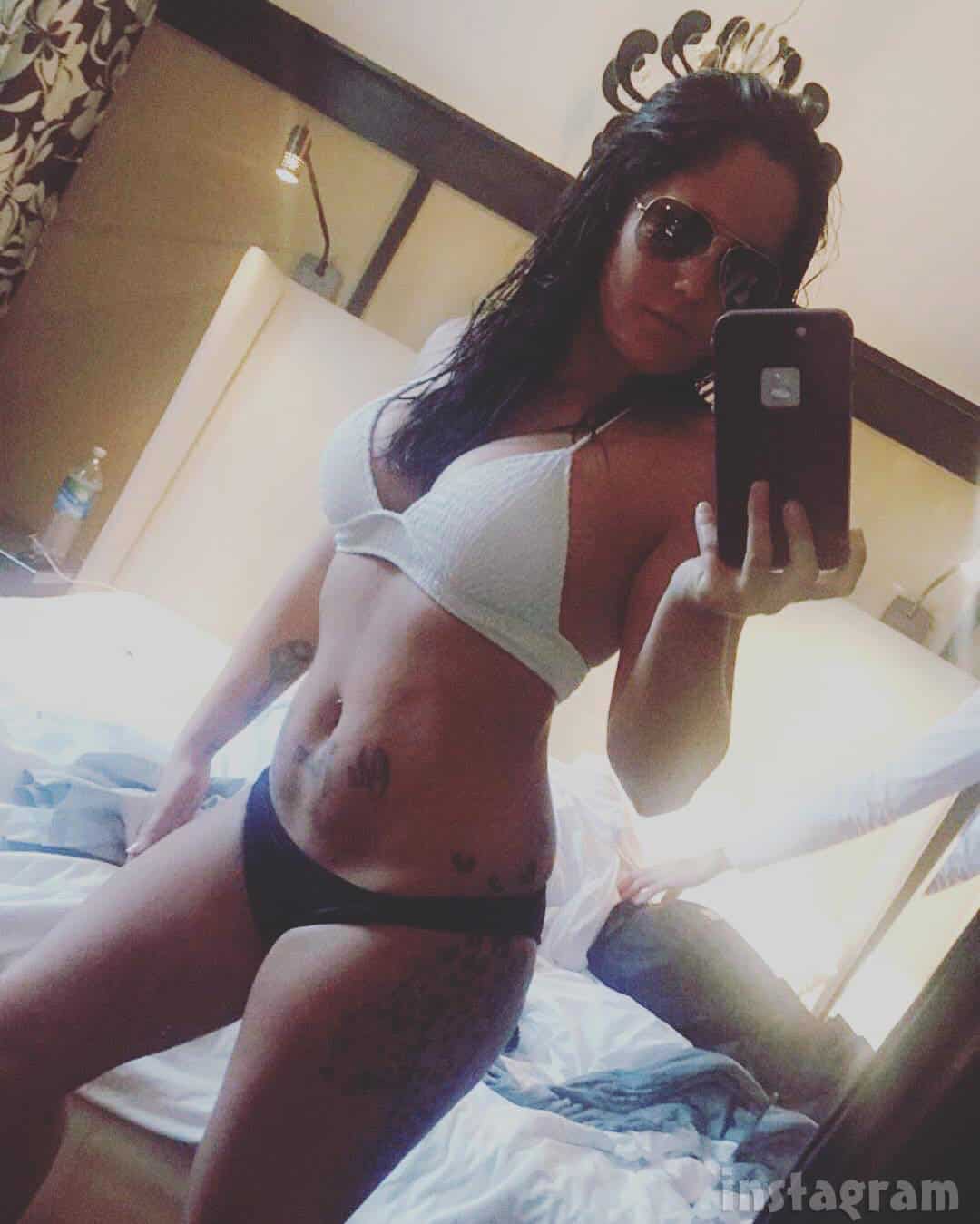 MAY 20 – Jenelle posts a bikini selfie (above) taken while in Miami to attend Farrah Abraham’s 25th birthday party (back when both of them were still associated with promoter Johnny Donovan). “Once again, not pregnant…” Jenelle wrote in the caption. “Lol yes I’ve gained weight, healthy weight. This what happens when you are truly happy in life and in a healthy relationship. Getting back in my workout grind tho! ????” The Jenelle pregnancy conspiracy theorists questioned when the photo was taken, speculating that it might be an older photo.

MAY 22 – Photos of Jenelle at Farrah’s birthday party surface which show Jenelle wearing a pair of VERY high-waisted shorts. 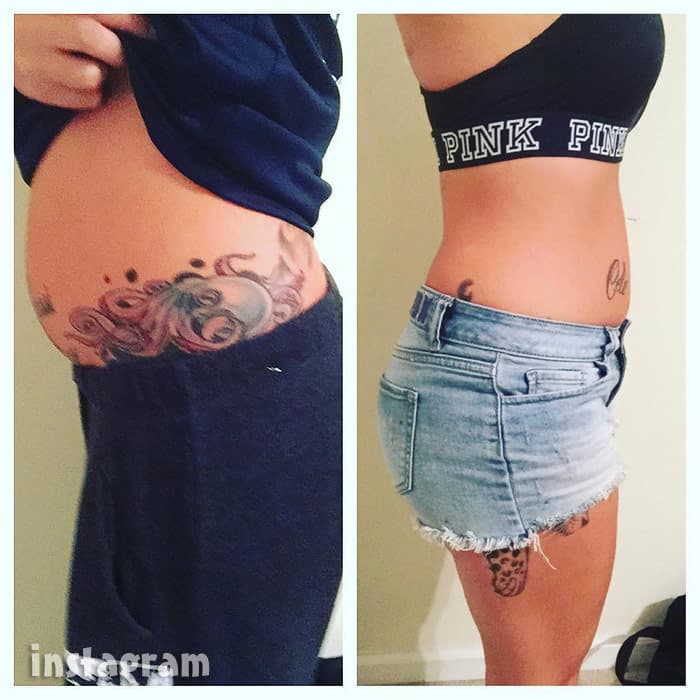 JULY 1 – Jenelle seemingly trolls the pregnancy truthers by promoting Flat Tummy Tea with side-by-side photos of her tummy (above). The “before” photo featured a large belly and was clearly recent (based on the presence of Jenelle’s octopus tattoo). The “after” photo that showed off Jenelle’s much tighter abs was flipped around so the timing could not be verified. (If that really is Jenelle’s pregnant belly in the “before” photo then I cannot imagine Flat Tummy Tea would want it implied that their product can make pregnancies go away!)

JULY 6 – David Eason is involved in a minor car accident with Jenelle as the passenger.

JULY 15 – The jig is up! A police report surfaces from the automobile accident on July 6 in which the officer reveals that Jenelle “stated that she is at least ten weeks pregnant.” This is the police report that Barbara Evans can be seen referencing when she confronts Jenelle about her pregnancy in the Teen Mom 2 Season 7b preview trailer.

JULY 16 – Jenelle reacts to the police report spoiling her pregnancy announcement by sharing some hateful comments she received. An excerpt of her post:

I don’t understand what is “disappointing” or “sad” ?! Why not ask if I’m ok from the car accident?! Why not be concerned about my health?! I want privacy. All of you disgust me. It’s all about gossip these days… Funny someone else comes out with news they are pregnant and the world is overjoyed.

It was assumed that Jenelle was referencing her co-star Chelsea Houska when she said “someone else comes out with news they are pregnant and the world is overjoyed” because Chelsea had just announced she was pregnant again. Jenelle also lashed out at Kail Lowry, though it is still unclear exactly what Kail did to anger her.

JULY 18 – Jenelle deletes her Twitter account after clarifying that her previous comments were not about Chelsea Houska:

This wasn’t about Chelsea … Wow lmao look how they twist everything around. When I said when “someone has a baby” I meant anyone in general. Tabloids always starting some drama. ?

Btw, I have multiple personal friends that have announced they are pregnant on fb.

JULY 22 – Jenelle Evans returns to Facebook after a 4-day hiatus. She responds to an online article wondering if she is going nuts:

Now I’m going nuts cuz I deactivated my accounts ?! Hahahaha ???. This is the reason why I deactivate my accounts. I get back on fb after a week and this is what I see?! Nice. ?? social media has ruined society to its fullest. ?

Jenelle then shifts attention to the fact that she and David have purchased land on which they plan to build a house. (Much like the Teen Mom 2 preview clip that started this post!) 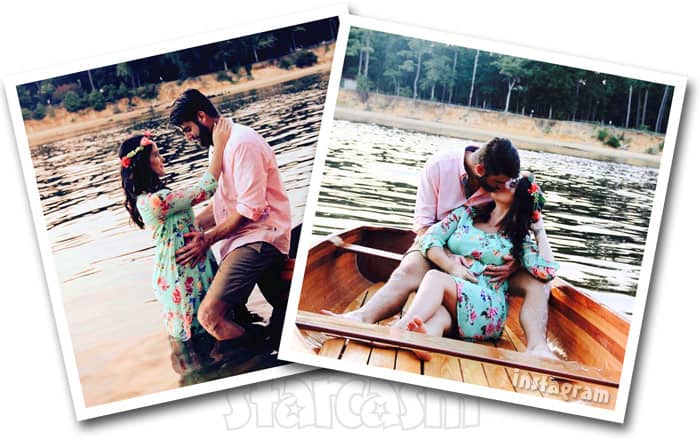 AUGUST 24 – Jenelle FINALLY officially confirms that she is pregnant again with a gender reveal photos shoot with dad-to-be David Eason. “Time to introduce the world to our baby girl soon, Ensley Jolie Eason,” Jenelle wrote. “She will be arriving Jan. 28th. We couldn’t be any happier! ??? @easondavid88 #BabyEnsley”

Jenelle’s detractors were quick to do the math and realized that Jenelle’s due date did not line up at all based on The Ashley’s report back in May. More on that in a minute.

AUGUST 25 – Jenelle Evans’ sister Ashleigh shares her reaction to the pregnancy news. “It’s sad, 3 babies all different dads before 25, no real job skills, no formal education, no life skills. I hope someday she realize that she’s done a lot of hurt.” Ouch! (I’m including Ashleigh’s reaction because she appeared on the Being Babs special and may make another appearance this season. I believe Jenelle has stated in the past that she refuses to do the show if Ashleigh is on it, however, so I think the chances are slim.)

AUGUST 26 – Jenelle reveals that she suffered a miscarriage in April before getting pregnant again because of a “cheap” condom. (Click the link for more details, including an exact timeline for when Jenelle found out about the first pregnancy and then got pregnant again.) The prior pregnancy makes Jenelle’s January 28 due date work with The Ashley’s initial report back in early May.

I think that gets you all caught up! As of today, Jenelle is still pregnant and still looking at January 28 for daughter Ensley’s arrival.

Meanwhile, you can see all of the above drama play out on Teen Mom 2 with new episodes airing Monday nights at 9/8c on MTV!