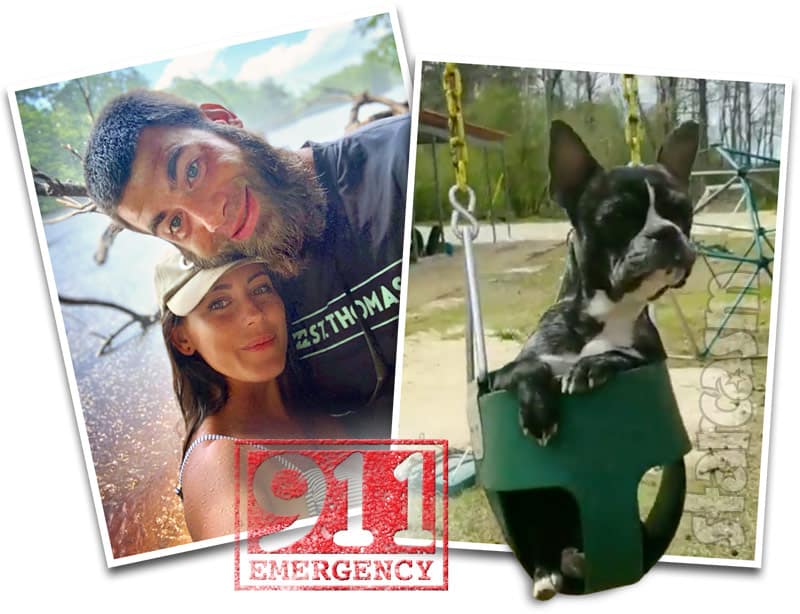 We reported earlier today that Teen Mom 2 stars Jenelle and David Eason appear to be having more relationship issues, and now we are finding out that police visited The Land today investigating a 911 call alleging that David shot Jenelle’s dog!

Radar Online broke the new moments ago, reporting that a “frantic” 911 call was placed by an unidentified male today with the accusation. The caller was then referred to a non-emergency number.

“A call was made today, and it was relayed that the woman’s husband had killed her dog,” the Columbus County Sheriff’s Department tells Radar. “The Sheriff is out there right now investigating and there will be an incident report filed later.”

The Ashley’s Reality Roundup later reported that the dog that was allegedly shot is Jenelle’s Frenchie mix, Nugget. According to David’s Instagram, they got Nugget in August of last year.

The Ashley’s source did not confirm that the dog was shot, but did share details about what allegedly happened. “The alleged dog murder allegedly happened on Monday night after the dog allegedly snapped at Jenelle’s daughter Ensley,” the Ashley reports. This all lines up with some of Jenelle’s posting about “feeling sad” etc., which was previously attributed to the Teen Mom 2 episode and/or her current relationship issues with David.

Jenelle and David both have a history of issues with their animals, dating all the way back to Jenelle’s headline-grabbing crating of her dogs in an episode of Teen Mom 2 back in 2014. Those scenes led to PETA’s Project Manager of Animals in Film and Television, Merrilee Burke, writing a letter to Jenelle. The Teen Mom 2 star would initially thumb her nose at PETA, but after the backlash continued, she later shared a PSA video on MTV in which she apologized for how she treated the dogs.

In 2015, Jenelle made headlines again after posting a photo of her dog Jax playing fetch with a lit firework.

Earlier this month, David Eason was seen in a video violently dragging a pig.

It’s important to emphasize that we don’t know anything more for sure other than the fact that a 911 call was made by an unknown male accusing David of shooting Jenelle’s dog. Jenelle detractors can be very passionate, and they have been known to step over the line on occasion. I am sure will will know more soon about the police visit to The Land, so stay tuned!

UPDATE – Radar Online has multiple sources confirming that David Eason shot and killed Nugget after the dog “snapped at Ensley.” An “insider” tells the site that after Nugget snapped at Ensley, “David took the dog outside and shot it. Point blank.”

“He killed the dog because it snapped at his daughter,” a second source confirms. “But that’s no excuse. No words.”

After the incident, one source tell Radar that Jenelle left The Land and is currently staying at a friend’s house. “She’s devastated,” a second source close to Jenelle tells Radar. “She doesn’t want to go home. She just picked up the kids.”

Jace is reportedly on vacation with Barbara, so it is assumed that “the kids” is in reference to Kaiser and Ensley.

UPDATE – David has admitted to shooting the dog in order to “protect his family.” Jenelle posts a photo of Nugget and expresses her grief. She also does her first interview since the shooting in which she describes what happened and reveals that she and David are “no longer on talking terms.” Click here for all the latest.