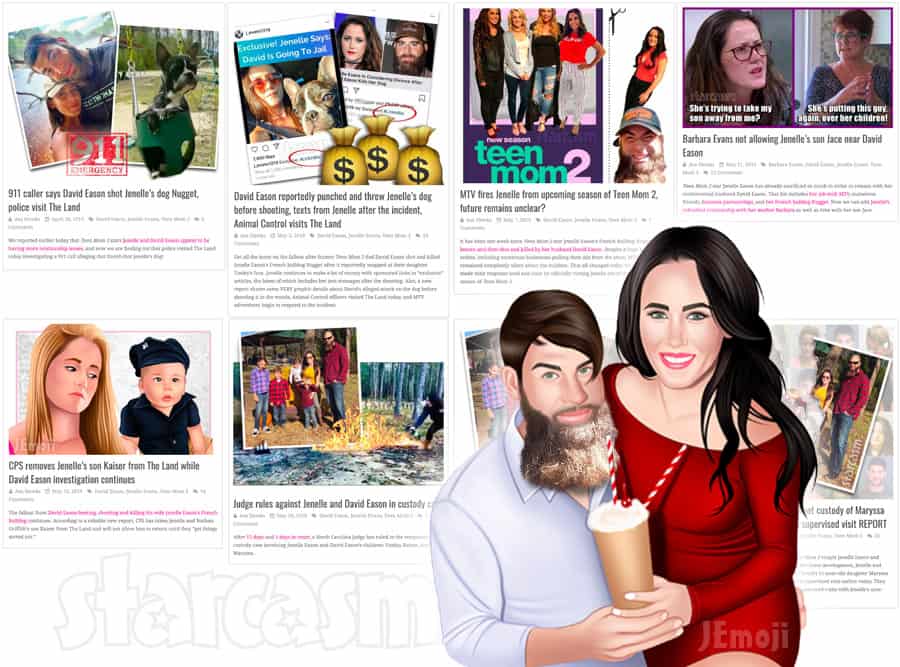 Less than one week after a North Carolina judge upheld a CPS order removing Jenelle and David Eason’s children from The Land, the disgraced couple decided to capitalize on the alone time by going on vacation. Meanwhile, Jenelle’s mom Barbara Evans shared photos of Jace and Ensley enjoying a local Coast Guard event with their cousin.

JENELLE AND DAVID HEAD TO DC

First, Jenelle and David’s vacation. Radar Online reports that the two are currently in Washington, DC. “They lost custody on Friday and jetted off to Washington, DC for a day trip on Saturday,” their source claimed. “They seem to be enjoying having no kids and no responsibilities,” the source added.

However, it could be that Jenelle and David’s trip wasn’t just recreational. Radar says they reached out Jenelle’s rep, who says the two are in the nation’s capitol “for meetings for her makeup line JE Cosmetics.” In case you were unaware, Jenelle continued to promote the imminent release of the JE Cosmetics eyebrow kit throughout her and David’s recent dog shooting sandal and resulting custody issues.

At this point, it seems like a disastrous idea to follow through with the eyebrow kit launch, but all signs indicate Jenelle still plans to do it at some point soon. (TMZ reports that she’s “targeting an August launch.”)

The Ashley later tweeted that Jenelle and David were back on The Land and “They went to DC for memorial weekend.” That had me looking back over the Radar Online report, and I realize they had a date half wrong — which caused some confusion. “The fired Teen Mom 2 star wasted no time enjoying her childless life after a North Carolina judge ordered all of her children taken away from her on Friday, May 28.” The judge’s ruling was actually on Tuesday, May 28.

“They lost custody on Friday and jetted off to Washington, DC for a day trip on Saturday,” Radar’s insider said, adding to the confusion.

It now looks like David and Jenelle made their trip to DC after their final custody hearing on Friday, May 24, but before they heard the judge’s ruling.

Radar also backed up The Ashley’s report that Jenelle and David are no longer seeking custody of his 11-year-old daughter Maryssa after she didn’t want to meet with David during a scheduled visitation on Thursday:

An insider confirmed to Radar that they are no longer fighting for custody of Maryssa, David’s daughter from a previous marriage. “Jenelle and David are saying Maryssa is a liar,” a source told Radar, as a second source added, “She had an attitude during the visit.”

Radar’s multiple sources seem conflicted on how Jenelle and David are reacting to last week’s custody ruling. “Jenelle really doesn’t seem like she’s trying very hard. She and David are acting like this is a treat for them,” one insider tells them.

However, another source makes it sound as though they are actually willing to do what it takes to regain custody of at least Ensley and Kaiser. “She signed up for parenting classes and marriage counseling,” a second source tells Radar about Jenelle. “They’re looking to get David a psych evaluation for court. The court is ordering this next week, but in the meantime they are jumping ahead so when they go they can say, ‘We’re working on our marriage, we’re working on this.’”

A source for TMZ (perhaps the same one?) also says Jenelle and David are actually trying:

Sources close to Jenelle and David tell TMZ … since losing custody of all 3 kids Tuesday, the couple has enrolled in marriage counseling, signed up for parenting classes and David’s got an upcoming psych evaluation to find the root of his anger issues … all conditions set by the judge if they hope to get the kids back.

Meanwhile, Teen Mom 2 fans following this tragic story as it unfolds online got a rare reason to smile this weekend, when Barbara Evans shared numerous photos of Jace and Ensley out with their cousin Gabriel.

Babs and the kid were enjoying “Public Safety Day” being held at the US Coast Guard’s Oak Island station on Saturday. During the hours of the event, there was free admission as the kids (and adults) were able to tour Coast Guard police and fire vessels, patrol vehicles and Coast Guard aircraft. And from the looks of it, Jace, Ensley and Gabriel had a blast!

If you are curious about Gabriel, he is the son of Jenelle’s sister Ashleigh. Barbara explained in the comments section of one of her Instagram posts that Gabriel stays with them on weekends.

Kaiser’s dad Nathan Griffith and his girlfriend Ashley Lanhardt are currently in New Jersey for a friend’s wedding. Judging from their social media postst doesn’t appear that Kaiser is with them. I would guess that Kaiser is currently with Nathan’s mother Doris.

TEEN MOM 2 Jenelle & David attack Kail, respond to report that MTV crew is scared of him