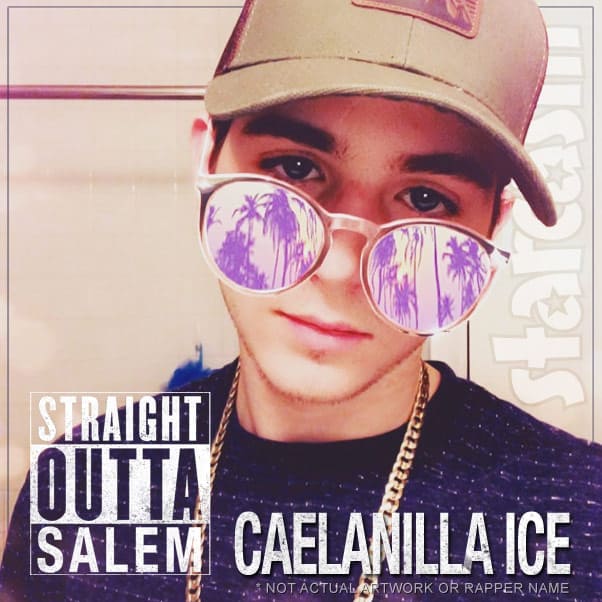 While Unexpected mom McKayla Adkins continues her bid to win free plastic surgery, her ex Caelan Morrison is heading to the recording studio in hopes of launching his new career as a rapper!

20-year-old Caelan shared the news with his Instagram followers on Friday by posting a screen capped text message exchange with “Ashley TLC,” who I assume is a producer on the show. The texts included a photo of the inside of a northeast Ohio recording studio, along with a message: “Caelan, we secured a recording studio for you in Beloit to record your song tomorrow at 4pm.”

Caelan shared a brief video in his Instagram story earlier today actually in the recording studio, and he wrote over top of the clip: “LET’S GOO.”

If you’re curious about what kind of skillz Caelanilla Ice (my moniker, not his) brings to the studio, you can hear a sample in the form of his track “Don’t Know How To Love,” which he uploaded to SoundCloud back in early April. As you might have guessed, the track seems to be about his relationship with McKayla.

Give it a listen:

Caelan concludes the song by turning the lyrics on himself as he expresses his frustration at feeling helpless in the face of this person’s inability to love:

So far, McKayla has yet to respond to Caelan’s announcement that he is laying down some bars in the studio. My hope is that this will turn into a back and forth, with McKayoncé heading into the studio herself for a response diss track! Maybe “He Don’t Know How To Rap.” 😉

It appears as though TLC was filming Caelan in the studio, so I assume this will all be featured on Unexpected Season 3. Unfortunately, we still don’t have even a rough idea when the show will be coming back. They’ve been filming for quite a while, and I expect TLC will be making an announcement soon, so stay auto-tuned!

On a side note, I wanted to go with BDWA on the Straight Outta Salem album cover art, but I thought a lot of folks wouldn’t get that it stood for Baby Daddy With Attitude. Of course, that might wind up being a much better group name if all the dads from Unexpected team up together!

On another side note, if you’re thinking that someone from a reality show about teen pregnancy trying to launch a rap career is odd, there are actually several precedents. Just click here for a sampling of the numerous stars from MTV’s Teen Mom franchise going hip hop — including Farrah Abraham, Bariki “Bar” Smith, Debz OG, Jace’s dad Andrew Lewis, Jo Rivera, and Mackenzie McKee.

UNEXPECTED Did Laura and Tylor break up? Is he already dating other people?!