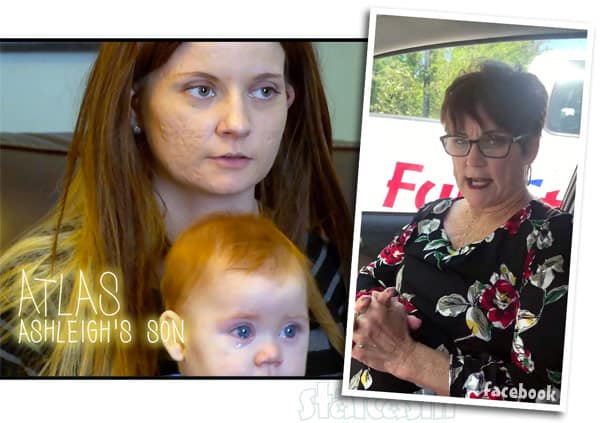 It has been a crazy week for Teen Mom 2 star Barbara Evans! Just as she is having to deal with the fallout from her daughter Jenelle Eason reportedly pulling a gun on a man after a road rage incident (with Jace in the car), Barbara is also trying to help her other daughter Ashleigh regain custody of her almost-three-year-old son Atlas. Unfortunately, Ashleigh’s recent court appearance did not go well — AT ALL — and now Barbara and Ashleigh are saying they will be going on national television soon to expose the “Onslow County corrupt judicial system.”

Before I get to the recent developments in court, let me set the stage just a bit. Ashleigh has an older son named Gabriel, who looks to be roughly the same age as Jace, with her first ex-husband. That relationship ended after claims that he was abusive. Ashleigh also has a son named Atlas (who turns three on June 18) with her second husband named Lee. Atlas was the cute little red-headed boy featured with Ashleigh in the Being Babs MTV special, and he is the little boy at the center of the custody battle.

Ashleigh and Atlas’s father Lee have had a very acrimonious custody battle over Atlas since he was born, including multiple accusations of kidnapping and a high-speed police chase. Lee now lives in New Jersey and has primary custody of Atlas. However, Ashleigh claims that she only signed off on the custody arrangement because her attorney didn’t tell her the specifics of the deal she was agreeing to. That was more than two years ago, and since that time she has been fighting for another day in court.

According to online records, that day in court happened this week. The court docket states that Lee had filed a motion to suspend visitation and transfer jurisdiction from North Carolina to his home state of New Jersey. (Lee posted online two weeks ago that he had primary custody of Atlas and was currently fighting for full custody.)

In response, Ashleigh’s legal team filed a countermotion in which they asked that she receive temporary and permanent custody of Atlas. The filing included numerous examples of alleged medical negligence on the part of the father, which they later summed up:

The Defendant [Lee] has not provided proper care for his minor child and the minor child is undergoing serious health issues that have been confirmed time and time again by physicians in North Carolina.

Instead of addressing the issues, the Defendant [Ashleigh] filed this Motion to suspend Plaintiff’s visitation and ignored the North Carolina physicians and has grossly failed in his care of the minor child while continuing to attack the Plaintiff.

Judging from Ashleigh and Barbara’s reactions, it appears that the judge ruled in favor of Lee as far as custody and jurisdiction. I believe their next court hearing was scheduled for June 26. It’s unclear if they will keep that date if the case is moved to a New Jersey court.

Ashleigh took to Facebook immediately after their court appearance to share a video of her mother Barbara in which Barbara explains what happened and reveals that the mother-daughter-duo plan to share their story on national television soon. Here’s the video:

The video starts with a seemingly flustered Ashleigh holding the camera directed at Barbara as she hurredly says: “Tell ’em mom! Tell em what just happened in court! Tell ’em what we’re gonna do!”

Barbara does just that. “So we went to court today for my grandson Atlas, and my son-in-law’s attorney, Ann Maready, lied to the judge,” Barbara says. “They all lied. Everybody lied,” she adds, before going after the local court system. “Onslow County is so corrupt that we’re going on national TV and we’re going to blow this out of water — how Onslow County is so corrupt.”

“My daughter Ash has done nothing wrong, but take care of her child” Barbara continues. “The baby’s being neglected, and nobody cares. But we will fight this, and fight it until the end.”

She concludes by vowing: “If we gotta go up there to New Jersey and fight it, we’ll fight it until we cannot fight no more.”

Here’s an Instagram post from Barbara shared back in August featuring her three grandsons: (from left to right) Gabriel, Atlas, and Jace: 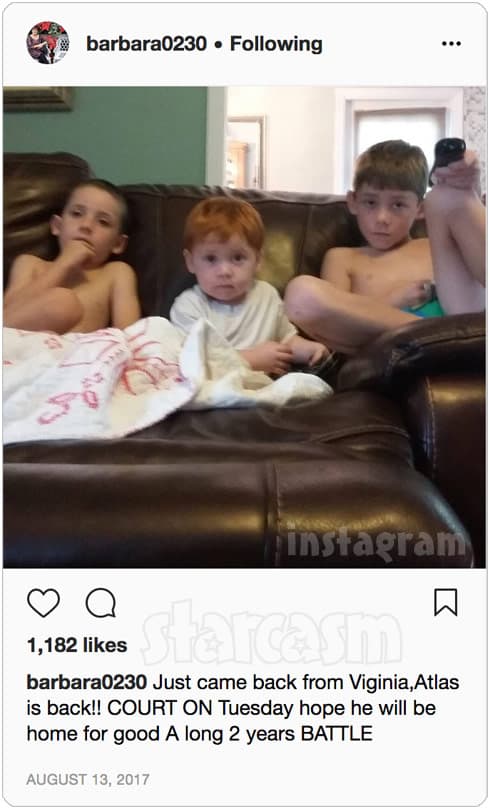 Ashleigh then asks Barbara to talk about how Lee allegedly kidnapped Atlas. “This man…kidnapped a baby out of my home when he was six months old,” Barbara says. “And he’s been in contempt of court and everything for years. We’ve been fighting this for almost three years. And now the baby is going to be neglected, and this guy gets away with murder.”

Barbara says they are going to try to get as much exposure as possible with the story. “First we’re going to report it to the media, and I’m going to make a huge story out of this. And we’re going to get this Onslow County corrupt judicial system under wraps.”

After posting the video, Ashleigh talked with commenters and shared how Atlas’s big brother Gabriel is taking the news. “Gabriel is crying right now. He just wants his brother home. He said he remembers all the bad things he did to all of us. He said it’s not fair.”

More from Ashleigh in the comments section, with some slight grammatical alterations:

COMMENTER: Did they transfer the case to New Jersey? Hell no he won’t, keep fighting girl! Someone will see him for what he’s worth!

ASHLEIGH: Yep. For no unjust reasons. I can’t even see Atlas anymore at all. All my calls have been blocked for months. He will not get away with this, because I’ve done nothing except do what’s best for him and get tubes in his ears as his doctors recommended. Our appeal never went it [sic].

COMMENTER: That’s bullsh*t. Praying the next judge has common sense

After revealing that Barbara was getting contacts from MTV for someone to share their story with, Ashleigh says that they would be “going on national TV within a week.” She did not provide any specifics as to which show or network.

This is actually the second time Ashleigh has stated she was taking her case to national television. Back in November she expressed her frustration at the legal system in relation to her custody battle and announced her television plans:

Ashleigh explained more in depth what happened with her attorney that caused her to unwittingly sign away primary custody of Atlas. She also posted a video clip with a female friend at her mother-in-law’s house as she asked to see Atlas before hastily grabbing him and running to her car.

Click here for a complete recap of all of Ashleigh’s custody issues with Atlas, in addition to a timeline that also includes Ashleigh’s very public feuds with her sister Jenelle.

PHOTO Are Jenelle Evans and Kieffer Delp back together!?