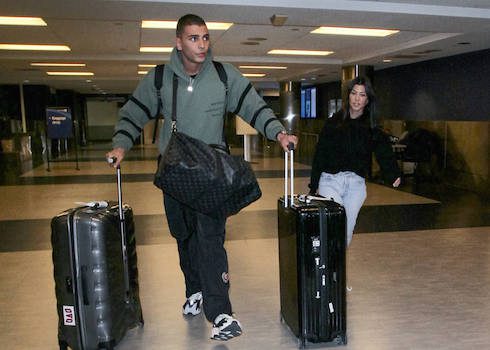 Kourtney Kardashian has been with her hot young model boyfriend Younes Bendjima long enough to start thinking about serious long-term plans with him. But is Kourtney Kardashian moving to Paris for Younes? According to a new report, Scott Disick is “jealous” and enraged over the news that Kourtney is giving serious thought to uprooting their three children and raising them internationally.

Younes, who has reportedly been making plans for a baby with Kourtney for months, is said to be “missing home” and apparently “dreams of of living in Paris with Kourtney and her three children so that he doesn’t have to continue to split time between his two homes.”

At the same time, Kourtney is said to be “consider[ing] staying in Europe with Bendjima for a few months” and is willing to try it out this summer. She also allegedly “thinks it would be good for [Mason, Penelope, and Reign] to be more international.”

One person who is decidedly not on board with this plan? Kourtney’s baby daddy Scott Disick, who, per Hollywood Life’s take, flew into a rage when he heard about Kourtney’s intentions.

According to their anonymous insider, Scott has “promised Kourtney a huge battle if she goes through with her plans to move to Paris with Younes and the kids.” But Scott’s threats no longer work on Kourtney, said the same insider, who noted that, legally speaking, “She’s the one who holds all the cards.”

The best part of Hollywood Life’s article was the insider getting super catty and further explaining that Kourtney views any summer-long Parisian jaunt as an extended vacation — something Scott knows all about. “It would only be for a few months and it’s not like he couldn’t come visit them,” said the source. “He loves being in Europe in the summer!”

Devotées will recall that Scott spent the entire summer of 2017 on a worldwide Sexual Revenge Tour against Kourtney after he tried to sneak a lady friend along for the Kardashian family’s Costa Rica trip and Kourtney gave him an unceremonious boot. During his SRT, Scott dated no one over the age of 20 in what was widely seen as an attempt at getting under Kourtney’s skin.

Kourtney, meanwhile, responded by going public with Younes, whose abs have fans gloating to this day. Scott also tried a power move by threatening to walk from Keeping Up With The Kardashians unless the family added his girlfriend Sofia Richie to the cast; the move flopped like a dive into an empty pool.

It’s hard to see what Scott expects to gain from either threatening Kourtney with a “battle” or actually following through on the threat. It doesn’t appear that Scott has any legal right to custody of he and Kourtney’s three children; if that’s true, it means he gets to see them only because she lets him. Sit-ups, rather than aggression, are probably the way to go for Scott.

Anna Duggar in ‘high spirits’ after spending Christmas with Josh, but more legal problems could await

Which Housewife is reportedly getting fired from Real Housewives of New York City?