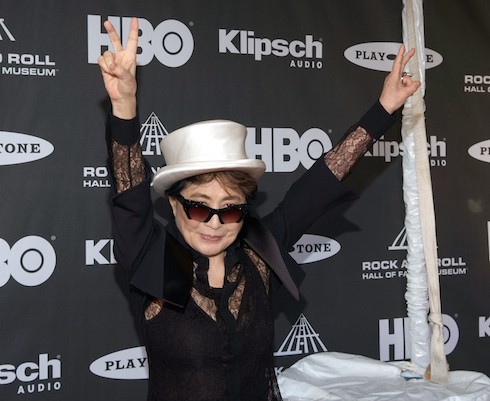 Was there a Hillary Clinton affair? “Did Hillary Clinton have an affair with Yoko Ono?” became the question of our time this weekend, when a new interview with the legendary rock star went viral. Some wonder whether Yoko’s claim is politically motivated; others say this has been an open secret for years. Most of us found ourselves saying: “Huh?”

Here’s what Yoko (allegedly) said, in an interview with World News Daily Report:

We met many times during the New York Vietnam War protests in the 1970s, and became very intimate. We shared many of the same values about sexual equality, fighting against the authoritarian, patriarchal, male-dominated society we were raised in….We had a brief romantic fling when I lived with John in Manhattan and Hillary was studying at Yale, but eventually we lost touch. I am amazed how things are going well for her and wish her the best for her campaign.

The caption for the photo of Clinton that accompanied the original article laid it on pretty thick, stating that Clinton “has been hit by a series of allegations of being a lesbian in her career which could ruin her bid for the presidency, believe some experts.”

This led several sites to pick up the story and run with it, while bigger, mainstream outlets did their homework. The problem with the story–which is subtle enough to maybe, possibly be true, especially if you really want to believe “negative” things about Hillary Clinton–is that World News Daily Report is as fake as The Onion, and nowhere near as entertaining. Hidden in tiny print on the site is this disclaimer:

World News Daily Report is a news and political satire web publication, which may or may not use real names, often in semi-real or mostly fictitious ways. All news articles contained within worldnewsdailyreport.com are fiction, and presumably fake news. Any resemblance to the truth is purely coincidental, except for all references to politicians and/or celebrities, in which case they are based on real people, but still based almost entirely in fiction.

It’s also a bit of a stretch to think that this admission could do serious damage to Clinton’s presidential campaign. By now, there can’t be more than six or seven registered voters left in America who do not have a long-formed opinion of Hillary Clinton. Finding out she slept with a woman a few times forty years ago hardly seems a preliminarily fireable offense.

International media decided to go along for the ride, though, as a Google News search for “Hillary Clinton Yoko Ono” returns more Spanish-, German-, and Portuguese-language stories than you can read in a single sitting.

Unfortunately, a typo-inspired search for “Hillary Klingon” returns nothing.

Tyga can’t convince Kylie Jenner he isn’t trying to get with a 14-year-old: Report