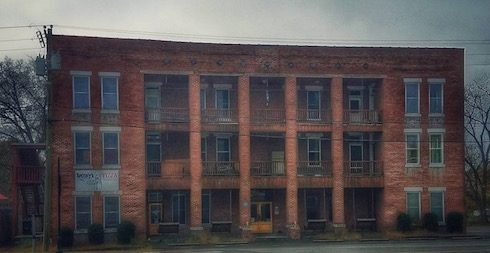 The Tennessee Wraith Chasers‘ latest investigation takes them to Wartrace, a small town with a ton of haunted history. The Haunted Live Walking Horse Hotel episode — airing tonight at 10 on Travel Channel — explores a building that’s the setting of more ghost stories than possibly any other location we’ve seen so far. Basically, if you liked last week’s Lotz House ghost hunt, make sure you tune in for this one.

Before we get into the hotel’s spooky legacy, though, here’s the video of TWC making their now-regular location reveal. The group announced their latest destination on Facebook Live yesterday afternoon, touching on some of the main points in the Walking Horse Hotel’s history. They also reminded fans and first-time viewers of the many ways to interact with every Haunted Live episode, so, if you haven’t been following the show’s social media pages, you’ll want to find out how to take advantage:

As you can tell from the photo at the top of the article, the hotel is not at all like Haunted Live‘s other settings. Whereas the Lotz House, Cragfont, the Gallatin Palace Theater, and Octagon Hall are all well-preserved landmarks, the Walking Horse Hotel has seen better days.

The building most recently went up for sale in the autumn of 2016, shortly after a fire broke out the second floor and water from a pipe that burst during the firefighting damaged the floors below. Joe Peters, the owner from 2007 to 2016, played down the Walking Horse Hotel haunted talk after putting his business on the market. He acknowledged that some guests had reported eerie sights and sounds, but refused to drop the H-word.

“The hotel is not demonic; there’s is nothing evil there. We will call it more mysterious than haunted,” Peters told WKRN. “[Guests] have…heard hoof sounds of horses on the ground floor, sound of horses heard running across the corridors upstairs. The hotel is a friendly place. That is why the spirits that are there are friendly as well, but they are playful, no question. For lack of a better term, people have been messed with in that hotel for years and years.”

But Peters himself used the Hotel for otherworldly purposes — and on more than one occasion. After he purchased the building, Peters’ wife Chais died of cancer, and he named the Walking Horse’s new music lounge after her. The photo below was taken in November 2017, well before the current renovations were underway: 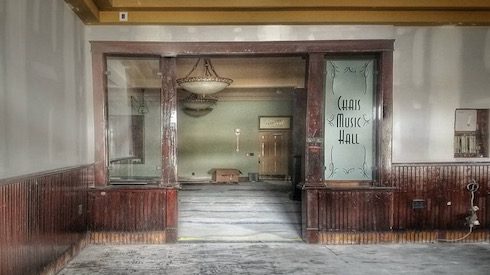 And, in 2010, Peters capitalized on the Hotel’s well-established reputation as a ghost haunt by opening the building up for haunted tours. He told the Shelbyville Times-Gazette that since he’d run out of money during renovations and was unable to complete the third floor on time, he decided to make the most of the situation by turning that floor into a haunted house, complete with scripted vignettes, black lights and strobes, and an “amazing assortment of props.”

The OG ghosts of the Walking Horse Hotel

But the establishment’s best-known spectres are the ones that have been around the longest. The Walking Horse Hotel got its name from the Tennessee Walking Horse industry, to which Wartrace — home of both a well-known walking horse show and the Tennessee Walking Horse National Museum — is a major contributor. Strolling Jim, a walking horse who won the 1939 Grand World Championship and was essentially the Michael Jordan of his day, is buried behind the hotel. And Floyd Carothers, Strolling Jim’s owner, bought the hotel in 1933 with his wife Olive. Indeed, it was Floyd who changed the business’ name from the Hotel Overall to the Walking Horse Hotel.

Per author Robin Mead’s Haunted Hotels, George Wright — the hotel’s owner before Joe Peters — claimed “the entire property was guarded by [Carothers]’ ghost.” Wright explained that the most prominent ghost had to be Floyd’s spirit, because when Olive Carothers passed away years after her husband, the “activities by Floyd’s spirit abruptly ceased.”

The Walking Horse Hotel’s many other ghosts remain more difficult to identify. George Wright’s brother, who was killed overseas while serving in the US Navy during George’s time as owner, has apparently appeared more than once.

George Wright, who was a manager of the hotel from 1980 to 1993, said that in the early 1980s, he had a photograph taken of himself and a guest sitting at the dining-room table. George had intended to use the picture in a brochure for the hotel. He was unable to use the photograph, however, because after it was developed, it clearly showed two shimmering figures standing behind George and his guest.

We should also point out one of the most prominent Walking Horse Hotel haunted rumors, that of a Vietnam War veteran disturbed by PTSD who’s said to have killed several guests one night in the late 1970s. The ghosts of the veteran and his victims supposedly reappear around the anniversary of the killing, which has a different date depending on who’s telling the story. We didn’t do a deep dive into Tennessee newspaper archives, but a cursory search of reports from that era revealed no such incident.

For a better look at what the Haunted Live Walking Horse Hotel episode may have in store, consider this footage of a 2011 investigation, albeit one unrelated to the Tennessee Wraith Chasers:

Also worth checking out is this just-uploaded video of a 2015 ghost hunt, conducted by Parafiles: