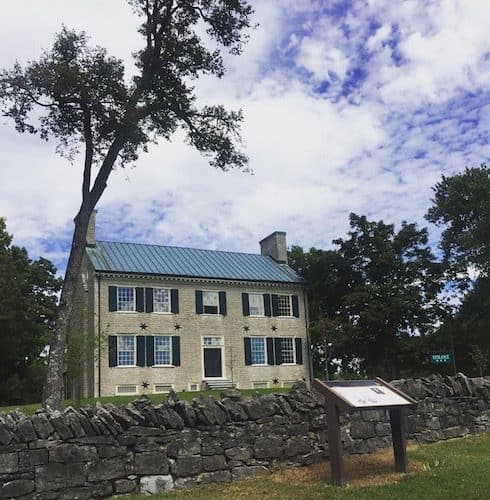 The Tennessee Wraith Chasers just wrapped up a semi-impromptu Facebook Live event by unexpectedly pulling back the curtain on their next top-secret location! Though Haunted Live‘s sites are kept under wraps until the moment each episode airs, the group decided to spill their own tea ahead of time this week, as the location is a special one for them.

TWC is hyping the Haunted Live Cragfont episode something fierce

. Unlike the Gallatin Palace Theater, Cragfont is a place that doesn’t generally allow large-scale paranormal investigations, and it doesn’t often come up on TWC’s itinerary. Below is the full Facebook Live video, in which the guys go into detail as to why Castilian Springs’ Cragfont Mansion is so important to them as paranormal investigators. But the highlight of the clip has nothing to do with being scared — it’s actually a great blooper.

Within the first minute of the stream, the group announces its intention to reveal where they’re going next by the video’s end. (They actually did the stream while sitting around a table inside the location itself.) And then, about a third of the way through, Steven “Doog” McDougal accidentally lets the name of the place slip while getting excited about some of the things he’s seen there.

Here’s the complete TWC Facebook stream, embedded for your perusal. To see Doog’s blooper (and enjoy the ribbing he gets for it), skip ahead to about the 13:20 mark:

Haunted Live Cragfont style promises to be a historical treat

Cragfont House, located just outside Castilian Springs TN, has as long and varied a paranormal history as any place we’re likely to see this season. As TWC pointed out, the house, first occupied by Continental Army officer James Winchester, was finished in 1802 — a time when Tennessee really was the Wild West. Winchester named the house Cragfont because, per its web site, “it stood on a rocky bluff with a spring at its base.”

The Winchesters owned and occupied Cragfont until 1864. James; his wife Susan; and several other family members are buried in a plot behind the house. In addition, Cragfont stood at the center of the Winchesters’ tobacco plantation, for which they owned 100 slaves. Though the slave quarters haven’t survived to the present day, an uncertain number of the slaves themselves died and were buried on the property.

(Also of note: It’s a popular misconception that James Winchester is somehow related to Oliver Winchester, best-known for the Winchester repeating rifle. Oliver was born eight years after James and his family moved into Cragfont; he and his parents were New Englanders. If their family trees do share a branch, it’s somewhere much farther back than the brief period when both Oliver and James were alive.)

Some of the Cragfont ghost stories involve specific people. James Winchester’s spirit is said to roam from room to room at night. James’ wife Susan has also been spotted, as have both anonymous slaves and spectral visions of long-fallen Civil War soldiers, clad in rebel gray as well as Union blue.

Another common feature of Cragfont ghost stories is the sight of unattended candles burning in the windows when no one has been in the house for hours. (The Tennessee Wraith Chasers themselves mention having witnessed this in the Facebook Live video above.) Over time, Cragfont’s caretakers have reported finding unmade beds waiting for them first thing in the morning, along with a bevy of objects moved to different rooms or lifted into impossible places.

One oft-repeated story about Cragfont involves legendary country musician Conway Twitty. I haven’t been able to dig up an interview with Twitty where he discusses the alleged incident or in any other way verify this story — but it’s a good story, and we’re not claiming it actually happened, so it’s definitely worth repeating here 🙂

As the story goes, Conway Twitty, who apparently had a lifelong fascination with ghosts and haunted houses, once paid a visit to Cragfont. But Twitty asked to tour the mansion completely alone, with no caretakers accompanying him. Before too long — accounts vary from twenty or so minutes to a few hours — Twitty surprised the caretakers waiting outside by flinging open the front doors and stalking down the steps like the Ghostbusters fleeing the New York Public Library. When asked what was wrong, Twitty would only say that a host of objects started flying at his head, and wouldn’t stop. A pair of heavy candlesticks was the last straw.

Among other in-depth considertations of Cragfont, the Something’s Not Right hosts paid a visit to the house last year, and devoted an entire episode of their podcast to it. One of the many interesting details they pointed out is that Cragfont’s back staircase is said to be either one of the most haunted spots in the house or *the* most haunted. If you linger there, you’re apparently like to have candlesticks launched at your head — which may lend credence to Conway’s story:

Additionally, and to give you some idea of what the house looks like on the inside, Nashville musician Jasmine Cain filmed the 2014 music video for her song “Nightingale” at Cragfont. The video is a little bit reminiscent of the one Metallica made for “Whiskey in the Jar” (except that Cain’s also features a surprise drowning at the end!):