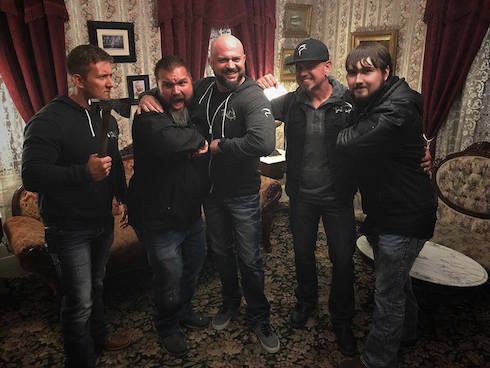 Haunted Live, Travel Channel’s groundbreaking new paranormal investigation show, is building up a ton of buzz ahead of its world premiere. As we wrote in our exclusive preview earlier this week, Haunted Live is amping up the ghost genre of reality TV and reality TV’s general high level of social media engagement by letting the audience watching the action unfold on Facebook Life dictate what the actual investigators do on the television screen.

An essentially improv-based scenario like that could fly off the rails in a hurry — which is why it’s a good thing that Haunted Live will feature the Tennessee Wraith Chasers, a quintet of ghost hunters who’ve also got plenty of experience in front of cameras. Haunted Live looks to be their biggest show yet, so, if you aren’t already familiar with the crew, here’s a rundown of their bios, past experience, social media links, and a few other fun tidbits.

Who are the Tennessee Wraith Chasers?

Christopher Smith — that’s him on the far left in the photo at the top of the article — founded the TWC in the autumn of 2009; he’s the sole remaining member from those days. Several other members have come and gone since then, but the current group has been in place since early 2015. Their first sorties were were into towns and buildings with extensive paranormal histories around the group’s hometown of Gallatin TN — a place that boasts what Steve McDougal, TWC’s second-longest-tenured member, once called “one of the most haunted squares in the United States.”

Nor is the surrounding countryside bereft of spooky sites. For example, the Chasers have conducted numerous investigations into Pittsburg TN’s Old South Pittsburg Hospital, so much so that the group appears almost to consider the building an old friend.

Their televisual careers took off with the 2013 TV movie Ghostland Tennessee, which appears to have been shopped around as a pilot. Destination America took an interest, and Ghost Asylum, the Tennesee Wraith Chasers’ first show, launched the following year. In addition to running for three seasons from 2014 to 2016, Ghost Asylum became somewhat famous (or infamous, depending on your point of view) for the macabre, in-your-face disclaimer that aired before every episode:

WARNING: Our boys are professional ghost hunters who have permission to enter the most haunted buildings in America. Trespassing on private property is dangerous and illegal. Chasing ghosts without proper training will get you killed.

Here’s a demon-centered clip from Ghost Asylum, to give you an idea of what TWC is all about:

Ghost Asylum helped secure the Tennessee Wraith Chasers’ spot in the upper echelon of America’s ghost hunters. The crew also became widely known for inviting fans to participate in hunts and help document their findings; spectacles like last year’s nighttime study of the Rose Mont plantation house outside of Gallatin saw the group buddy up with 28 paying fans. The goal? As newest TWC member Mike Goncalves told The Tennessean, “We just hope…everybody shows up, they have a good time, and…we find some really good evidence.”

Since that search was just one of many that’s been well-documented by both the TWC and their fans, there’s plenty of video of the event for folks to study. Like this clip:

Since then, you may have also seen TWC on both Destination America and Travel Channel, where their latest show Haunted Towns ran last year. But the push behind Haunted Live (part of Travel Channel’s overall “Ghostober” theme for autumn 2018) looks to give the TWC its most-ever exposure.

And who are the Tennessee Wraith Chasers individually? Are they the entire Haunted Live cast?

TWC’s five members are indeed the entirety of Haunted Live‘s cast. From left to right in the photo at the top of the article, they are Chris Smith, Steve McDougal, Scott Porter, Mike Goncalves, and Brannon Smith (who is also Chris’ younger brother). We’ll go through their bios and social media links in alphabetical order. 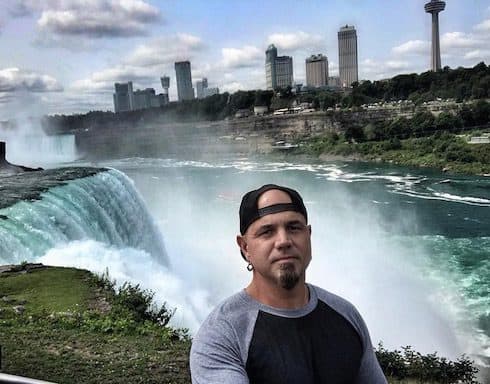 Mike Goncalves, the Tennessee Wraith Chasers’ tech guru, reached out to the group during the first season of Ghost Asylum and offered his experience with advanced audio and video equipment to “help uncover evidence that the typical paranormal investivator was missing.” The collaboration led the Chasers to offer Mike a spot with them when former member Chasey Ray McKnight resigned his position in order to spend more time with his family.

Though a self-proclaimed skeptic at first, the paranormal anomalies Mike experience on his own well before hooking up with TWC have given him a healthy appreciation for what the group does. 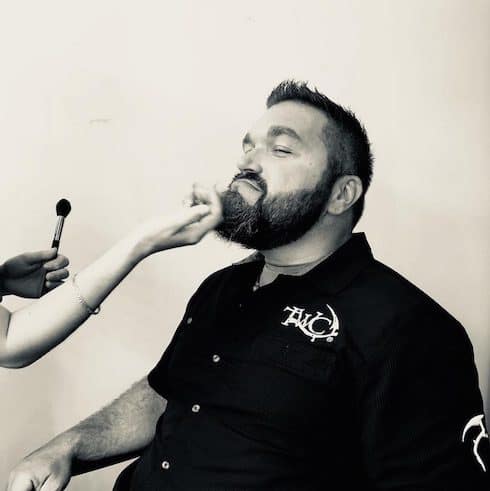 Steve “Doogie” McDougal, a full-time X-ray technician, joined the Tennessee Wraith Chasers back in 2010, and is currently listed as co-founder. The 38-year-old claims his very own home is haunted, something that led him to study ghosts and ghostly history more closely. According to his official TWC bio, Doogie’s “number one desire is to find hard evidence and reveal the truth behind the unexplained.”

To that end, Steve has on more than one occasion offered tips for the general public interested in hunting the paranormal. Per The Tennessean, Steve’s advice is as follows:

Never go in anywhere you don’t have permission.
Keep things clean.
Respect wherever you’re at.
Be prayed up. Keep the Big Man on your side before you go in because you don’t know exactly who you’re talking to or what you’re talking to on the other side.
If it’s something that scares the bejesus out of you, you probably don’t need to be doing it. 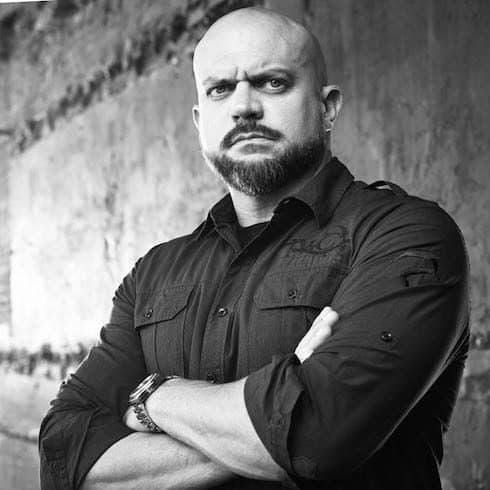 Scott Porter, 43, is the Tennessee Wraith Chasers’ official historian. He grew up in a strict Baptist household in Gallatin TN, and it was a paranormal event involving his mother and father that led him to a serious study of the concept. From Scott’s bio:

Scott experienced an unexplainable event that occurred one morning as Scott awoke to the smell of breakfast filling his boyhood home. As Scott walked down the hall he noticed his mother wearing an unfamiliar pink robe while preparing breakfast at the stove. After a quick splash of water on his face in the hallway bathroom he started to the kitchen and quickly noticed that the smell of breakfast had vanished from the air and his mother was nowhere to be found. Once he thoroughly searched the house he picked up the phone and called his dad only to discover that both his mother and father had left the house much earlier that morning without ever having prepared breakfast. 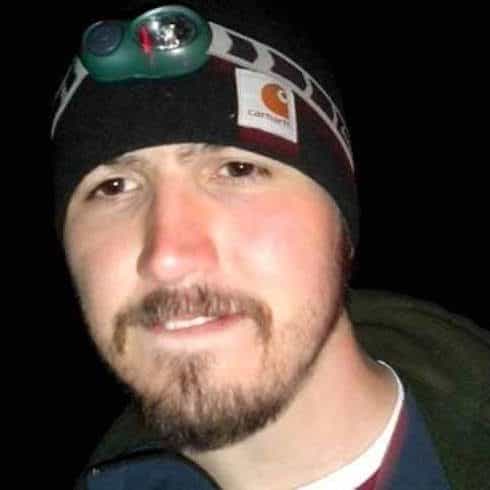 Brannon Smith, an “extremely analytical thinker,” is the Chasers’ engineer. His immediate plans are to earn two graduate degrees: an MS in electrical engineering, and a Ph.D in theoretical physics. Until then, he considers it his mission in TWC to “explain hauntings as scientific phenomena that can be explained by theoretical physics.”

Perhaps most intriguingly, Brannon says his “greatest fear is being afraid — or fear itself.” Not a bad trait to have when you’re about to feature on a ghost hunting show. 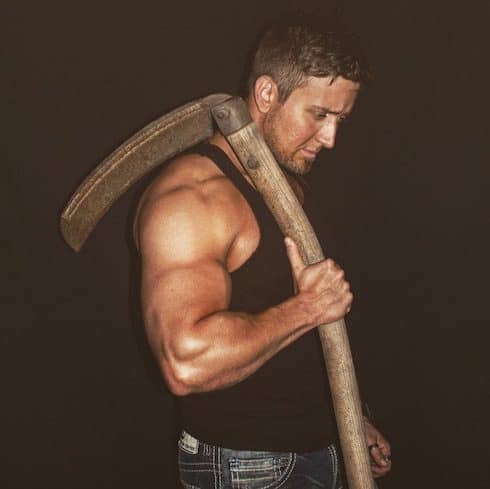 Chris Smith is Brannon’s older brother and the founder of the Tennessee Wraith Chasers. Though Chris, like the rest of the Chasers, is “deeply rooted in his Christian faith,” he also has a long fascination with the paranormal and especially with Shadow People: “humanoid figures” generally believed to be seen in peripheral vision. Chris’ fascination stems from “a frightening paranormal experience in his grandfather’s barn,” one that took place when Chris was 20 years old.

That experience led Chris deeper into an exploration of unusual phenomena — and to his first foray into TV. In 2009, Chris featured on the first season of SyFy’s Ghost Hunters Academy. Here’s a clip from one of the two episodes in which Chris appeared:

After all that, though, don’t forget to tune in: Haunted Live premieres Friday, September 14th at 10 PM on Travel Channel.