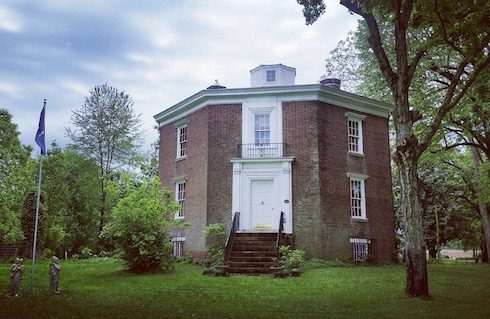 The Haunted Live Octagon Hall episode highlighted one of the most curious and oft-investigated paranormal sites in the state of Kentucky, if not the entire south. Octagon Hall’s extensive history (and its notorious death list) were too much for a single hour of already ghost hunt-packed television to cover, so we thought we’d hit a few of the highlights for your paranormal pleasure.

The original plans for what would become Octagon Hall were laid out in 1847 by Andrew Jackson Caldwell. Andrew completed the edifice in 1859, and he and his family — Andrew’s second wife Harriet (Elizabeth, Andrew’s first wife, died in 1851), and their eight children: Edith; Henry; Martha; Andrew; Joseph and John (who were twins); Virginia; and Ernest — moved in with their slaves shortly thereafter. (Mary Elizabeth, Andrew’s daughter with Elizabeth, also moved in with them; more on her in a bit.)

Octagon Hall’s unusual shape and prime location (on the main road north from Nashville) meant that it quickly became a regional attraction. But Octagon Hall soon gained a measure of infamy nationwide when it became the site of a Civil War skirmish. Per the Bowling Green Amplifier, Andrew, whose brother was a Confederate colonel, made it known “that any Confederate soldier who could make it to the Caldwell’s family farm would receive shelter and medical care.”

So when, in February of 1862, the 12,000-strong “Orphan Brigade” of regiments from around Kentucky found themselves being pursued by Union forces, they took Andrew up on his offer:

That incident was more or less the high water mark for the Caldwell family. Octagon Hall’s official site describes the changing ownership after the Civil War: Andrew died in 1866, and Harriet lived in Octagon Hall until 1918. She sold the property to Dr. Miles Williams, an osteopath from Nashville, who lived there until he died in 1954. Dr. Williams’ wife made Octagon Hall her home until her death in 1981. For the next twenty years, the house was a rental property. And in 2001, Billy D. Byrd founded The Octagon Hall Foundation, “dedicated to the restoration and preservation of the only eight-sided house in Kentucky.”

Who all died at Octagon Hall?

Incomplete records and the large number of people who’ve called Octagon Hall home, even temporarily, make it difficult to compile an authoritative death list. Based on everything we’ve been able to find, it looks like the number is at least eight people. The biggest question mark is the number of slaves who died there.

In addition, the Caldwell family plot on the Octagon Hall property contains several more graves. Elizabeth Akers Caldwell, Andrew’s first wife, is buried in the plot, though she apparently died eight years before the house itself was finished. Also buried there are Elizabeth and Andrew’s baby AJ, who also died several years before the Caldwells technically moved in. So, if the Caldwell family was living on the farm where Octagon Hall would later be completed, I guess their deaths have to count in the overall tally.

Aside from the Caldwells, two Confederate soldiers are buried at Octagon Hall. And an entirely separate slave cemetery contains the bodies of an unknown number of the Caldwell family chattel.

Octagon Hall ghost hunts have become an industry unto themselves

The number of unexplained events that have taken place and been documented at Octagon Hall over the years make it fertile ground for ghost hunters. According to Billy Byrd, the Hall receives approximately 6,000 visitors per year, many of them hoping to catch a glimpse of the unknown. And the Amplifier article notes that, as of its publication, “sixty-two paranormal groups have researched the property and come away with a wide variety of experiences and evidence including ghostly photos of an adult male in the window, ghostly children playing in the driveway[,] and apparitions in the basement.”

Mary Elizabeth Caldwell, whose fiery, tragic death rests at the heart of the property’s lore, is said to still haunt the kitchen. Every year, on the anniversary of Andrew Caldwell’s death, the front parlor where his body was displayed before being laid to rest allegedly smells strongly of the flowers placed around the corpse — until that smell is replaced by one of decaying flesh.

A WKRN article on Octagon Hall ghost hunts detailed some of the other spectres and phenomena. The ghost of Jerome Clark, a Confederate spy who dressed as a woman to carry out his duties, is believed to haunt the house. Another ghost, who hunters call simply “Eddie,” never appears, but always makes a consistent shuffling sound up in the attic: “It’s like he’s dragging his leg.”

Even Billy Byrd, who was initially skeptical of the Octagon Hall ghost hunts and everything they implied, says Mary Elizabeth once appeared before him in the basement.

I assumed that some of the tourists had stopped and the little girl had come in and I said, ‘Hun, can I help you?’ And the best way I can describe it is that she turned away from [me] and basically encapsulated herself and then just poofed into black dust. I’m sure it took me 10 minutes to get my jaw off the floor.

With instances like these, it’s probably better to show rather than tell. Here’s a 31-minute clip filmed at Octagon Hall by the Ghost Hunting Weekends crew — see if you can count the unusual occurrences:

There are plenty more related videos available on YouTube and elsewhere, so you can dive in yourself if you feel the need. For now, we’ll close with one more brief clip, in which the wheelchair moves…on its own:

The truth about Valentine’s Day: A dark, brutal history