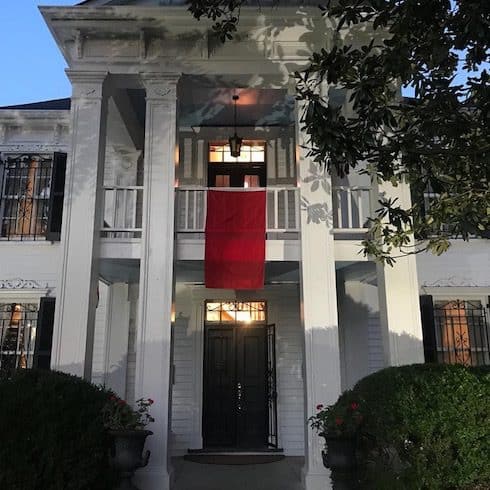 The Tennessee Wraith Chasers again took to Facebook Live to reveal the location of their next investigation a day early — and it’s a doozy. Last week, TWC broadcast from Tennessee’s notorious Cragfont House for the first time in the mansion’s history; this week, the Haunted Live Lotz House episode will delve deep into the landmark’s horrific past. That past, all 170 years of it, is centered around the Civil War bloodbath responsible for so many of Lotz House’s alleged hauntings today.

Johann Albert Lotz, the Lotz House’s namesake, was a carpenter and piano maker who emigrated to the United States from Germany. He bought the five acres on which the house originally stood in 1855, and finished construction of his home in 1858.

According to its official web site, the Lotz House is a testament to Johann’s skill as a craftsman. It features three handmade fireplace mantel, each in a different wood, and a bevy of “hand-carved acorn finials, millwork, and cartouches” on the exterior. Most impressive of all is the “free-floating, black walnut wrap-around hand rail and cantilevered staircase.” No wonder, then, that the house has been on the National Register of Historic Places since 1976 at least in part for its detailed woodwork.

(One quick aside before we get to the gore: As anyone who’s worked with wood or even just firewood can attest, black walnut is one of the most sought-after hardwoods, but its beauty belies its stubborn nature. Black walnut can be a *real* beast to wrangle into complex shapes like a wrap-around hand rail.)

Unfortunately, carpentry is not why there’s going to be a Haunted Live Lotz House episode. On November 29, 1864, around 25,000 Union soldiers were retreating from Spring Hill to Franklin Tennessee, where they stopped in anticipation of a Confederate attack and dug protective trenches in what amounted to Johann Lotz’s front yard. Upon seeing this, Johann, his wife Margaretha, and his children Paul, Augustus, and Matilda wisely bolted across the street to the Carter House to wait out the battle.

The families didn’t have to wait long. By December 1st, the fighting was done — but the horror was just beginning:

When they exited the basement the next morning, they were horrified to see the bodies of dead soldiers six feet deep between The Carter House and their home across the street. Indeed, historians describe the fighting that took place at the Battle of Franklin and in the Lotz front yard [as] “some of the most severe hand to hand fighting during the four-year-long war.”…Ten thousand Americans had been killed, wounded or missing. The Lotz House served as a hospital for the wounded soldiers on both sides until the following summer.

To this day, one can step into the Lotz House and see numerous blood stains in all of the rooms….During the battle a solid shot cannon ball crashed through the roof, smashing into the floor of an upstairs bedroom and down to the first floor. The large repaired patch made by Mr. Lotz remains in the second floor. And on the first floor, where the cannon ball finally came to rest, one can clearly see where the hot lead ball first hit: burning the floor, then rolling.

Here’s a modern-day look inside the Lotz House and around its grounds, from a visit Nashville’s NewsChannel 5 made back in 2014:

Since the Civil War, family members and visitors have reported countless ghost sightings. Unsurprisingly, a great many of the spectres are said to be clad in Union or Confederate uniforms, their presence often attributed to the Lotz House’s function as a hospital as much as to the thousands on the family’s land.

But the soldiers are not the only ones who’ve passed away in and around the building. As Margie Thessin of Franklin on Foot Walking Tours explained to WKRN, the Lotz family itself experienced personal tragedy in their home.

“They had two children who died at the age of two,” Thessin said. “We think that some of those ghosts had to do with the children.” Thessin also attributes the children’s ghosts to some of the merrier, more prankish ghost sightings: “People have had their pants legs on, things like that.”

Other sightings aren’t so easily explained. Thessin told the news station about one of the “scariest happenings” to occur regularly at the Lotz House:

Something drew [a visitor’s] attention to the stairs. So she sort of twisted around and she looked into the hallway and up the stairs and there was a woman standing on the stairs. This woman is holding a candle, she’s calling out for someone, saying, ‘Where is Ann?’ Ann was the middle name of Mrs. Lotz, so that may be what they were referring to.

J.T. Thompson, his mother Sue, and his wife Susan Andrews purchased the Lotz House in 2002 in order to reopen it as a museum. All three family members have since witnessed the Candle-Ann ghost, which Susan called “just creepy.”

She added, “I think there’s something to restless souls.”

If you’re in the area and you want to check out the house for yourself, you have two options: you can visit it in museum form, or have a look on one of Franklin TN’s aforementioned, officially designated walking tours.

And of course, before that can happen, you’ll want to have an even better idea of what’s in store by watching the Haunted Live Lotz House episode, airing Friday, October 5th at 10 PM on Travel Channel.

Are the Shahs of Sunset Muslim or Jewish?