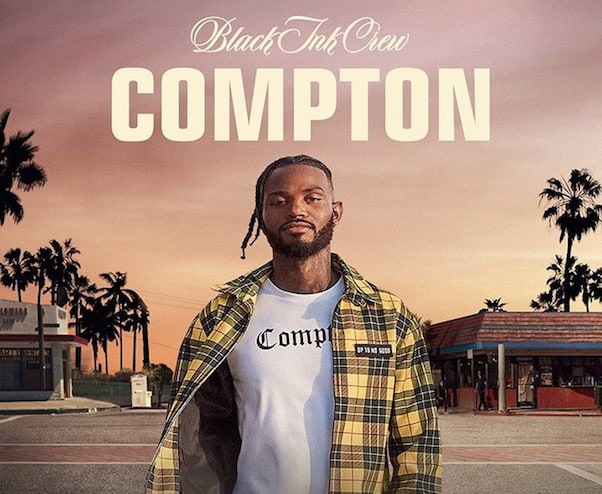 Though we only ever hear a small sample of the whole track on the show itself, the Black Ink Compton theme song has gotten a ton of attention since the VH1 hit’s debut. Part of that is due to how little of “I Do What I Want” we actually hear; part is also because it’s Black Ink Compton star Danny Kilpatrick’s song. And, to hear Danny — alias IAm Compton — tell it, his early rhymes actually helped lead him to a career as a tattoo artist.

But first up is the Black Ink Compton theme song itself. The “I do what I want” snippet we hear at the top of every episode of Black Ink Compton is the song’s title, hook, and driving force. IAm Compton’s 2016 mission statement track also features Rich Homie Quan; the two have toured together and guested on each others’ work a number of times.

Shortly after Black Ink Compton‘s series premiere, IAm Compton went on Power 106 to talk with Nick Cannon about his career and the pieces that came together to make the show happen. According to the man himself, he actually started off as a writer, lyricist, and rapper — and still considers himself one — but had to find a quicker way to make money than just hoping for a breakthrough.

Here’s what IAm Compton had to say about his early days as a rapper:

I started doing music, I want to say in ’05. I always been a writer, you know what I’m sayin’, like on some poet shit. Once I tapped into that, I was heavy into writing songs; it was like my therapy. So after I had homies on the block that was rapping, I was like, “This what I do.” But from there it was like, I’m takin’ it serious, I’m doin’ this; my P.O.’s like “Nah. Until you show proof of income, you can’t do no music, rap or nothin.” That’s when I was like, “Oh, it’s a business.” You know what I’m sayin’? “They clockin’ me. I’m on papers.” After that, I had to pick up a tattoo gun, instead of a real one.

Of course, as viewers of the show know, IAm’s relationship with art and images goes back to his earliest days. He expounded upon this part of his backstory while talking with AllHipHop, during the promotional tour for Black Ink Compton earlier this year.

AllHipHop: Bring us back to when you both first fell in love with tattooing.

KP: It was a decade ago, once I realized my story and my life was already written. I’ve been drawing since 1st grade/elementary. I didn’t realize the gift I was given and how much of a blessing it was to be able to draw. I had no options, I had to figure out what to do with my life or go to jail. I picked up the tattoo gun, a real one. It’s like hold up, I had this talent all along and never even used it. I’m over here looking at everybody else like “I want to do that, I want to do that,” and this whole time I already was blessed with a purpose.

If you’re interested in booking a session with IAm Compton or just at the InkArtMusic tattoo shop, you can visit the shop’s official site. Black Ink Crew: Compton airs Wednesday nights at 10 on VH1.