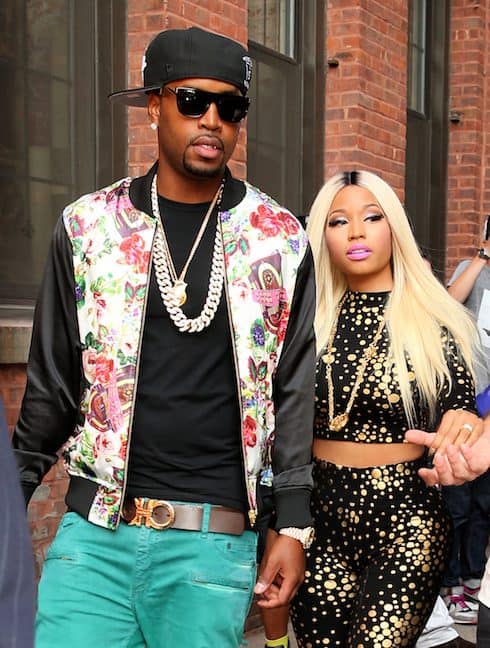 Love & Hip Hop New York star Safaree Samuels broke up with longtime girlfriend Nicki Minaj a little over three years ago. But, thanks in part to Nicki’s reluctance to talk about it, the exact reason for Safaree and Nicki’s split has always been something of a mystery.

However, the recent leak of Safaree’s impressive nudes has him in high demand, and he’s getting asked plenty of questions about he and Nicki’s time together. (And in case you were wondering: Yes, that really is Safaree in the clip.)

Now, in a brand new interview with DJ Envy and his wife Gia’s Casey Crew podcast, Safaree suggested that it was Nicki’s emotionally abusive ways, coupled with her rising fame, that forced the two of them apart.

We’ve embedded the entire interview below, but a few highlights — originally transcribed by VH1 — point to an increasingly troubled relationship for Safaree and Nicki. For example, at one point Safaree talks about how he felt Nicki was “train[ing]” him to become someone different:

I ended up being trained to be that kind of person. Like, in the beginning, its like aight, ‘Lil Wayne wanna holla at you? Imma shut my mouth and let’s see where this is gonna go. I can’t give you what he can give you so I’m gonna support.’ I was just doing that for so long it was programmed in my head.

Elsewhere, DJ Envy — who goes way back with Safaree — referred specifically to the emotional abuse Safaree went through, saying “I don’t wanna say you were battered, but you were an abused boyfriend.” When Gia thought her husband was joking, Envy explained that “sometimes Safaree couldn’t leave the crib” and that Safaree was “sheltered.”

Safaree agreed with that, adding “Nah that’s true, but it’s because [Nicki] was sheltered. She’s in her cocoon and I’m there with her. I didn’t really have a life outside of that. 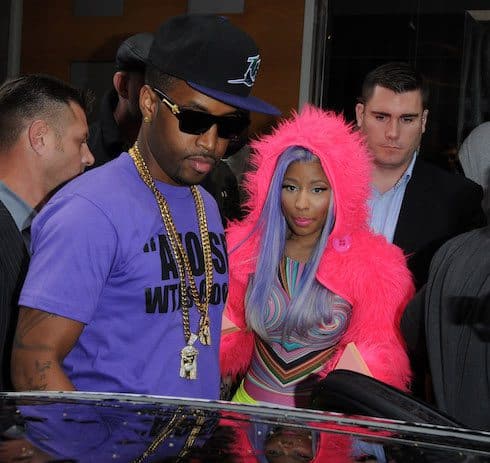 Safaree and Nicki together in 2012

Finally, Safaree described his own breaking point. He said that he was “comfortable” in the relationship despite the growing drama that came with it, but that even a non-confrontational person like himself had a limit:

I was really comfortable, but then the fights and stuff it was getting too crazy. I was like, ’You know what? I don’t wanna go to jail. I don’t wanna go to the hospital.’ I walked away, I’m not a confrontational person and I don’t like to argue. We’re not gonna be doing this all day every day, I’m not gonna have hands put on me and the verbal—it takes a while to get over that. It took me a while to have my confidence that’s why I was going to the gym so hard…It took me a good 4 and 1/2 years to be like, ‘Okay, now I’m me and I’m walking in my own.’

The last time Safaree tried to address his abuse claims with Nicki, she blew it up into a very public argument. In 2016, Safaree served Nicki with a lawsuit claiming she had abused him “emotionally and physically” during the decade-plus that the two of them were together — and Nicki promptly took to Twitter to slam Safaree.

Plus, there’s apparently one more angle to consider, now that video of Safaree’s huge penis has leaked all over the internet the the world to see. TMZ is now claiming that he says it’s actually his dong that kept Safaree and Nicki together for so long.

We say “claiming” since TMZ’s article doesn’t use any quotation marks when quoting Safaree. Though their interpretation is unmistakable: Safaree “flat-out admits” that “Nicki used to always say to him — if he wasn’t so blessed downstairs, she would have left him.”

Though, based on Safaree’s version of the story from the Breakfast Club interview, it sounds like he’s actually the one who left? But then it’s also possible that Nicki was treating him more like an escort than anything else.

In any event, the Love & Hip Hop New York reunion special airs tomorrow, so we’re likely to get freshly unearthed dirt on the Safaree and Nicki breakup for a few more days at least.

LHHNY Did Cyn and Joe call off their engagement?