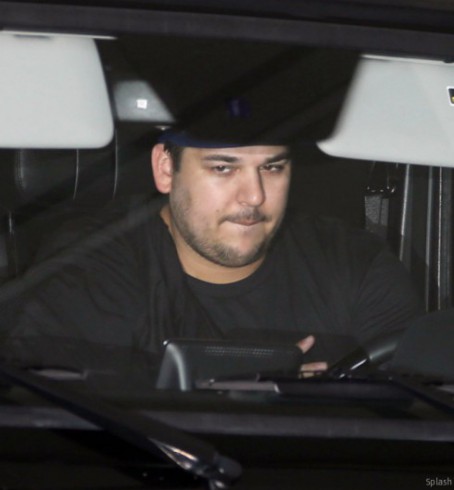 Although he didn’t appear in the episode at all, last night’s Keeping Up With the Kardashians was all about Rob. His weight gain and depression have been mounting issues on the show, and his family rallied to stage some sort of intervention.

Mom Kris said that he’s gained 100 pounds in the past year, and feared that he maybe endangering his health. That’s about as specific as the show gets, but they seem to be skirting around potential other issues. When the family arranged for interventionists to arrive at Khloe’s house where he lives, (after reported numerous attempted to get him into other rehab programs,) Rob locked himself in his room and refused to see them.

When he spoke to Khloe on the phone, she broke down in tears. “It’s not fair for you guys to do this to me all the time. It’s not fair. Just accept the f—ing help,” she pleaded with him.

Closer magazine claims that Rob is working on a book about his famous family. “Rob was approached to do a tell-all book and he’s recently signed a deal,” a source told the mag. “He plans to claim that Kim sometimes uses her daughter North to promote Kanye West’s tour and that her marriage is partly based on money and publicity.

“He wants to show how fame has changed and tainted the family over the years. They were a traditional church-going family who were very close and put each other’s welfare first, but now he says they often row and everyone’s falling apart in their own way.”

Who won Dancing With the Stars? Rob Kardashian, or J. R. Martinez?