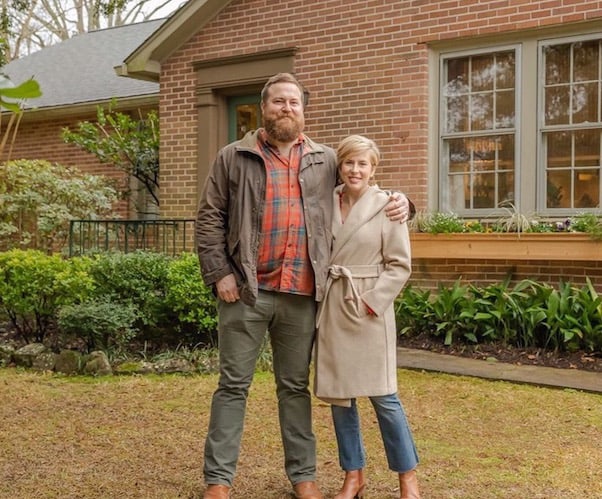 We’ve got a double dose of good news regarding Ben and Erin Napier, the stars of HGTV flagship remodel show Home Town. Not only are Erin and Ben Napier having another baby (!), they managed to keep Erin’s pregnancy a secret for eight full months while filming two separate shows!

Helen, the couple’s first child, was born in January of 2018. And Erin’s first pregnancy was something of a surprise for Erin and Ben, who had long wanted children but had had difficulty conceiving.

Plus, as Home Town fans will recall, Erin’s first pregnancy was a bit of a surprise, too. As we’ve written about before, Erin Napier just doesn’t have much of a baby bump.

In fact, while she was pregnant with Helen, Erin addressed her physical appearance and the expectation some people have regarding baby bumps.

And just as we were writing this article, Erin shared another non-baby bump update, again acknowledging that it’s unusual for her to “show” so little, so far into her pregnancy:

Still, we’re in awe of Erin, Ben, and the whole Home Town crew’s ability to keep a secret. Next month, we get the first of six Home Town spinoff episodes, filmed during the Napiers’ time in Wetumpka, Alabama for the long-awaited Home Town Takeover.

Essentially, what this means is Erin kept her pregnancy a secret whole maintaining a double-duty workload for the past eight months. Plus, let’s not forget that it was this time last year Erin revealed she’d had a potential COVID-19 scare very early on in 2020.

Although Erin and Ben revealed her second pregnancy during last night’s new episode of Home Town, it was the social media reveal that really pulled at fans’ heartstrings.

Here’s Erin’s reveal post, full of clips of Helen’s introduction to the world. Below that, we’ve copied her original caption in full:

By now most of you know that in just a few weeks we will be adding another little face to our home videos and photo albums. Just like Helen did, her little sister has made it easy to keep her secret by being tiny even now, and I’m deeply thankful that we’ve had almost 8 months of keeping this our news just for our family and close friends. Last spring, I put away the changing table supplies because I no longer had an infant. I put it away in the guest room closet and then I cried because I thought how lonesome Helen must feel up there in her crib beside an empty room every night. A few weeks later, I watched my daddy and his brother standing at my grandmother’s graveside. Two men with many differences strengthened each other. Two men who knew her better than any of us ever could.

Siblings do that, they know and remember and keep the stories of a family alive. And we wanted that for Helen. Someone to stand with her when we can’t someday. And now she’ll have a cousin following just a few weeks behind her, too. We are so thankful. Even in our celebrating, I’m thinking of the would-be parents waiting for their own babies. For many it can be such a long and difficult journey and I pray for strength for you if that’s where you are. God answers in His own time, not ours, awfully hard as that can be. Sending so much love to y’all today. 💓

Ben’s reveal announcement used the same footage as Erin’s. And he wrote further about how overjoyed he is to be adding to his and Erin’s family by one:

I grew up with built-in best friends. My 3 brothers and I speak our own language and know the dance when it’s time to move a piano into a house together. Helen will have that with her little sister. It makes me even happier to know that there’ll be another Napier baby right around the corner from us. There was a time when @erinapier and I didn’t know if we would have kids. I would’ve been happy with just the 2 of us, or just the 3 of us, but I can’t wait to see the 4 of us.

Congratulations to Erin, Ben, and Helen on the newest member of their family!