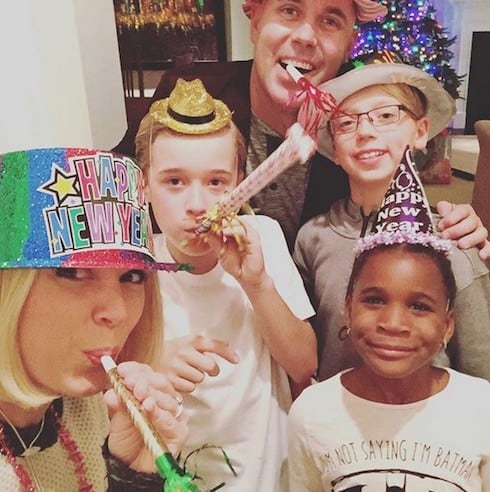 Masters of Flip‘s Kortney Wilson recently took to social media with an extended love letter to her partner in crime Dave, along with the rest of their family and everyone else who made 2016 such a beautiful one for the Wilson crew. As Kortney pointed out, it’s her annual tradition to recap the year that just ended on New Year’s Day, something that seems like a very healthy and worthwhile tradition–assuming you’ve got the time and energy for it 😉 And, as her post reveals, Kourtney has no shortage of either: the HGTV star delves way into her childrens’ lives and the state of her love for husband and co-star Dave.

It’s an unusually earnest and thoughtful message, especially from such a public figure; it’s also unusual in that it benefits from being as long as it is. Which is why we’ve reprinted it in full below, along with the photo that accompanied the original post. If you’d like to read Kortney’s 2017 Happy New Year letter in its original form, you can do so on Facebook here. (We had to cut and paste it, instead of simply embedding the post, because Facebook embeds don’t show a full post when its this long 🙂 ) 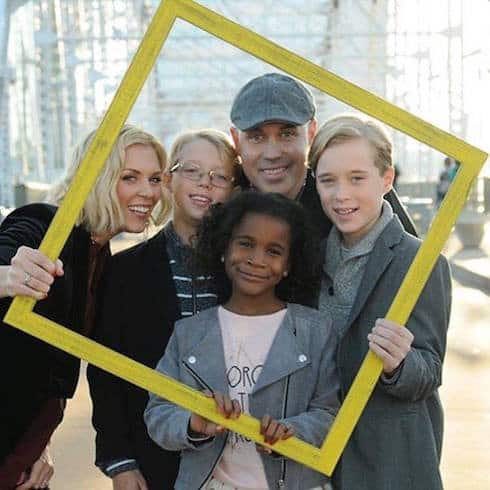 Dear friends. It’s my tradition, to recap the year on New Year’s Day. Every year, I read the updates from years past and smile to myself. So much changes, and yet, so much stays the same but every year brings growth, heartache, laughter and new goals. Here goes something. . .

Jett turned 21. I mean, 12. It can’t be possible that his pre-teen years are nearly behind him but alas, he used this year to make the most of his ability to debate EVERY SINGLE THING. He made stronger relationships with some of his friends and learned to support them from behind the scenes. He smashed his first year of homeschooling (that’s his new word and it’s apparently a good thing) and despite the challenges of taking on his first history AP course, he still thinks school is cool. He got an instagram account and surprised us with his clever posts, decided that facebook was for old people and is quickly becoming 21 Pilots #1 fan having been to 2 of their concerts in 2 different countries. His smile is gold, his slap shot amazing, his attitude fierce (and I mean fierce) and his heart is always in the right place (unless you mess with his secret stash of candy). Just a few of his goals for 2017 include, trying to get back into piano all by himself, start another small business, and to not talk back to his awesome parents and make things worse. Not too shabby my sweet boy, I hope you never stop coming in every morning for a hug. It’s one of the things I live for so add that one to the list too. Love ya kid.

Sully Bully. 10 is working for him. He could possibly be turning into the most loyal and compassionate human being on the planet. He is also one of the most forgetful, but that didn’t stop him from remembering the really important things. Like, when things are a little tense, tell a really long story until we forget where we are, lighten the mood with your contagious laugh and hit us hard with one of your slapstick funny “mama” jokes. 2016 marks the year that he picked up a book to read FOR FUN, got glasses (sorry we didn’t catch that earlier little man), lost glasses, got an entire grade level ahead in math and decided that one pair of socks could be worn for an entire week before mom noticed. He also started a lemonade stand with his buddy Patrick, made enough money from their “Sign” business that I got used to borrowing cash from him. He also selflessly included every friend on the block that was in presence when dividing up the money earned from raking leaves. His hair was always messy, his shirt was rarely clean, his smile was ever sincere and his compliments were perpetually handy. Just a few of his goals for 2017 include, learning how to juggle a soccer ball, finishing the 2nd Chinese book and witnessing a big fireworks display. Completely attainable Bully Boo. You can do it!

Lennox, 7 has seen tremendous growth in the last 12 months. I’m in denial that she’s not a baby anymore but it’s matched with my pride for how hard she worked this year. She learned how to swim (again), do her hair on her own (no easy task, I can tell you that), mastered systems to help her in school, and most impressively, she learned how to affect people with her mad writing skills. The letters were plentiful and the compliments became more detailed. Her style was unique and on point, her smile infectious, her shoe size creeping up on mine, and her awareness of how her behavior and her words affect others became more apparent than ever. She decided that our bed was her bed and that telling me she will give me a massage at bedtime guaranteed her an extra 30 minutes before lights out. Did I say that her timing was impeccable? Her goals for 2017 include playing more knee hockey with Jett, reading more books, group painting with her family and making more lists (she’s definitely her mother’s daughter:).

As for Dave and I, we started the year off with the loss of one of our best friends, Paul. He was a light in each of our lives and losing him knocked us off our feet for a while. During the few weeks by his side, we strengthened our relationship with new friends and members of our community, we learned that through great sorrow and pain, comes great strength. We learned that life must go on after tragedy strikes, that love is a verb and hope is necessary when considering a bright future.

Travel was the path to relaxation. A Disney cruise, trips to NYC, Toronto, New Jersey, Indiana, New Orleans, Tulum, Cancun and Asheville, N.C were just a few stops along the way. My mother’s day present was an 8 year old pug named Turd McCurd. His name quickly changed to Donnie Wahlberg (named after the badass in New Kids on the Block). Chubbs (our other dog) is still kicking and the two are now buddies. We flipped 14 more houses, completed our 2nd season of Masters of Flip, filmed a Christmas special, a Look-Back special, made an appearance on the TODAY SHOW (pretty fun highlight), went to our first UT football game, went to our first Bar Mitzvah (wow, what a party), had a pretty interesting meeting with Buddy, the Cake Boss and stayed in some pretty fancy hotels. We danced, we drank, we laughed, we cried and we connected on a deeper level as a couple realizing that we don’t always have to agree, but we have to stay in the same lane. We felt the support of strangers who unknowingly gave us strength to get through some of the harder days and we never gave up when things got tough. That’s something.

We read your emails, messages and your posts and continue to feel grateful that we can connect with so many people through our work.
BE KIND AND HAVE COURAGE (taken from the words of Cinderella) will be our family motto for 2017. We hope to take that with us on our journey as we learn to be more patient and forgiving. Cheers to all of our friends, family, co-workers, employees, neighbors and fans. We wish you the best and hope to connect with more of you in 2017 because, well, isn’t that what it’s all about?

In honor of Kortney’s message, here are a few of the more endearing photos she and Dave shared in 2016. (Yes, it is nearly impossible to choose, as fans who follow them on social media can attest!)

Merry Christmas Eve from my family. Apparently, we were feeling too cool to look directly at the camera. #familyphoto #christmassweaters @davewilsonofficial

This is my favorite band!

And, speaking of connecting with fans, Kortney and Dave have a new joint Instagram page, which you can follow here.

Many congrats to the Masters of Flip on the year that was! Here’s hoping that 2017 brings even more to celebrate 🙂

Masters of Flip Season 2 will air later this year on HGTV.

RELATED ARTICLE: Masters of Flip showcases the many talents (and crazy bio) of Kortney and Dave Wilson

(Photo credits: Are Masters of Flip married via Instagram)

Student raises thousands for homeless man who offered his last $5