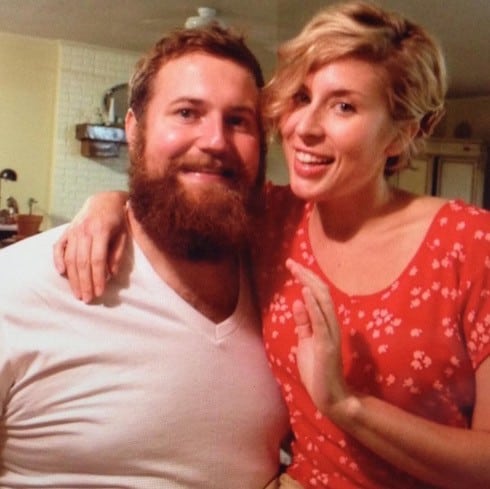 In case you guys hadn’t heard, Home Town star Erin Napier is pregnant. Erin and her husband Ben are great people, so this is really great news! And the Napiers aren’t hiding their first pregnancy for Home Town Season 2 — which premieres on January 8th, 2018 — meaning we’ll all get to follow along during the journey. This is very generous of the Napiers, and also really great news for their many, many fans.

However, Erin recently shared a pair of photos from the first day of her third trimester, and those many fans were shocked to see that, well, Erin doesn’t really look different. At all. It’s actually pretty shocking. True, some women never have prominent baby bumps. But these Erin Napier pregnancy photos reveal basically no bump at all:

It's the first day of my 3rd trimester, 7 months exactly. I'm up 20 pounds but beginning to suspect it's just Pop Tarts in there.

In her most recent Laurel Mercantile journal entry, Erin searched for an explanation one more time, and was again mystified over baby Helen’s seeming refusal to show.

“I remembered today is the first day of my 3rd trimester,” Erin wrote. (A quick note: the day in question was Saturday, October 28.) “I am exactly 7 months pregnant and took a photo to remember it. I don’t know why Helen isn’t really showing still. I’ve gained 20 lbs. and feel great, so I’m grateful, but expecting my big belly to appear any day now.”

Plus, the day before, Erin wrote about a day spent with a “team of…photo and editorial professionals from HGTV Magazine,” who “somehow managed to make [her] feel good about [her]self” despite the aforementioned 20 pound weight gain.

But even that weight gain is completely invisible to even the trained social media observer! Basically, what we’re saying is that Erin Napier looks impossibly unchanged for a woman who’s seven months pregnant, and if she’s worried about anything at all to do with her appearance, she definitely should not be 🙂

For comparison’s sake, here’s a mini-gallery of Erin Napier pregnancy photos, courtesy of the wonders of social media. Based on the third trimester declaration above, it would seem that Erin’s due date is some time in mid- to late January. This photo, then, was taken when she was approximately five months pregnant:

Commemorating the first sweat free day on the set of #HGTVHomeTown season 2. ???

And this one at roughly four months:

The @laurelmercantile framily / owners minus Emily, but still worth sharing since these days it's hard to get our stars to align and bring us to the same place at the same time. I love these goobers. #HGTVHomeTown

This one at about three months…

…and this one after about two months:

?? @anniebjones05 and I have been Instagram kindred spirits for years now sharing our love for small town life, good books, owning our little stores, and wanting to be Kathleen Kelly when we grow up and I'm so glad @lulubeggs ?? invited us to Thomasville to visit today. Such a charming town, especially Annie's bookstore @bookshelftville. So good to finally hug your necks!

It seems that Erin’s time in front of the camera will soon be put on hold, though–she recently spoke of maternity leave:

These are the kind of days on set I'm gonna miss on maternity leave. ❤️ #hgtvhometown (?: our beloved DP Tim Harland)

Judging by she and Ben’s frequent updates, though, it sounds like filming for Home Town Season 2 is just about finished. And remember: you can watch this whole lovely story unfold when the show returns Monday, January 8th, 2018 on HGTV.

Which celebrities have used surrogates?

Chip and Joanna Gaines reveal the gender of their fifth child