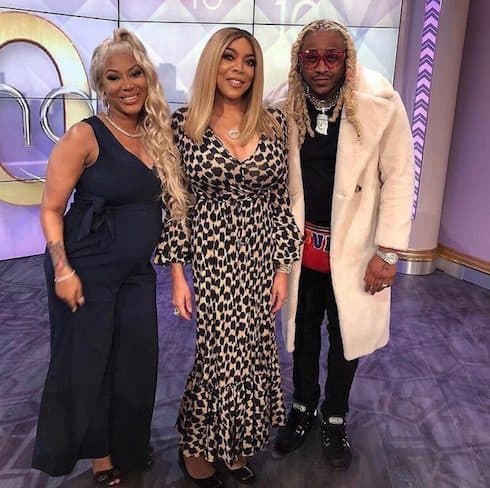 Is Lyrica having a boy or a girl? The Love & Hip Hop Hollywood star’s pregnancy has been the source of plenty of gossip throughout Season 5, but she and A1 took matters into their own hands by answering the questions everyone’s been asking. In addition to her due date, Lyrica revealed what she’s having — and confirmed her baby daddy’s identity once and for all.

Lyrica and A1 have been on a high-profile press tour lately, in promotion of the show and of the new music they each have coming out this fall. Today, they appeared on The Wendy Williams Show, and took the opportunity to basically spill all their own tea at one time.

Although Lyrica confirmed that A1 is her baby daddy as soon as she confirmed her pregnancy, the man’s identity was the first thing that Wendy brought up. So, when Wendy asked if A1 is the father, Lyrica simply smiled and said “Of course! Absolutely, Wendy.”

A1 added that he asked Lyrica to have a paternity test done on the fetus — which apparently can be done in utero — and Lyrica said she felt she “owed” it to A1 to agree. The test confirmed A1’s paternity: “I mean, I knew it,” he said, referencing Lyrica’s alleged tryst with Safaree, “but, you know…things happen.”

(In fact, both Lyrica and A1 acknowledged that they were unfaithful to each other during their break earlier this year. They didn’t name names, but it’s at least possible that the rumors about Lyrica and Roccstar and A1 sleeping with LaBritney could also be true.)

Lyrica also snuck in that she’s seven months pregnant. That’s considerably farther along than most of the gossip about her due date had suggested. The tea that accompanied the video of Lyrica rubbing her baby bump at she and A1’s gender reveal party in August claimed she was three months along then. So we’ve just assumed that Lyrica is about five months along now.

We’ll also point out that, since she has two months left in her pregnancy, Lyrica’s due date is more or less perfectly timed to coincide with the LHHH Season 5 finale in late November 🙂

But is Lyrica having a boy or a girl? Wendy sussed her out right away, picking up what Lyrica was laying down with the color of the dress she chose. “I wanted Wendy to be the first to know,” Lyrica said, “I’m having a boy!”

Even if she does give birth during this season, it’s unlikely that we’ll see an episode devoted to it until next season. But reality TV works in strange ways, so we’ll have to wait and see to be sure.

(Photo credits: Is Lyrica having a boy or a girl via Instagram)