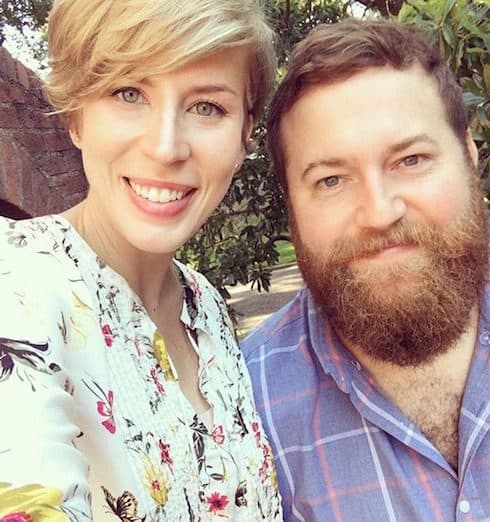 Back in late October, Erin Napier of HGTV’s Home Town shared a few eye-opening baby bump pics — and by “eye-opening” we mean her appearance was almost totally baby bump-free. At the time, Erin said it was the “first day of [her] third trimester,” and that she was “7 months [pregnant] exactly.”

We didn’t think much of that discrepancy at the time. It sounded like Erin was just starting her seventh month of pregnancy and had exactly three months to go until her due date. So we were quite surprised to see a handful of recent comments asking “Did Erin Napier have her baby?”, and were likewise shocked and delighted to note that yes, Erin and Ben are now the proud parents of their beautiful baby girl Helen!

Though it seemed for a moment like maybe Erin had meant to say she was *finished* with her seventh month of pregnancy, and had only two more to go, a recent explanation from Ben sorted us out. It seems Baby Helen, who was born at 6:00 AM on January 3rd, 2018, actually came two weeks early! Either way, we can confirm that mother and daughter and father are all doing just fine, thanks to the bounty of Erin Napier baby pics that she and Ben have shared!

Neither Erin nor Ben have shared any details about Helen’s birth — except for her height and weight, which we’ll get to shortly. First, here are the first photos Erin shared of the newest addition to the Napier family:

And here’s the first photo set from Ben, which he shared the following day:

It’s amazing the energy you get with 20 minutes of sleep and a strong cup of coffee. Of course, falling in love helps with that also. I never thought i could love @erinapier more than I already did, but I’ve been proven wrong. I ❤️Helen and her mama. #youlooklikeahelen

Here’s the first of what’s sure to be *many* touching updates from Erin featuring Ben doting over his baby girl:

I'm still recovering from surgery and focused on feeding her while he's been so focused on helping me take care of myself while he takes care of everything else she needs. He let me sleep for a couple hours last night while he sat up with Helen and held her while she cried when we couldn't think of anything else to do. I found him filing her razor sharp, paper thin baby nails this afternoon while my mom and I did chores around the house. And it breaks my heart wide open to see this mountain of a man caring for the littlest and weakest so tenderly, and the way he cares for me lets me know the hands and feet of Jesus are in this house. In other news, can't stop crying about how much I love them.

And the pair’s first “If you need a good cry today” update (as if the answer to the question “Did Erin Napier have her baby” wasn’t yet enough):

Read the link in my profile if you need a good cry today. @scotsman.co filled in for me over on the @laurelmercantile journal last night.

Home Town fixture and Laurel Mercantile co-owner Mallorie Rasberry also got in on the fun — and the dad jokes 😉 — with a photo montage update, complete with a *great* shot of a beaming Ben in surgical scrubs holding his little girl for what might have been the first time:

A few days later, Erin found herself grappling with what has to be the hardest part of early parenthood: How do you even want to do anything else, much less actually do it, when your beautiful perfect baby is right there waiting for you to fall in love for the umpteenth time that day?

Serious question: how am I supposed to do literally anything else but look at this blonde baby all day? SHE MAKES QUIET PUPPY SOUNDS ?❤️

And Ben’s also made it very clear what he’ll be up to for the foreseeable future:

Finally, here’s one more shot of Erin and Ben’s little baby Helen, complete with one of the biggest (and most heartwarming) size differences you will ever see. It sounds like Helen was nineteen inches long and weighed six pounds at birth:

We’re a bit late in saying this, what with the post-holiday lag and total site overhaul eating up a good part of early January, but: Congratulations to Erin and Ben! And welcome little Helen! Laurel just became that much nicer a place to live 🙂

(Photo credits: Did Erin Napier have her baby via Instagram)