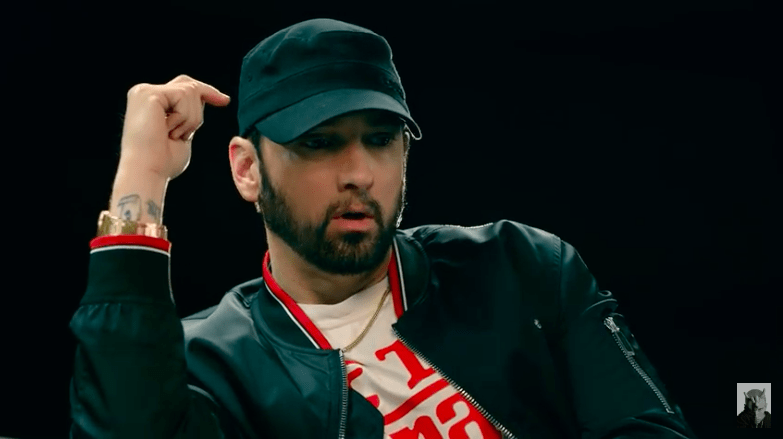 Eminem went on full attack at the rap community with his surprise album Kamikaze. It’s like he was itching for a fight with somebody and threw out a bunch of lures to see who would bite. Machine Gun Kelly bit back pretty hard and their feud gave life to social media and headlines until Cardi B and Nicki Minaj stepped up the vendetta game with an iconic shoe-throwing incident and subsequent social media shade.

Eminem fired a few lines in the song “Not Alike” that referenced a 2012 Twitter incident. Back then MGK sent out a tweet calling Eminem’s then 16-year-old daughter Hailie “hot.” Eminem was reportedly so mad at this disrespectful tweet that according to MGK – he tried interfering with MGK’s career, banning him from shows and trying to turn his record label against him.

MGK detailed some of this in his response, which was not a simple line in a song, but an entire track, “Rap Devil” including an accompanying music video. It definitely takes a lot of salt to come in blazing to a diss with such a huge amount of effort.

Mad about something I said in 2012
Took you six years and a surprise album just to come with a diss
Homie we get it, we know that you’re the greatest rapper alive
Fucking dweeb, all you do is read the dictionary and stay inside

MGK put this together within days of Kamakaze‘s crash into pop culture, but Eminem is taking a bit of time preparing his response. In a new in-depth interview series Em dropped on his YouTube channel tonight about Kamakaze, Eminem revealed that he does plan to respond to MGK. He also explained that taking aim at MGK wasn’t actually about the 2012 tweet about his daughter. Instead it’s about something “a lot more petty.”

Em’s full comments about the MGK situation are not included in this Part 1 of the interview hosted by Sway – it’s definitely edited to further whet our interest and leave us hanging. A preview of Part 2, however, teases that Eminem might just get into the meat of his pettiness.

UPDATE: Find out what Eminem had to say about what caused the MGK feud