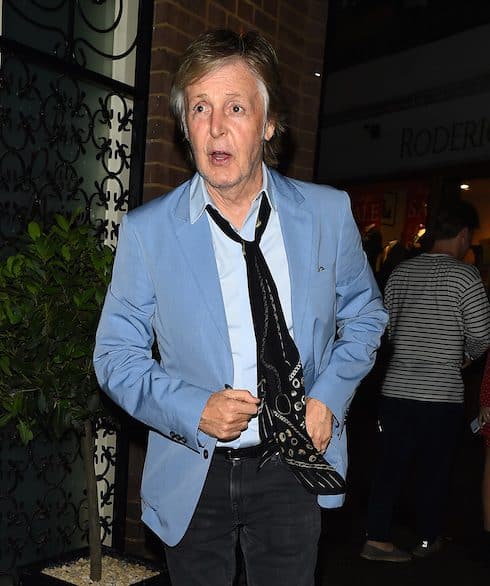 DLISTED – Here’s an image for you: In a new interview, Paul McCartney recalls a time when he, John Lennon, and several unnamed friends all masturbated together in the dark after a party at John’s house

THE BLEMISH – Food Network has announced it’s made a show called Sexiest Chef Alive in conjunction with People Magazine, and the winner will feature in the magazine’s “Sexiest Man Alive” issue this November. Kind of surprising that this sort of tie-in hadn’t happened until now, honestly

VOX – Yesterday a reporter asked Donald Trump what he learned from last year’s literally catastrophic handling of Hurricane Maria, which killed almost 3,000 Americans. Trump response: “I actually think it’s one of the best jobs that’s ever been done.” If you live in Hurricane Florence’s projected path, please get up and go

CELEBITCHY – Nicki Minaj says her fight with Cardi B was “so mortifying and so humiliating” — but only because it happened “in front of a bunch of upper echelon…people.” She also, among several other insults, called Cardi “angry and sad”

JEZEBEL – Viola Davis, on the press tour for her upcoming awesome-looking movie Widows, said that she regrets being in The Help. Davis’ issue wasn’t with the people she worked with or the experience itself, but was because “it wasn’t the voices of the maids that were heard.” We should all be very excited now that Viola is entering the bulletproof, truthsaying phase of her career

THE ASHLEY’S REALITY ROUNDUP – Confirmed: Former Bachelor and Bachelor In Paradise star Amanda Stanton, who was arrested for domestic battery in Las Vegas earlier this week, does indeed have a hot mugshot

REALITY TEA – The best part about this very good article on the possibility of Ashley Jacobs (and Thomas Ravenel) trying to get back on Southern Charm is how outraged it is. Note the perfect deployment of the phrase “COMPLETELY BATSH!T INSANE”

LAINEY GOSSIP – There is now a movie about former Colorado senator and presidential aspirant Gary Hart. The movie stars Hugh Jackman. This is absolutely the pinnacle of Gary Hart’s life

THE BLAST – MTV has just announced details of its extended Mac Miller tribute, which includes re-airing Mac Miller and the Most Dope Family, his reality show from 2012