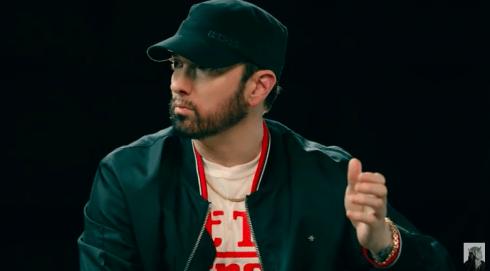 Part 2 of Eminem’s Kamikaze interview with Sway dropped tonight and it in, Sway directly asks Eminem about his high profile beef with Machine Gun Kelly. Find out Eminem really thinks about the situation.

“You went in of MGK,” Sway says. “You guys had a discrepancy. He mentioned it in his response song ‘Rap Devil’ you know that ‘Let’s call Sway and ask him why I can’t get on Shade 45.’” Shay reveals that this line refers to when he saw MGK on the street and didn’t know that the couldn’t come up to Shade 45, which is Eminemi’s radio station on SiriusXM. When he saw him again he told MGK he was sorry but he couldn’t come up right now.

Eminem then drops a bomb: he didn’t even know about the infamous 2012 tweet MGK made about Eminem’s daughter Hailie for a year. “It just never hit my radar,” he says.

MGK caused an uproar with the public when he called the then 16-year-old girl hot. When their beef heated up this summer, everyone thought the tweet was what sparked this hip hop war because Eminem mentioned it in his Kamikaze diss.

Eminem found out about the tweet a long time after it happened while going down the YouTube rabbit hole. He stumbled not only on the fact that MGK tweeted something inappropriate about his daughter but that he then went on a full “press run” about it. He thought that MGK “better chill,” but Em says this insisted not why he took aim at him in a verse.

Em says the “petty” reason he dissed him was because MGK said he was the “greatest rapper alive.” Then he got on Tech N9ne’s album and started sending shots at Eminem. It was hard to tell if he was really dissing him because they were “sublim” – subtle, cryptic disses.

?️‍♂️Eminem took to Twitter and put it together that MGK was really dissing him in verses. Then Eminem says he knew he had to respond, but didn’t want to. “I want to destroy him, but I also don’t want to make him bigger,” he said he thought at the time.

Because now you’re a f**kin enemy. So I’ll leave it at that. I’m not sure exactly what I’m gonna do right now because I’m still waitin’ to see . . .”

Eminem says he’s heard “Rap Devil” thought it was “good” for MGK. “He had some good lines in it.”

He also denied that he called Interscope to sabotage MGK’s career., something MGK alleged that he did. “It didn’t feel like a diss to me, it just felt like, pitiful,” Eminem says as he gets more heated. “Now I”m feeling bad about something that I didn’t have to do with.”