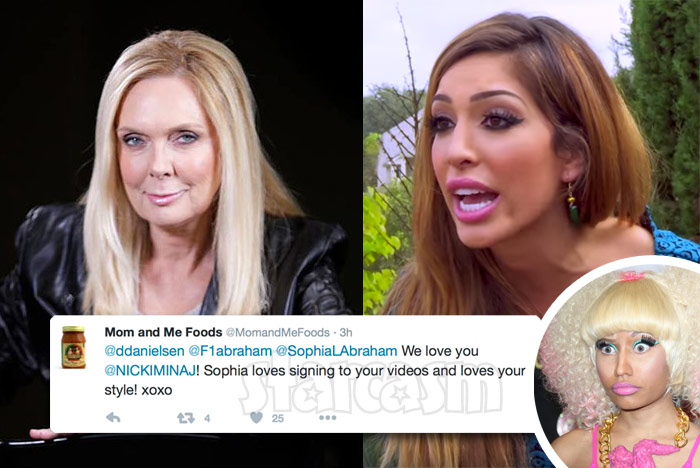 Yesterday, rapper Nicki Minaj inadvertently kicked off an epic, headline-grabbing feud with Teen Mom OG star Farrah Abraham when she was live tweeting a rerun episode and wrote, “Farrah is a c*nt to her mother.”

Surprisingly, Farrah’s mother, Debra Danielsen, remained quiet on her own Twitter account during the whole ordeal. Moments ago, however, it was revealed by Farrah that Debra had responded via their Mommy And Me Foods business Twitter account — and what she had to say DID NOT please Farrah in the least!

The account tagged Farrah, Debra, and Sophia’s Twitter accounts and wrote, “We love you @NICKIMINAJ! Sophia loves signing [sic] to your videos and loves your style! xoxo”

Farrah tweeted a screen cap of that message and wrote, “prime example thank you @NICKIMINAJ for creating another issue with my mom your [sic] such a saint #ignorant #Done.”

In addition to the screen-capped tweet from the Mommy And Me Foods account, Farrah also shared screen caps of what is presumably a series of texts between she and her mother about the tweet, and apparently some sort of activity on Facebook. Here is a transcript:

FARRAH: Did you write this?

FARRAH: ? Asked you a question

DEBRA: Yes. I did

DEBRA: Want her to know we are not fighting. We have no need to act ghetto baby.

DEBRA: We are above that. 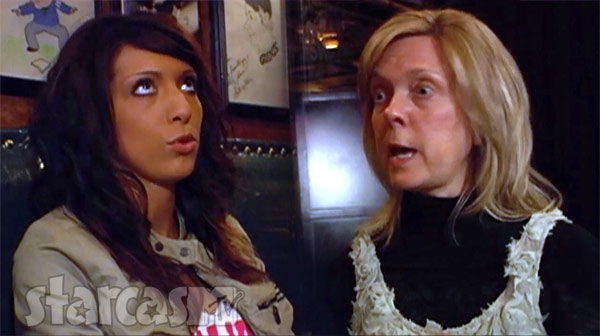 FARRAH: Stop your sh!t on Facebook…[cut off]…get mad at you peace and I’ll pray for you

DEBRA: What? I am not blocking any thing. I don’t want someone saying you treat me badly and saying bad things. If you are doing it for publicity ok just let me know. That is all. I am sorry. I won’t say anything.

FARRAH: There’ no publicity you are against me and I’m tired of caring about you and your things I’m done.

Farrah then shared a screen cap of a post made by someone else on Debra’s Facebook page, which included Debra’s appreciative response:

Ex.2:For all the ignorant minions just like @NICKIMINAJ here is another example of why I loose my patience #done pic.twitter.com/AyB7vMRotg

Wow! Debra seemed only to want to defend her and Farrah’s relationship and got met with a tidal wave of rage! Then Farrah posted screen caps of their personal text messages?! Farrah seems to be acting like a, um… I can’t quite think of the word. Nicki, can you help me out? UPDATE – Just to clarify Sophia’s opinion of Nicki Minaj, Farrah had her daughter post a video on Twitter in which she says, “Hi everybody! Nicki Minaj is a total loser.” Here’s the clip:

What does Farrah Abraham’s mom Debra Danielsen do for a living?