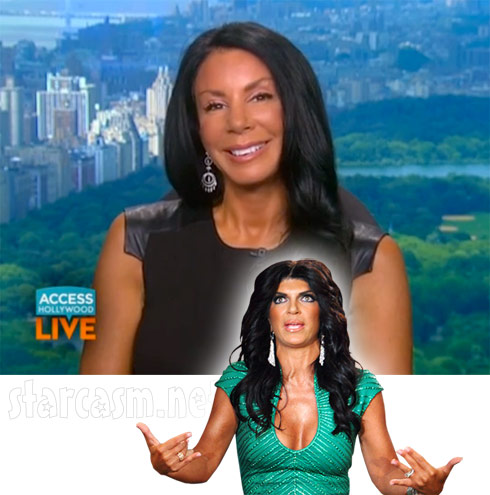 In what I’m sure was more like a slap in the face than a comfort, Teresa Giudice’s former Real Housewives of New Jersey nemesis Danielle Staub offered up her words of support for Teresa during an Access Hollywood Live interview earlier today.

Danielle, who was on the receiving end of Teresa Giudice’s infamous table-flipping “prostitution wh0re!” tirade in Season 1, not only had a message from herself to Teresa, but also wanted to convey a message to Teresa’s daughter Gia from her daughter Christine.

Here’s the video, which includes a table-flipping flashback intro:

“I wanted to be here with a message from my daughters and myself [to Teresa],” Danielle told Billy Bush and Kit Hoover. “Your kids are really all that’s important right now. Don’t worry about what everybody else is thinking, don’t worry about social media, don’t worry about the press,” Danielle added before awkwardly apologizing to Billy only. “Just live your life and know that whatever is behind you is done and you only have the future ahead of you. And this is not a lot of time that you’ll be away from them, but it’s going to be painful.”

Although she had no children at the time, Danielle Staub is no stranger to felony convictions after pleading guilty to felony extortion in 1986. That single felony count was originally eight felony charges stemming from a drug deal and kidnapping gone wrong, but those additional charges were dropped when Danielle agreed to testify against her accomplices. That arrest, and Danielle’s sordid life as Beverly Merrill, was detailed in the book Cop Without A Badge, which was what instigated the whole table-flipping incident. Annnnywaaaayyyssss… Back to 2014.

“My message for Gia from my daughter Christine… she said, ‘You know, I can relate to what she has in front of her. She’s the oldest and she’s going to be responsible for so much more, but just tell her that, you got this Gia and you’re strong and your mom will be back soon enough. And all of you just remember you’re a family. Nobody can break that,'” Danielle said. 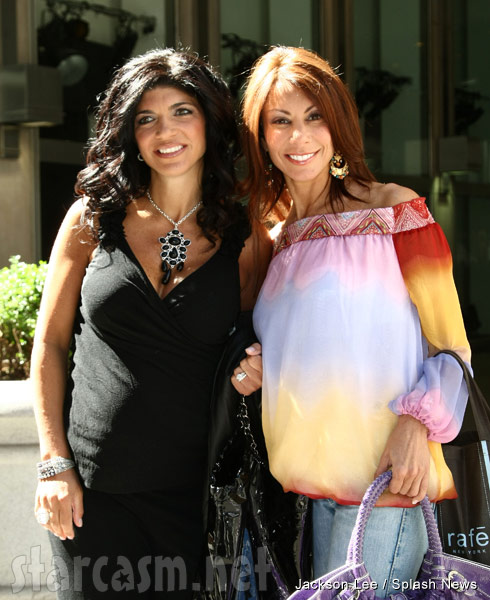 The interview and words of support come despite the fact that Danielle and Teresa have never buried the hatchet after their on-screen feuding. “No, we have not made amends,” Danielle said when asked about her current relationship with Teresa, “this is just who I am. I don’t believe you kick somebody when they are down. Just because they might have kicked you, doesn’t give me the right to do the same in return. Then when does it end? It’s just a vicious cycle… it’s coming from my heart. I’m genuinely reaching out to her and giving her support. This is a very hard time she is going through.”

Kit and Billy weren’t going to let Danielle off the hook that easy, however, and they pressed her on this “Yup” response and retweet of some rather harsh words in the wake of Teresa’s sentencing:

When asked about the tweet, Bravo’s version of Farrah Abraham (song, book, intentional sex tape, additional reality show appearances, stripping, LOTS of denial) got a bit evasive. “There was someone who Tweeted me and I said, ‘Yup.’ That was the only thing I said in this whole span and it was about karma. Karma came back. There was a lot I could have done on Twitter, if I wanted to. There was plenty on Twitter that I could have [done], but when I saw that it was just one of my fans, reaching out to me, I just said, ‘Yup,’ and how that was received, I realized maybe it’s going to be misunderstood, if I say anything. So, I just went quiet.”

Billy and Kit asked if Danielle’s daughters had attempted to reach out to Teresa’s daughters directly via phone or social media. “No, my daughters aren’t on Twitter,” Danielle said. “They never have been and they never will be. It’s just — it’s not necessary.” She then adds, “The only place that they would really be able to reach them is through a cell phone, so I would leave that up to them. They’re 16 and 21 now. I don’t see any reason for me to guide that missile.”

Interestingly, towards the end of the interview Billy reveals, “We just received word that Teresa is watching the program, so I think she says she has seen what you have said here and thank you very much for coming on from New York.”