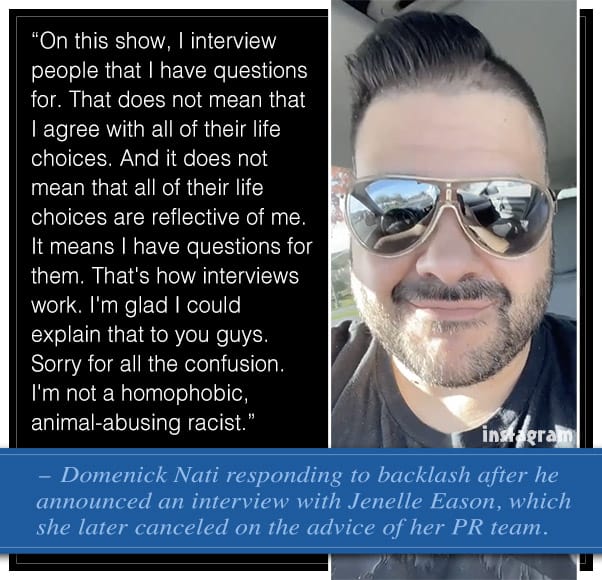 Soon after the cancellation, Dom took to social media to address some of the negative backlash he was receiving because he chose to interview Jenelle. During his series of Instagram story clips, Dom explains that interviewing someone controversial is not an indication that you support their point of view or life decisions. He even cites examples like CBS interviewing Charles Manson.

“Since the interview is not happening, I will address this now,” Dom began.

Domenick then brings up the fact that serial killer Ted Bundy was interviewed numerous times, as evidenced by the recent Netflix documentary Conversations with a Killer: The Ted Bundy Tapes.

I don’t know how you guys came up with this concept that when you interview someone, you take on all of their life choices. That’s actually not how it works. I never knew there was so much confusion.

I’m glad I could explain that to you guys. Sorry for all the confusion. I’m not a homophobic, animal-abusing racist.

This isn’t the first time a connection has been made between the Easons and notorious criminals. In honor of Father’s Day last year, Investigation Discovery included David Eason in a list of five “Frightening Fathers” that featured kidnappers, murderers and rapists like Ariel Castro, Larry Ray, Josef Fritzl and John List.

Detractors of Jenelle Eason, commonly referred to as “hatters” due to a typo years ago, are quite passionate. As soon as Jenelle announces any sort of business partnership, a campaign begins to inform the new business partner of all of Jenelle and her husband David Eason’s infamous life choices.

The backlash almost always results in Jenelle’s business partners breaking ties with her, whether it is a children’s clothing brand, a weed dispensary, or even a salon scheduled to host her cosmetics launch party.

#TeenMom2 Oregon's #BurntRiverFarms cannabis dispensary welcomed Jenelle & David Eason with "open arms" as they announced a meet & greet with the duo on Friday declaring "Haters Gonna Hate." The haters did hate & the event was cancelled. Get a full recap! https://t.co/m9Ywxcpv8q pic.twitter.com/lJmDl4hBXZ

However, Domenick is absolutely correct in pointing out that interviewing Jenelle is a completely different thing than going into business with her. I know that a lot of hatters resent Jenelle getting any sort of stage to speak on, but Domenick has a long history of interviewing controversial celebrities, and he has a proven track record of being able to get folks to respond to the tough questions people want answers to.

I know had Jenelle’s interview on The Domenick Nati Show penciled in on my calendar, and I was really looking forward to several headlines coming from it.

One thing Domenick didn’t talk about was the reason he was given for Jenelle’s cancellation.

Sorry I canceled my IG Live session yesterday! I cancelled the interview because I was advised to by my PR team. Maybe next time!

Unfortunately, Jenelle gave no further insight into why her PR team didn’t want her to do the interview. My guess is that they are aware of Dom’s ability to get folks to answer difficult questions, and they know that if Jenelle answers difficult questions, it probably won’t be good for her. That is purely speculation though.

Clothing brand @patpatshopping ends collaboration with #TeenMom2's @PBandJenelley_1 after public backlash, Jenelle calls them a "cheap ass company" that "flips" clothes from places like Korea. Watch her original Youtube review & get a recap of the fallout! https://t.co/Ad88dt3fKt

Speaking of speculation, my guess is that Jenelle will try to further promote her YouTube channel by doing her own interview — more than likely with her husband Daavid Eason replacing Domenick. Perhaps David could even sport some shades and smoke a cigar?

NOTE: Just because I am coming up with great PR ideas for Jenelle and David, that does not mean that I agree with all their life choices. 😉

Meanwhile, if you’re Jonesing for a Teen Momenick Nati fix, he recently interviewed OG dad Cory Wharton. According to the caption for the teaser, Cory “shades Farrah and tells all about Cheyenne.”