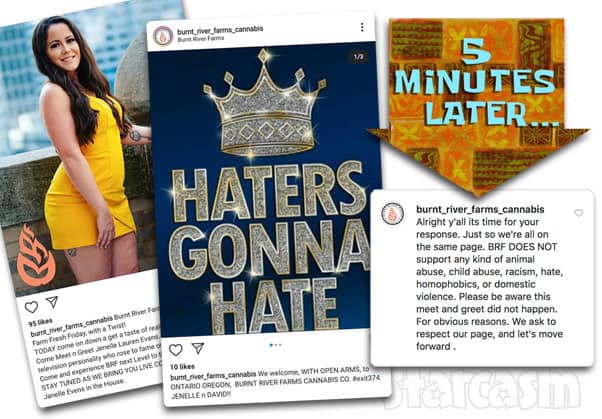 Disgraced former Teen Mom 2 couple Jenelle and David Eason continue to try to find new streams of revenue in the wake of their firings by MTV. Unfortunately for the Easons, their passionate detractors aren’t about to let any potential business partners or customers forget the extremely controversial things they’ve said and done over the past few years.

The dispensary proudly promoted the event on Friday with several posts on Instagram. “Burnt River Farms Presents Farm Fresh Friday, with a Twist!” the company began a caption that accompanied a promotional photo of Jenelle in a yellow dress (above) that included the company’s logo. “TODAY come on down a get a taste of reality. Come Meet n Greet Jenelle Lauren Evans. Janelle [sic] is a reality television personality who rose to fame on MTV’s Teen Mom 2.”

The caption concluded with more cringey brashness and creative misspellings of Jenelle’s name. “Come and experience BRF next Level to the Game! STAY TUNED AS WE BRING YOU LIVE COVERAGE. Janelle Evens [sic] in the House.”

The company shared another photo of Jenelle and David standing in front of the dispensary and wrote: “Wanna meet Jenelle yourself?! Come on down for a meet and greet at 2pm!” 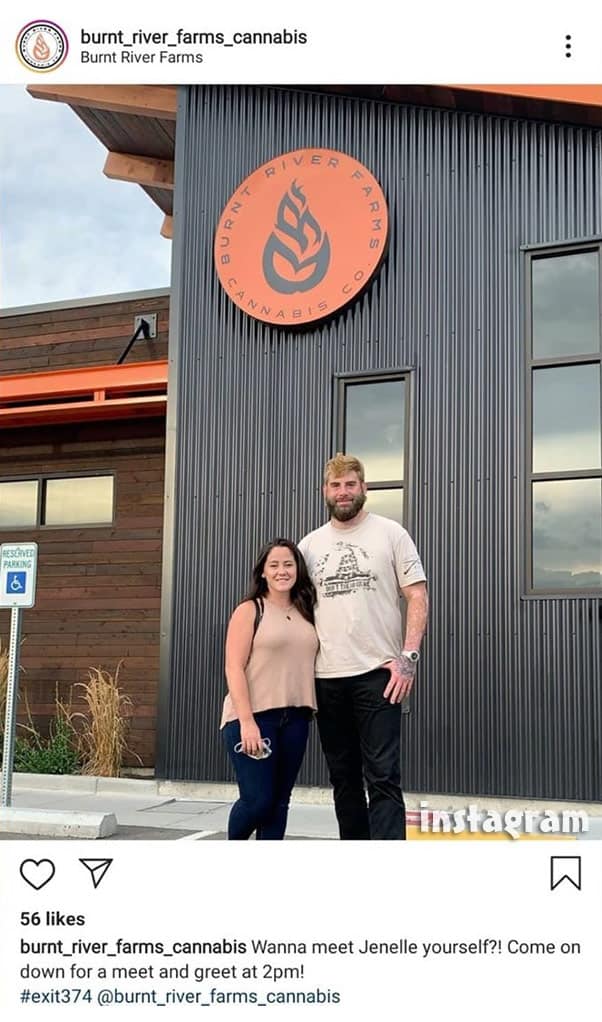 In case you missed it, David recently went blonde.

As you might expect, the posts began to get some rather harsh comments condemning the business for partnering with Jenelle and David. Burnt River Farms was undaunted, however, as they issued a challenge to the haters to bring it on: 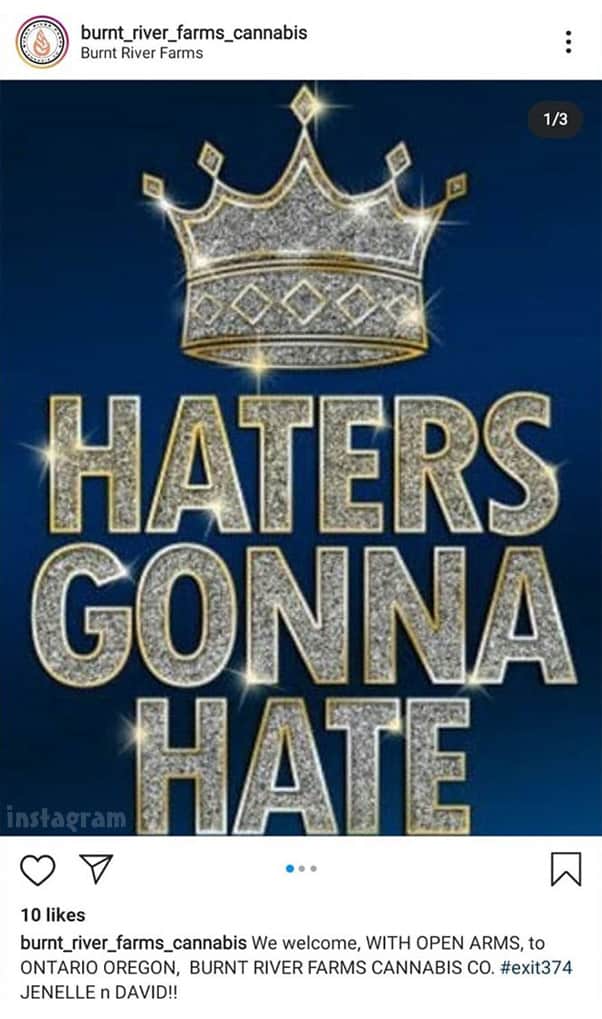 The haters did hate — or the hatters did hat, to use Jenelle vernacular. Awash in negative comments and negative online reviews, the “OPEN ARMS” of the Burnt River Farms Cannabis Company closed pretty quickly as they responded to phone inquiries about the meet and greet by informing callers that it was cancelled.

Jenelle confirmed the cancellation in typical Jenelle fashion — by pretending there never was an event scheduled in the first place. 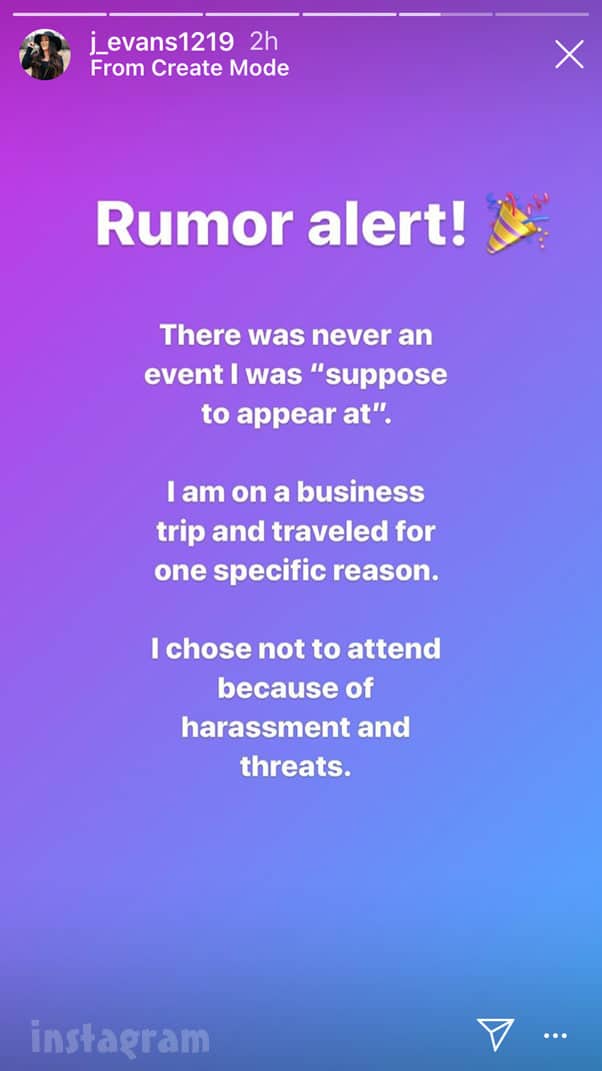 She seemed to change her tune a little bit in additional Instagram story posts. “Receiving a lot of messages and I’m very sorry if you expected to meet me. 💓 There will be later dates in the future for another opportunity to connect with me. Maybe do a live session on IG? Idk.”

In another post, Jenelle reminded everyone how great a parent she is when she’s away from her kids: “But I am super happy to say being out of town I was able to finally get a Nintendo Switch for Kaiser! 🥰 Thanks for everyone’s suggestions! I appreciate all your help! 🎉” She also shared a message that read: “Can’t wait to see my babies, the only ones that matter 💓”

After cancelling the meet and greet, Burnt River Farms Cannabis Company seemed to try to distance themselves from their Easonism conversion with a series of posts expressing sentiments contrasting the couple’s history. “I love my dog,” reads one story post. They also took a page out of Amber Portwood’s book by “sending love” to their Instagram followers by sharing a photo of the word “love” that featured a marijuana leaf instead of the letter “o.” Their caption reads: “To each and every one of our Followers and customers.”

Unfortunately for the company, the hatters weren’t feeling the love as they continued to inundate the company’s posts with criticism and condemnation. In the comments of their most recent post that included a photo of their logo and some other pot-themed images, Burnt River Farms FINALLY addressed the criticism head on with this statement:

Alright y’all its time for your response. Just so we’re all on the same page. BRF DOES NOT support any kind of animal abuse, child abuse, racism, hate, homophobics, or domestic violence. Please be aware this meet and greet did not happen. For obvious reasons. We ask to respect our page, and let’s move forward.

We weren’t promoting them or what they do. There was no compensation, they just wanted to know more about the weed business…

It wasn’t any kind of paid or promotional deal. They wanted to learn about the business and reached out to us. The meet and greet was an offer by them. We don’t support abuse, neglect or racism.

Just to be clear this was an educational visit and no money exchanged. Je was not here to promote our store or our products. Our job is to inform consumers about cannabis. We are a diverse company who loves dogs and all peoples.

[It doesn’t appear that the business has addressed their “Haters gonna hate” post, which seemed to acknowlgedge their awareness of the controversies surrounding the Easons and only antagonized the Eason detractors even more.]

Jenelle commented as well by implying that hatters who are gonna hat are actually just a couple very dedicated individuals. “Notice it’s the same people commenting every single time,” she wrote.

#TeenMom2 Jenelle & David appear to have broken up again 🙄 Plus, @MTV decides on her future! Oh, and why are people wondering if they are trying to grow pot on #TheLand? Get all caught up! https://t.co/zSxgN8PDIg pic.twitter.com/nnAsOzVaQL

Meanwhile, David and Jenelle both posted videos from a marijuana farm that was obviously being professionally recorded on video judging by the lighting and the camera equipment in the background. It seems clear that Jenelle and David are working on some sort of marijuana-related business endeavor, although it is unclear at this time what that might be.

Here’s David and Jenelle enjoying their time away from the kids in a field of marijuana:

Here are some theories about the reason for Jenelle and David’s trip to the weed farm off the top of my head:

1. The couple is taking inspiration from Jenelle’s arch nemesis Kail Lowry and plan to launch a line of CBD-infused products. This whole trip could have been arranged just to film and photograph David and Jenelle at an actual pot farm.

2. Some company like Burnt River Farms plans to launch a series of marijuana strains and/or products named after Jenelle. (I have to confess that it would be difficult for me to resist marijuana called “I seen Ya With Reefuh!”, “High! High! Ya Both High!” or “Feathers In My Hair.”)

#TeenMom2 @PBandJenelley_1 and her mother Barbara seem to be getting along swimmingly! Or should I say yogaingly? Plus, Jenelle says that her recent cross-country trip with husband David Eason has them thinking about expanding The Land to other states. https://t.co/qBzhn7eCTI

3. Jenelle has talked about purchasing land out of state before, she and David really enjoy the notion that they are homesteaders, and there have been rumors that the couple had a secret weed farm on The Land. Perhaps they are actually considering starting their own weed farm?! This one seems a bit far fetched for several reasons. Number one, I would assume that it isn’t super easy to get approved to have a marijuana farm, and the Easons have A LOT of red flags in their background. Number two, it would take a lot of capital to start a weed farm of any substantial size, and all the reports indicate that the Easons are not flush on cash right now. And just like getting approved for a weed farm, getting a loan would also seem to be hindered by the couple’s past.

4. Jenelle and David were actually hired by one of Burnt River Farms Cannabis Company’s competitors to set up the meet and greet and partnership in order to sabotage BRF. This is by far the most brilliant (and most unlikely) theory.

5. Jenelle and David just needed to stock up on weed. Unless they plan on driving back home like they did the last time they flew out to the west coast, this would seem like a really bad idea. Something tells me that the hatters have already alerted security at the Boise airport to be on the lookout for “that girl from Teen Mom” and “a blonde sasquatch” trying to sneak a large amount of marijuana on a plane. And if they try to mail marijuana to themselves, you KNOW the Columbus County Sheriff’s Office will be all over that!

What inevitably doomed business venture do you think inspired Jenelle and David’s trip to Oregon?

If you live near Ontario, Oregon and Burnt River Farms Cannabis Company’s support of Jenelle and David has you looking to purchase your marijuana elsewhere, it looks like Weedology on East Idaho Ave. has pretty good reviews. Hatters gonna smoke, amirite?