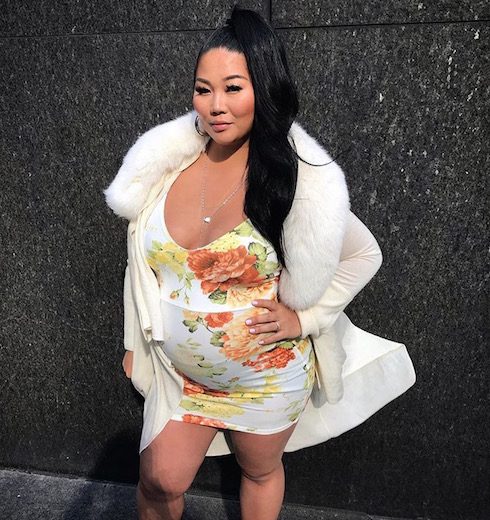 Black Ink Crew‘s season is almost wrapped, and it’s been a hot minute since we’ve put together a pregnancy update on our favorite cast member. So, did Young Bae have her baby yet?! Despite earlier reports of a spring due date, it looks like our initial prediction of a summer solstice baby will turn out to be correct.

Back when she made her official pregnancy announcement on social media, Bae said she was at about 22 weeks. Given that the average pregnancy is approximately 40 weeks long, we pegged her due date at roughly June 21st. And, while Bae hasn’t yet revealed her *exact* due date, she did recently confirm that she and her fiancé Bobby are expecting their first child together in June.

Bae’s also been updating her Instagram feed with plenty of baby bump pics on the regular. Here’s a trio she shared from her recent maternity shoot, in which it looks like she’s taking the route some of her fellow VH1 reality stars (LHHH’s Alexis Skyy and LHHATL’s Joseline Hernandez come to mind) and going glamorous while staying tasteful and true to herself:

In addition, Young Bae fan account @YoungBaeBlackInk managed to get their hands on a couple of behind-the-scenes shots from the shoot:

Hopefully, the birth of Young Bae’s first child will be the beginning of a more chill period for the Black Ink Crew star. (I know, since when do babies mean things get calmer, but hear me out.) It’s actually been a pretty over-the-top year for Bae: in addition to the crazy beautiful Times Square marriage proposal Bobby dropped on her, Black Ink‘s extended trip to South Korea to help Bae find her mother and explore Bae’s mysterious past generated some of the most dramatic scenes in the show’s history.

Of course, Bae is never one to take her success for granted. And, as she recently explained in the same Tattoo.com interview where she disclosed her due date, at least Bae’s customers aren’t literally sh!tting on her anymore 🙂 When asked if she had any funny stories to share from her career — and which one was the funniest — Bae had this to say:

Yes, I have sooo many! From walking in on an artist and client having sex in the shop to a girl farting in my face while giving her a tramp stamp…I can go on and on. However, the story that is the most outrageous is when a potential client sh!tted on the floor. Yes, took a dump. It’s disgusting but true. She walked in with two small children for a consultation and I was talking to her behind the counter. I smelled something but thought it was one of the young kids. It was not. When she left, there was evidence of her disaster along with footmarks. Ewwwwww.

Don’t worry, Bae — you’ll have a beautiful little child to clean up after soon enough 😉

Finally, we thought we’d close with this Young Bae baby bump pic of Bobby’s. He shared it on Instagram a couple of months ago, so it’s hardly new. But we missed it until now, and it’s a really nice, beautifully silhouetted shot. You might even think of it as the calm before the storm:

Beauty and the baby

(Photo credits: Did Young Bae have her baby via Instagram)

Blac Chyna baby prognosticators say it’s a girl, but could be a boy (or both)