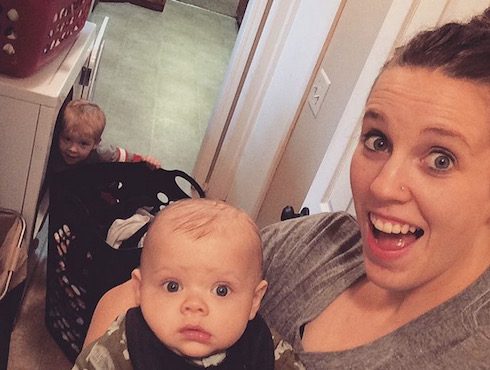 A recent pic of the Dillard family breadwinner making out with Derick under the family mistletoe sparked speculation another baby might be on the way. For now, it’s all speculation — is Jill Dillard pregnant again?

We’ll begin with the photo in question, which Derick shared a few days ago. His choice of hashtags certainly makes it sound like he’s excited to be kissing his wife, but note the location of Derick’s hands:

That time of year when you look for as many opportunities to kiss under the mistletoe ??? @jillmdillard #kissunderthemistletoe #christmasparty #themostwonderfultimeoftheyear

That’s right: nothing proves the passion and heat of a relationship like a kiss with your hands in your pockets. At least Jill is going for it.

Anyway, that photo has the gossip world abuzz, as several articles on the baby bump that Duggar fans “think they spy” can attest. To those, we’ll add that Jill appears to be using the Kylie Jenner playbook of late: it’s been over three months since she shared any photos of herself that were more than chest-up, and even that early September pic featured her children in front of her abdomen.

With that said, Jill has had two difficult pregnancies and deliveries so far. She was in labor with Israel David, her first child, for more than 70 hours of labor before opting for a c-section; Samuel Scott, born this past July, needed over 40 hours before Jill again required a c-section.

Plus, as The Hollywood Gossip suggested, “it’s perfectly normal for [Jill] not to have ‘bounced back'” just five-ish months after giving birth (to say nothing of “the rumored problems she and [Samuel] faced” following the emergency c-section that brought him into the world.

All we can say for sure is that, with a new season of Counting On all but assured, a Jill Dillard pregnancy would be the best way to ensure Jill doesn’t meet her husband’s reality TV fate.

In other news, Derick Dillard has a new haircut…

…which at least one outlet has already deemed “the worst in the history of ever.” Considering that Jill gives Derick his haircuts, this might actually be the best proof we’ve got that she’s done having children.