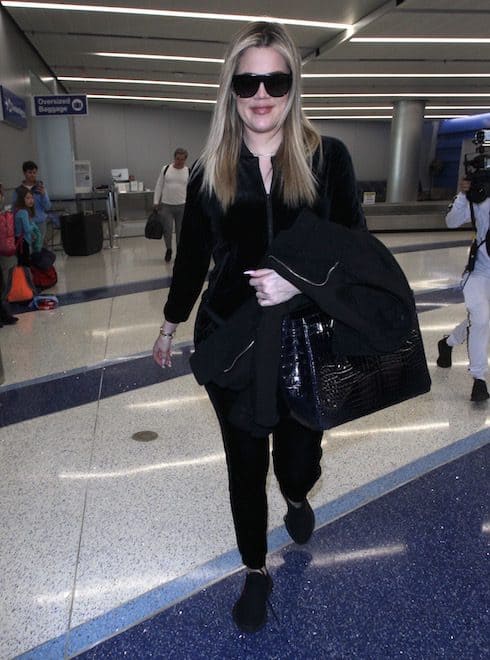 In case you’d forgotten, what with Kim Kardashian having her third child via surrogate last month and naming that child Chicago and then Kylie Jenner topping her by finally confirming her pregnancy by announcing her daughter Stormi’s birth earlier this week but three days after Kylie actually gave birth, Khloe Kardashian would like to remind you that she, too, is pregnant.

The 33-year-old, at risk of becoming the Jan Brady to Kim’s Marsha and Kylie’s Cindy, dropped a new pair of Khloe Kardashian pregnant pics on her Instagram page in order to keep fans abreast of her baby bump, which is now in its 29th week. Khloe, seen above walking through LAX on January 28th, has made a habit of hiding her baby bump behind huge overcoats and purses while in public and then flaunting it in high-quality pics on social media.

She stuck to that script with her latest update, in which she looks as glamorous as ever:

The above images are actually the second and third Khloe Kardashian pregnant pics we’ve gotten over the past few days. After Kylie announced Stormi’s birth, Khloe shared a photo of she and Kylie posing with full baby bumps in view, along with a note of congratulations for Kylie. The photo isn’t dated; judging by the size of the bumps in question, though, it looks to have been taken fairly recently:

Congratulations My Sweet Kylie! What a magical ride it's been! I'll miss you bumping along with me. Never in a million years did I think we would do this together but it's been that much more special because of it. God is so great!! He had His plan all along! I love you little mama ? love big mama

In other Khloe Kardashian pregnancy news, Kardashian home network E! reported on an interview Khloe gave with British television presenter Ross King in which Khloe revealed she once considered surrogacy.

Said Khloe, “I mean, I thought about surrogacy at one point but then it just didn’t cross my mind. And then when I got pregnant, I was just so surprised….When you hear all of these things about yourself, you just start believing them and I was just in shock I think as much as everybody else.”

Devoteés will recall that Khloe actually brought this topic up months ago, in connection with the then-recent news that Kim Kardashian and Kanye West were using a surrogate to have their third child. At the time, it seemed pretty obvious that what Kim really wanted was for she and Khloe to star in a Keeping Up With The Kardashians spin-off about pregnancy and surrogacy and how they could now write off the latter as a business expense. No word on whether the cameras actually rolled.

Khloe Kardashian’s baby is due in late March.