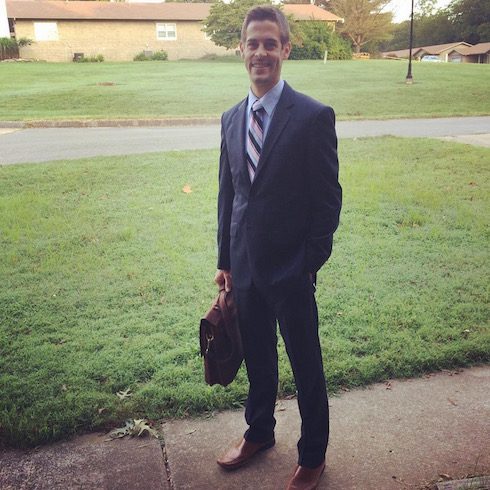 Last week, it was allegations that both Derick Dillard and his wife Jill are potentially cheating on each other. This week, it’s a question of the couple’s finances: namely, does Derick Dillard have a job? And, if so, what is it? Jill’s recent references to Derick’s “work” have both fans and detractors wondering exactly what it is that Derick does.

In Touch was the first to report on the curious word choice — and, more precisely, of observers’ reaction to it. As their story points out, Jill has now twice in the past week mentioned Derick “going to work,” and specifically *not* that he’s been busy “going to school.”

So it’s possible that Jill is using the word “work” to describe Derick’s time at law school…but that wouldn’t account for the posts in which she references school without mentioning work. (It’s also possible that Derick spends some sizable portion of his time trying to generate controversy, a task that’s no longer as easy as it once was now that he’s off the airwaves.)

Jill’s most recent reference came a few days ago, in an Instagram post she used to gush over how much she loves Derick:

Love this man! ? He gets up early to head out before traffic gets bad, works all day, then comes home after most people and puts out more energy to invest in our boys and me! ? @derickdillard you’re still my fave! #forevermine❤️ #manofmydreams #youvegotmyheart #imsoinlove
#thankyou #gratefulwifey

Jill also dropped the w-word in a post back on primary day this past May, when she had to take her children with her to vote as Derick was at work and couldn’t watch them:

We just voted! Teaching ‘em young the privilege of letting your voice be heard…and took both boys with me since Derick was at work. lol

Derick did spend a good portion of last year working his and his extended family’s fanbases for donations. His stated goal was “funds for a one-year ministry,” but raising them turned out to be quite a challenge. Derick’s first fundraiser was shut down by its hosting site, since the site was for charities only, and Derick, despite his seemingly good intentions, did not meet the criteria. After that, he turned to GoFundMe, where the fundraiser fizzled.

It might also be worth pointing out that Derick and Jill may never have actually been paid for their appearances on Counting On. As we’ve written before, it’s possible that “some (or all) of the family members…signed away their appearance fees and let all their payments go through Jim Bob [Duggar],” who may be collecting the fees via his production company.

If this is the case, it’s likely that “all of the income received [goes] into a trust belonging to a corporation,” one with Jim Bob “as the majority shareholder,” to keep the payments from being taxed. “[It] isn’t taxed,” our source explained, “if the money is being spent on the trust beneficiaries, hence the houses as payment.”

So, while he may be a lawyer someday, Derick could be scrounging about for side jobs indefinitely, just to have a little financial freedom from the Duggar family.

(Photo credits: Does Derick Dillard have a job via Instagram)

We have some questions about Kanye West’s Star Wars houses