Since the passing of My 600 Lb Life star Coliesa McMillian last week, her family has been overwhelmed by an outpouring of support on Coliesa’s social media pages. But, for yet-undisclosed reasons, TLC appears to have ordered the Coliesa McMillian episode removed from circulation — the Season 8 episode is no longer available for streaming.

Coliesa’s death from kidney failure and surgery complications came as a shock to the My 600 Lb Life fan community. Unfortunately, though, it marked the end of a painful year for Coliesa, who spent much of 2020 hospitalized and in critical condition. In fact, she was in a medically induced coma when her My 600 Lb Life episode debuted earlier this year. It was only after Coliesa passed that we found out she had to be hospitalized for six weeks following a ruptured suture and resulting sepsis after her gastric sleeve surgery.

But fans who’ve tried to revisit Coliesa’s weight loss journey since hearing about her death are currently without an outlet. Some point in the past week saw the My 600 Lb Life Coliesa McMillian episode removed from TLC’s web site. The order for Season 8 jumps from Episode 11 (Jeanne Covey) straight to Episode 13 (Dominic Hernandez), without any explanation: 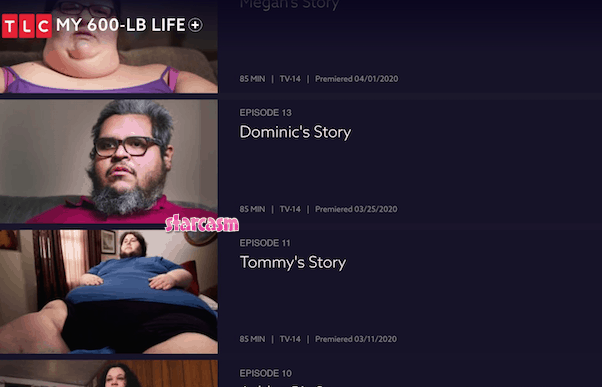 Though eight members of the My 600 Lb Life cast have died to date, Coliesa’s episode appears to be the only one not available. (It’s also worth pointing out that Coliesa is not one of the ten My 600 Lb Life cast members suing production company Megalomedia for fraud and negligence.)

After Coliesa’s family announced her death, TLC offered its condolences in a tweet. “TLC is saddened to learn of the loss of Coliesa McMillian, who shared her story on My 600lb Life,” the network wrote. “Our deepest condolences to her family at this difficult time.”

On a related note, Coliesa’s family has also announced that the support group page dedicated to her fans will, in fact, be staying up. Shortly after Coliesa’s death, the family announced it would be removing the page — but the overwhelming “love and support” they’ve received through the page has convinced them otherwise.

After the last few days that we have had, and phone calls, out pouring of love and support I will be keeping the support page up. But I am also making an actual profile on facebook. I dont know any of you but it is amazing how much love and supportive and guinuwine each of you are. She did not know how much she meant to everyone. But she was one of a kind. I hope her life means as much to others as it did to us. But even though it hurts so bad that she is gone, her death will not be in vain, she will set precedent for what is about to happen. We love and appreciate each of you. Thank you so much.

If you’d like to join other fans in sending a message of support, you can do so here.

We’ve reached out to both TLC and Coliesa McMillian’s family about the episode removal and will update the article if we hear back.