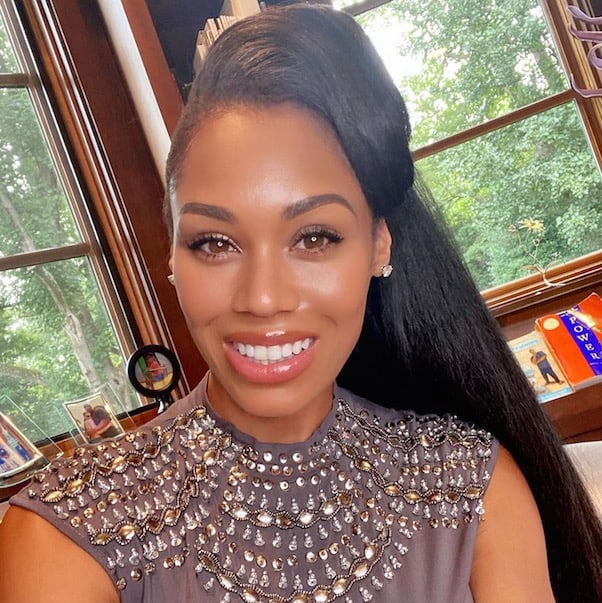 Gossip about Monique Samuels fired from the Real Housewives of Potomac cast is just that, for now. But Monique seems to believe that her firing could be just around the corner, and that her fellow castmates are the ones working to push her out in the wake of the episodes featuring her barn brawl with Candiace Dillard. Monique claimed the rest of the cast has a strategy for her removal, and that she hopes the upcoming reunion episodes will potentially offer a fresh start — but that Monique herself is not one to forgive and forget.

Monique’s speculation about her “very strategic” fellow RHOP cast members came in a new interview with Us Magazine, one of the first she’s given since the show aired the Monique-Candiace fight. (The fight actually occurred almost a year ago, in late October of 2019.) In the interview, Monique claimed the rest of the cast’s meeting in the wake of the fight was really a strategy session to figure out how to show her the door.

“They met off camera,” Monique explained, “and had a little meeting and I think that it was very strategic, what they decided to do. They looked at this as an opportunity to possibly get me off the show. They thought they had that type of power to get me fired. So that was very strategic.”

Monique also accused Candiace of “play[ing] the victim right now,” and said that there are “so many layers” to the fight, the bad blood for which evidently began because Monique thought Candiace was spreading rumors about the paternity of Monique’s youngest child chase.

Further dishing on Candiace, Monique had this to say:

So, is Monique Samuels fired? Or is this all just the nasty fallout from one of the nastiest fights in Real Housewives history? As far as Candiace is concerned, Monique has already justified getting the axe from the network.

In response to Monique’s claims, Candiace had this to say:

[Monique] did enough damage to get herself fired. I was never involved in the spreading of rumors or plotting that her former friends came up with and she knows that. It’s why she never brought it up to me. This all could have been avoided if she had kept her hands to herself, or at the very least, owned that she lost control. Instead, she chose to tell anyone who would listen that I provoked her by throwing a glass. We’ve all now seen the footage.

As for the aforementioned reunion? It looks like regardless of what happens there — and it’s likely no cast has ever been so grateful for reunion via Zoom — the door is closed on a full reconciliation between the two women. Monique basically said as much in her interview’s closing statement.

“I am one to never say never,” said Monique. “But I’m never going to be friends with [Candiace] again.”