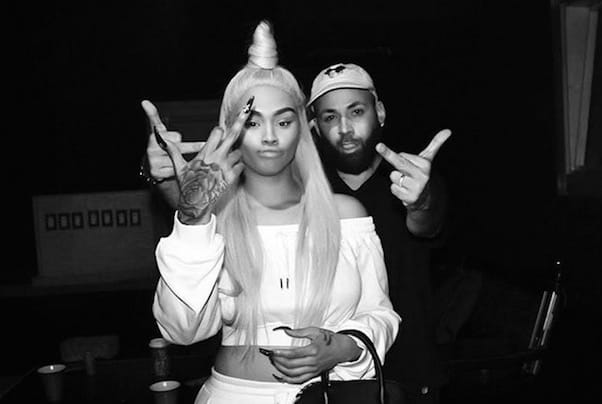 It looks like newbies Summer Bunni and Antonio Velaz are singlehandedly driving away the old LHHH cast and remaking the show on their own terms. Yesterday, we reported that A1 and Lyrica Anderson had split up following A1’s affair with Summer and the couple’s physical fights with both Summer and Antonio. Now comes gossip that Summer’s love triangle with Blac Chyna and Soulja Boy from earlier this year will be a part of her storyline for Love & Hip Hop Hollywood Season 6 — she’s said to somehow be bringing both Chyna and Soulja Boy onto the show.

First up, in case you missed it: apparently A1 and Lyrica, who’ve been cheating on each other almost since they made their LHHH debut, have split once more. Lyrica is said to have moved out of the couple’s house after hearing enough of the rumors that A1 and Lyrica slept together earlier this year. Nor did it help that Summer and Lyrica got into a “huge brawl” during filming a few weeks back. After that fight, Summer used an Instagram story to claim that A1 had been trying to have sex with her and another man for weeks, and that Lyrica had been threatening her with messages sent from burner phones.

Based on that tea alone, Summer would have more than just being Offset’s mistress as her claim to fame once the LHHH new season airs. But it looks like the drama is just getting started. Summer’s manager, Antonio Velaz, is also joining her in the cast this year. And according to the noted gossip account @VH1iNFO, Antonio’s been doing his part to draw attention to the controversy over A1, Lyrica, and his client.

Per the account, A1 “attacks” Antonio Velaz in a scene set at a merch event hosted by Ray J this season, and A1 and Antonio also “get into it” at an undisclosed “event” sometime in Season 6. It’s not clear if the two quotes refer to two different fights, or if they’re different descriptions of the same fight; knowing what we know about Summer and Lyrica, though, one fight is probably more than enough.

But of course there’s more. A recent Hollywood Life article further claimed that Summer, who in early 2019 was involved in a love triangle with Blac Chyna and Soulja Boy, is bringing the other two parts of that relationship onto the show. It seems that Summer got pissed when Chyna and Soulja decided to make it a twosome even though Summer had been with Soulja first. So now she’s possibly using her status as the show’s newest resident wrecking ball to drag them both as publicly as possible.

The love triangle between Blac Chyna, 30, Soulja Boy, 28, and Summer Bunni, 20, will unfold on the small screen. This trio just got more dramatic after Chyna and Soulja reportedly decided to make their faux relationship into a real one….Summer had actually been dating Soulja since the first week of January…yikes! We can now turn for answers on Season 6 of Love & Hip Hop: Hollywood. Chyna, Soulja Boy and Summer “are going to be on the next Love & Hip Hop: Hollywood,” a source EXCLUSIVELY tells HollywoodLife! And there’ll be one other key player in the upcoming season, our source tells us: Antonio Velaz.

We should point out that neither Blac Chyna nor Soulja Boy has been spotted filming for Love & Hip Hop Hollywood since production began earlier this year. There was some gossip about Blac maybe joining the cast a couple years ago, but nothing ever came of it. And Soulja Boy hasn’t been on LHHH since Season 3.

It’s more likely that Summer Bunni and Antonio Velaz cooked up the idea themselves. After all — and as HL’s article does point out — Antonio is both Summer’s manager and a friend of Chyna’s:

The takeaway here is that, for good or ill, the LHHH new season looks like it will be messy as hell 😉 Love & Hip Hop Hollywood Season 6 will premiere later this summer on VH1.