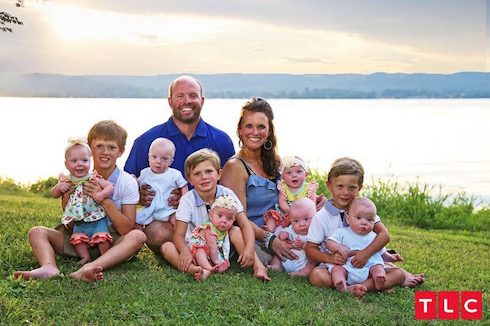 TLC reality stars Eric and Courtney Waldrop have had their lives turned upside down ever since Sweet Home Sextuplets began filming in the middle of Courtney’s pregnancy last year. The couple, already parents of three children, became nationally known after Courtney announced she was pregnant — and quite unexpectedly! — with sextuplets.

Though the odds of conceiving sextuplets naturally are almost too astronomical to consider, fertility treatments do increase a woman’s chance of a multiple birth. In fact, they sometimes dramatically increase the chance.

So, did Sweet Home Sextuplets use fertility drugs? And which drugs did they use? Since her sudden rise to fame, Courtney Waldrop has explained how she came to be pregnant with six children at once.

Did Sweet Home Sextuplets use fertility drugs? Which drugs did Courtney use?

(For our complete bio of Courtney and Eric Waldrop and the Sweet Home Sextuplets family — including all of the sextuplets’ names — click here.)

Courtney and Eric both knew they wanted another child beyond their first three. But, as Courtney told AL.com, they really meant just that: “one more child to fill out their family.”

Courtney, who suffered a miscarriage during this time, started taking “a low dose of a fertility drug” to help her chances of conception. She and Eric did know that “twins [were] a possibility” with their fertility drug.

But the couple thought the likelihood of such an event was low enough to give the drugs a try. The low likelihood of risk was a further incentive.

OK, but did Sweet Home Sextuplets have IVF as well?

Believe it or not, Courtney and Eric don’t appear to have used the technique. In-vitro fertilization is well-known for producing multiples — twins and triplets aren’t at all uncommon with the procedure.

But Courtney has never brought up IVF as a method of achieving pregnancy. She has mentioned that she went on an unspecified fertility drug while trying to get pregnant with her fourth child.

However, Courtney hasn’t ever revealed the exact name of the drug itself. She did stress to the Gadsen Times that she was on a “very low dose.”

And she further revealed that at one point, she was originally pregnant with eight children.

Originally, doctors “saw six (placental) sacs,” Courtney said, of her first ultrasound. But, when she and Eric went for a follow-up one week later, doctors counted eight sacs.

“We were distraught, worried, scared,” Courtney admitted, “anything but happy.” By her third ultrasound, though, two of the placental sacs were empty, and doctors registered six heartbeats.

What are the odds of having natural birth sextuplets?

It’s almost unheard-of for sextuplets to be conceived without fertility drugs. As we’ve written about in our article on the Busby quints, there’s a basic rule of thumb for calculating the likelihood of multiple births. It’s called Hellin’s Law, and was itself conceived by Polish pathologist Dyonizy Hellin in the late 19th century.

Hellin’s Law (which is really more a rule of thumb than a hard-and-fast law) states that a pair of twins will occur once every 89 births. To find a likelihood beyond that, you simply multiply the previous result by 89 once more. Te likelihood of triplets is 89 cubed; the likelihood of quadruplets is 89 to the fourth power; and so on.

Based on Hellin’s Law, then, here’s how likely it is for a woman to conceive every multiple up to and including natural birth sextuplets:

(If you’re especially interested in fertility mathematics, you might check out this paper on the history of Hellin’s Law, its reliability, and its shortcomings. Though I assume you’ll only have the time to do this if you’re not also the parent of sextuplets yourself.)

However, fertility drugs do generally increase a woman’s chance of a multiple birth by about 20%. And, as we explained the aforementioned Busby quints article, one other factor that increases your chances is actually being a bit older.

You’re about 4% more likely to have a multiple birth if you’re between 30 and 34 at the time of conception, and 5% more likely if between 35 and 39. And Courtney Waldrop, for those of you wondering about her age, was 35 years old when she became pregnant with she and Eric’s Sweet Home Sextuplets in the spring of 2017.

So Courtney was actually about 25% more likely to have sextuplets than the average woman. That means her odds were *only* 4,188,044,587 to one. And once you’re knocked down to one in just over four billion, you’re hardly worth talking about anymore. 😉

Of course, natural sextuplet births do happen. One of the most recent examples is that of Adeboye and Ajibola Taiwo.

The couple made headlines when Ajibola gave birth to six healthy babies at Virginia Commonwealth University Medical Center in the spring of 2017. The Taiwos had been trying to get pregnant for 17 years before finding out their efforts paid off — and with interest!

As Courtney herself shared several months before she and Eric’s six babies were born, both she and her doctors were worried about Courtney’s health just as much as they were the sextuplets’. One worry in particular overrode most others: namely, that Courtney make sure she ate enough to keep herself and all six fetuses in good shape.

“All babies are growing like crazy and so is my belly,” Courtney wrote last August. “Concern at this point is being able to take in the huge amount of calories required to keep this many babies and myself healthy. So please pray that my appetite will allow me to eat like I’ve never eaten before. I’m determined I can do this!!!! ”

Again, we’ll revert to the example of Danielle Busby and her quints to give you an idea of the kind of intake we’re talking about. Danielle’s pregnancy diet was “laughable,” she said, shortly after giving birth to her five daughters. And by “laughable,” she meant it was a battle to consume the 4,500 daily calories she needed for herself and her girls.

“I tried my best to do it,” Danielle said, with a smile.

Speaking of trying one’s best: make sure you remember to tune in to Sweet Home Sextuplets Tuesday nights at 10 on TLC.