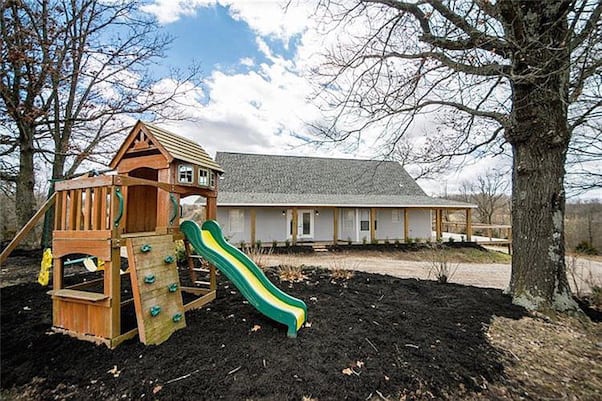 The reason why they’re moving remains a mystery, but Anna and Josh Duggar have just dropped the price on their Siloam Springs AR house. The couple appear to have moved out weeks ago, all their recent social media updates have come from other Duggar family residences — and, as usual for the family, there’s plenty of gossip and speculation about what’s actually going on.

As we reported last month, Anna and Josh Duggar put their five bed, three bath, 2,985 square foot rural Arkansas home on the market for $299,000. Exactly one month later, the couple dropped their asking price to $289,000. Among the house’s amenities are its location within the Ozark National Forest; a brand-new security system complete with “wireless area perimeter sensors”; a 210-foot zipline in the front yard; and close proximity to both a fireworks outlet (3.9 miles) and the Cherokee Casino & Hotel West Siloam Springs (9.4 miles). Evidently there’s plenty of good sinning to be had in the neighborhood!

Anna and Josh purchased the house in January of 2015, and shady circumstances soon followed. That August, the couple earned a $10,000 profit by selling the house to an LLC run by Josh and Duggar family attorney Travis W. Story two days before adult actress Danica Dillon sued Josh for sexual assault. Under Arkansas law, property owned by an LLC can’t be seized in the event of a personal lawsuit involving one of the LLC’s owners; the money for the sale is believed to have come from Story. Josh and Travis filed paperwork establishing their company the day before selling the house.

And it’s Story who still technically owns the house, even though Josh and Anna Duggar and their children are the ones who’ve lived in it since completing its remodel a little over three years ago. Rumors about why it’s for sale in the first place — it’s not like the family has outgrown it — range from a pending divorce to general bad vibes to the couple’s inability to pay for it. Anna hasn’t shared an update from the house since mid-January:

Michael was super thrilled we had enough snow here in Arkansas to go sledding with cousin Tyler! Willow seems to be enjoying the snow too!

Anyway, if you’ve been considering buying some real estate in northwest Arkansas, you can check out more photos of the house here. If Anna and Josh continue dropping the price at this rate, you’ll be able to get the house for under $200 grand by early next year. Patience remains a virtue.