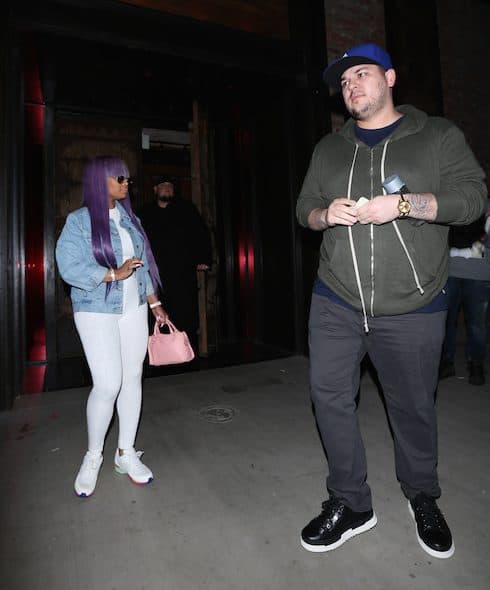 We’ve got a brand-new Rob Kardashian child support update, and it’s a doozy: According to court documents Rob’s lawyers filed this week, their client’s income has dwindled so much that Blac Chyna should actually be the one paying *him.*

You may recall that last year a court ordered Rob to pay Blac Chyna $20,000 per month in child support for the former couple’s daughter Dream. Rob protested the decision at the time, but appeared not to have many options; he and Blac share 50-50 custody of Dream, and, per the terms of that agreement, Rob risked losing time with his daughter if he fell behind in the payments.

(Rob does stand to inherit a quarter of the $100 million trust fund his father Robert Kardashian left for his children — but not until he turns 35.)

Now, thanks to a new report from The Blast, we have some new insights into the Rob Kardashian child support payments, as well as the complete 180s Rob and Blac’s finances have apparently done in the last year.

According to their report, Rob used to earn approximately $100,000 per month, the bulk of which — over $1 million per year — came from being a member of the Keeping Up With The Kardashians cast. But at some point this year, Rob’s contract was reworked, and he now only gets paid for the episodes in which he actually appears — and only $50,000 per episode at that.

Blac, on the other hand, has seen her net worth skyrocket into the low seven-figures. Rob’s lawyers further allege that between appearance fees and social media and other endorsements, Blac Chyna earns “about $60,000 per month.” That’s $720,000 per year, or exactly six times more than Rob earns. (Which, to be clear, is still $120,000 per year. But being a celebrity ain’t cheap.)

Since Blac’s income is so much higher than Rob’s, and since she and Rob share Dream’s custody equally, Rob Kardashian’s legal team is now arguing that Blac owes Rob exactly $2,864 per month, or $34,368 per year. (It’s not clear how they arrived at that figure, though it seems too specific to be completely arbitrary.) A judge will decide the matter next month.

Between now and then, it looks like we’ll have a fair bit of lawyer-on-lawyer sniping in the celebrity press. Lisa Bloom, who’s representing Blac Chyna in the child support case, told Page Six that Rob Kardashian is a “poor little rich boy” and accused him of “deliberately retreat[ing] from social media to reduce his income so that he can pay less child support.”

Rob has once again deleted his Instagram account. But he remains fairly active on Twitter, where he has a healthy 7.28 million followers. But he has been quiet for the last few months, even by his standards. The only update we’ve noticed was when he teased some news about his weight loss back in May, shortly after which he got rid of his IG account.

But Blac has been a consistent presence on social media — and in tabloids. This past spring, Blac and her crew got into a fight with a group of people at Six Flags, and subsequently lost a stroller company’s endorsement. And this summer, she allegedly got pregnant with her 18-year-old then-boyfriend YBN Almighty Jay’s baby after the two of them had been dating for around eight weeks, but later announced she was “just bloated.”

REPORT Blac Chyna and Rob, haunted by her spousal abuse allegations, stick together despite Kardashian wishes