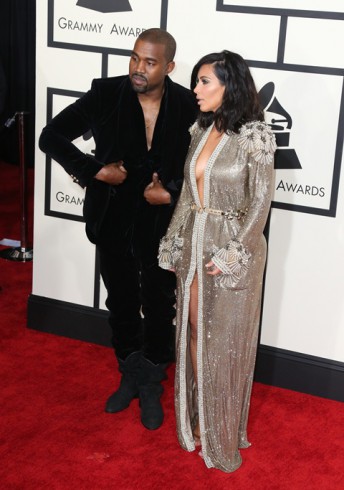 Kanye “K-West” West made something of a triumphant return to the Grammy stage at this year’s awards ceremony. He ended a six-year Grammy boycott in typical K-West fashion: after performing twice–or, once more than anyone else, depending on how you choose to look at it–he jumped onstage during Beck’s Album of the Year acceptance speech, later saying he did it to protest the award not going to Beyonce, and that voices in his head told him to do it.

(So, maybe “visible” is a better word than “triumphant.”)

Now, the K-ster is going a step further with his general criticisms of the way the show is run, saying he’ll return to his boycotting ways starting with the 2016 ceremony unless the voting members start to recognize the artists whose work is the most popular. In an interview with Ryan Seacrest during which he touched on all manner of Grammy controversies, Kanye took issue with some of this year’s upsets, saying he wants to “fix the voting system to be more in accord with the popular votes because popularity is what is needed to sell commercials….A revolution of inspiration can only be had when the older generation combines with the younger generations.”

On the one hand, Kanye sort of has a point. The Grammys have never been a popular awards show, and, at this point, the ceremony really only exists to sell commercials first, albums second. Pandering to the biggest sellers of the past year wouldn’t be a bad thing where self-promotion is concerned. On the other hand, upsets are fun, and unexpected moments during tightly choreographed moments are neat. This year’s Grammy ceremony ran well over three hours, and featured twenty-two performances against only nine awards. So are the awards really the purpose of the show?

What do you, the listeners at home, think? Is Kanye right? Or is he just spoiled / foolish / silly / absurd / some other derogatory adjective? And, more to the point: Did you watch the Grammys? What did you think?