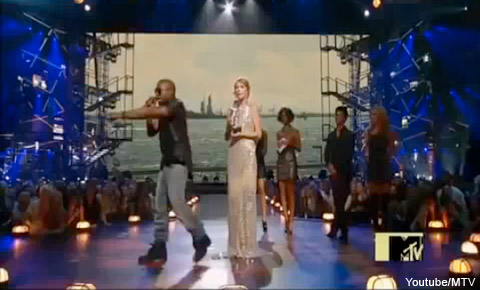 You won’t believe this video from the MTV Video Music Awards show!

WOW! So much for Kanye West’s humbling remarks after he was skewered on an episode of South Park for being an ego-maniac!

Taylor Swift won for Best Female Video and was in the middle of her acceptance speech when Kanye West took the microphone from her and announced:

“Yo Taylor. I’m really happy for you. I’ll let you finish, but Beyonce had one of the best videos of all time!”

The camera’s switched to Beyonce who appeared to say, “Oh my God!” with a look of shock and horror on her face.

Kanye continued, “One of the best videos of all time!” He shrugged and handed the microphone back to a stunned Taylor Swift, who was literally speechless as the crowd began to mysteriously applaud.

WTF?!? Wow! Where was this when Forrest Gump beat out Pulp Fiction and The Shawshank Redemption for best picture? The MTV Video Awards? REALLY? Poor Taylor.

UPDATE!! During Beyonce’s acceptance speech for Video of the Year (See Kanye? You just needed to be patient), she talked about what a great thrill it was for her the first time she was on the VMAs and she invited Taylor back out so she could “have her moment.” See the feel-good video HERE.

UPDATE 2!! Watch Kanye West’s apology on The Jay Leno Show HERE!
Be our BFFs on Twitter and Facebook!