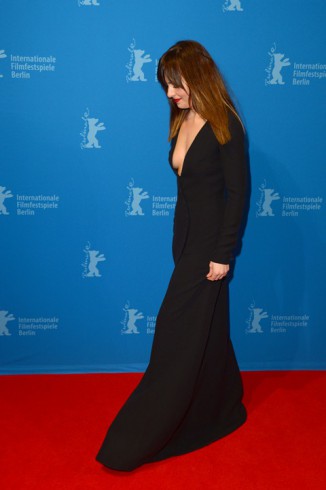 The magical day is almost upon us: tomorrow, Friday, February 13th, in this the year of our Lord 2015, we can all finally go see Fifty Shades of Grey on the silver screen. There’s been so much anticipation and buildup surrounding this movie that you could be forgiven for thinking it was actual first-time sex. Which is also appropriate, because, very much like sex between people who don’t like each other at all and can’t get far enough apart from one another, the movie is apparently fifty-plus shades of awful. Just, awkward, awful, unwatchable nonsense. The film opened with a Rotten Tomatoes rating in the mid-fifties, and that number has only dropped as more and more reviews come in. Currently, it has a 44% rating, which puts it in the same category as the third Night at the Museum installment, forgettable Mark Wahlberg vehicle The Gambler, and straight-to-DVD horror flick Poker Night, about a masked serial killer and a weekly poker game among veteran cops. So, whether you intend to see the movie or not, enjoy a sampling of some of its finer criticisms, provided by some of America’s finest critics:

Gregory Wakeman, of CinemaBlend.com: “Unfortunately, rather than living up to this furor,Fifty Shades Of Grey, the film, is a meandering mess that is shackled by its trashy and corny roots and is an early contender for the worst film of the year….The common consensus–because of the carefully released announcement that Fifty Shades Of Grey possesses 20 minutes worth of sex scenes as well as the countless protests organized by religious organizations to block its release — is that the film is so shocking and controversial it simply needs to be seen to be believed. But instead, it should be avoided. Because as it progresses, it becomes clear that Fifty Shades Of Grey simply wasn’t ripe for adaptation.”

Rodrigo Perez, of IndieWire.com: “Filmed with curiously uninvolving flatness, director Sam Taylor-Johnson(“Nowhere Boy”) has the unenviable task of taking sophomoric, sub-par material — likely studio committee-d to death — and trying to make it sexy and erotic with two perfectly mismatched actors. Their chemistry is nonexistent and we’ve all seen high school science experiments yield more sparks than the pairing of Dornan and Johnson, both of whom appear as if they’d like to be anywhere else. Thus, the movie constantly strains itself to create heat, especially in the bloodless sex scenes, mostly by profusely applying each sequence with would-be seductive contemporary music (Beyonce, Sia, Ellie Goulding, The Weeknd) as a desperate lubricant to produce some kind of eroticism.”

Roger Moore, of the Tribune News Service: “Clinical as a classroom lecture, it’s a limp sadomasochism primer, which explains both the runaway success of the E.L. James novel and the startling pre-opening sales stats from America’s Promise Keepers belt. Industry sources finger Arkansas as the second most popular state for pre-release ticket sales. Dominance and submission, demeaning as both can seem, sells.”

Claudia Puig, of USA Today: “We’re supposed to believe Anastasia might be swayed to share Christian’s predilection for dominance and submission, but Johnson doesn’t convey much enthusiasm with her one-dimensional acting. What could have been provocative instead just feels like retro fantasy. Say what you will about the domineering Christian, but at least he knows himself, which is more than can be said for the suggestible blank slate that is Anastasia in this plodding, inane and wretchedly acted movie.”

In sum, it sounds like Fifty Shades suffers from probably the worst pop culture fate of all. It isn’t a good movie, and it isn’t a so-bad-it’s-good movie. It’s just really, really boring. Which is really, really bad news for anyone who wanted to see it because they enjoyed the books, or wanted to see it because they thought it would be a hilarious Valentine’s Day experience. If you want to make it work for you, then, you might try sneaking a flask (or two [or three]) into the theater and participating in the Official* Fifty Shades of Drunk Drinking Game. The ground rules are these:

-Every time Jamie Dornan’s acting makes you want to chuckle, take a drink.
-Every time Dakota Johnson looks like she would rather be stripping wallpaper from a bedroom closet than acting in this movie, take a drink, and inhale deeply from the flask like it’s a can of paint thinner.
-Every time you wish you were actually inhaling paint thinner instead of watching the painful absence of filmed sex, take two drinks.
-Whenever the elevator doors don’t close on one of the actor’s heads, sigh, take a drink, and then sigh reflectively.
-If you notice Jamie Dornan’s accent coming through his put-on American one, turn to your date or the friend you came with, say “For Ireland” in your best brogue, and have a big ole swill.
-If you find yourself wondering whether the money the people who made this movie got paid to make it was worth what they sacrificed in exchange, pour some out for dead dreams.
-When you realize–for the first time–that you’ve had better, hotter, stranger, or more dangerous sex than whatever is playing out on the screen, take a drink, punch yourself in the genitals, and then have a drink again.
-Whenever either main character uses a bad experience from childhood as the rationale for their adult sexual behavior, finish your drink.
-Finally: If, at any point, you find yourself confronted by an usher because of your drunken ways, just point to the screen, shrug, and offer the poor kid a seat. (Not a drink, though. If you get arrested during Fifty Shades’ opening weekend, you’ll never live it down.)

And remember, folks: Getting up to go to the bathroom in between every sex scene will make the whole experience go by much more quickly. Just try not to giggle so much that you disrupt the good times of everyone else in the theater. Happy Valentine’s Day!

*not actually official in any way