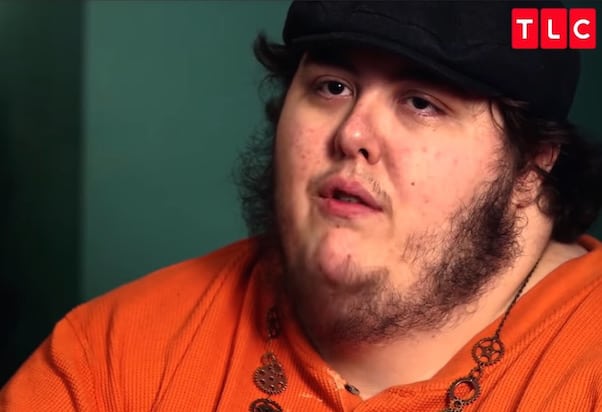 We’re just days away from Steven and Justin Assanti’s fourth My 600 Lb Life episode, and interest in the next official Assanti Brothers update is at an all-time high. Earlier this week, Justin lifted the curtain on how the show gets made, and leveled some pretty serious accusations against Megalomedia, My 600 Lb Life‘s production company. He quickly deleted his original post, but we’ve been able to recover and reproduce it.

Justin shared the post on Reddit, where he’s a regular contributor. Entitled “Breaking my Silence about the Show,” the post was only active for a few hours, but it’s still accessible via archived versions of the page. In his post, Justin explains the method behind he and Steven’s upcoming Assanti Brothers update, which will be the fourth chapter of their My 600 Lb Life story. (Technically, their 2017 debut counts as two installments, as the show considers the double episode “Part 1” and “Part 2.” Their first Where Are They Now? episode aired in January of 2018.)

Justin’s tea spillage mirrors a similar behind-the-scenes look that Steven gave a year-and-a-half ago. In Steven’s Assanti Brothers update, though, he joked about not being able to describe “the process” behind filming, “because I could get sued.”

Justin, by contrast, had no such compunction (until he deleted the post). He claimed that “a very good person and producer” for Megalomedia was fired after she wouldn’t “trigger [Justin’s] PSTD during a sit in with Dr. Paradise.” Justin also accused Megalomedia of “blackmail[ing] him into filming new scenes” last year by telling him they would withhold his $1,500 fee for participating in the show unless he agreed. (My 600 Lb Life cast members receive a $1,500 “talent fee” for filming, along with a moving stipend, should they relocate to Houston — click here for our explainer on what and how much the production company pays for.)

“What you see on TV isn’t real,” Justin adds, “so get your heads out of the sand.”

Here’s a screengrab of Justin Assanti’s original post, followed by a transcript of his claims: 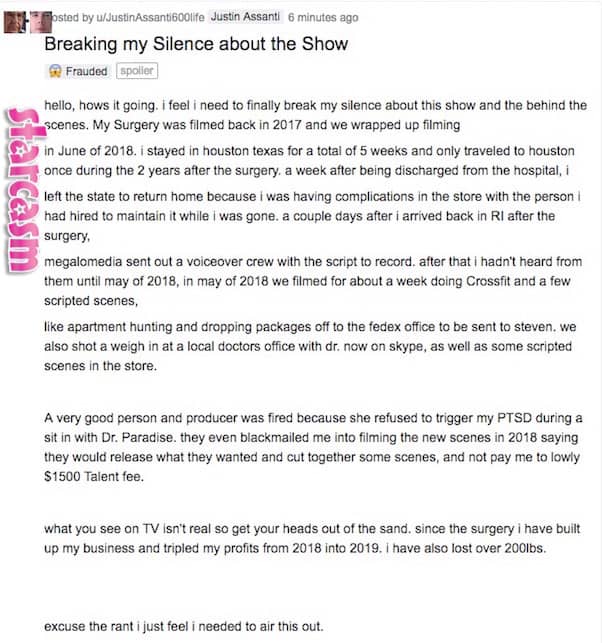 hello, hows it going. i feel i need to finally break my silence about this show and the behind the scenes. My Surgery was filmed back in 2017 and we wrapped up filming
in June of 2018. i stayed in houston texas for a total of 5 weeks and only traveled to houston once during the 2 years after the surgery. a week after being discharged from the hospital, i
left the state to return home because i was having complications in the store with the person i had hired to maintain it while i was gone. a couple days after i arrived back in RI after the surgery,
megalomedia sent out a voiceover crew with the script to record. after that i hadn’t heard from them until may of 2018, in may of 2018 we filmed for about a week doing Crossfit and a few scripted scenes,
like apartment hunting and dropping packages off to the fedex office to be sent to steven. we also shot a weigh in at a local doctors office with dr. now on skype, as well as some scripted scenes in the store.

A very good person and producer was fired because she refused to trigger my PTSD during a sit in with Dr. Paradise. they even blackmailed me into filming the new scenes in 2018 saying they would release what they wanted and cut together some scenes, and not pay me to lowly $1500 Talent fee.

what you see on TV isn’t real so get your heads out of the sand. since the surgery i have built up my business and tripled my profits from 2018 into 2019. i have also lost over 200lbs.

excuse the rant i just feel i needed to air this out.

Justin’s post also recalls our 2018 interview with My 600 Lb Life Season 3 star Amber Rachdi, who called some of Megalomedia’s producers “next level unethical” and accused them of bullying and unprofessional tactics during filming.

In the comments on his original post — which comments haven’t been deleted — Justin explained a few of his remarks. For the upcoming scene with Dr. Paradise, “the head producers back in the main office” were telling “the field producer” — the woman who Justin says lost her job for refusing to trigger him — what to do. As for Dr. Paradise’s response? “It’s all business,” Justin explained. “He just followed the direction of the producer.”

Finally, it doesn’t sound like Justin filmed any scenes together with Steven. As we revealed a few months back, Steven, who’s living with his wife Stephanie and their daughter in Iowa, has little to no contact with Justin or the rest of his family in Rhode Island. “He doesn’t bother us since he got married,” Justin said.

The next Assanti Brothers update will air as part of the current season of My 600 Lb Life‘s Where Are They Now? spinoff on Wednesday, May 22, at 9 PM on TLC.