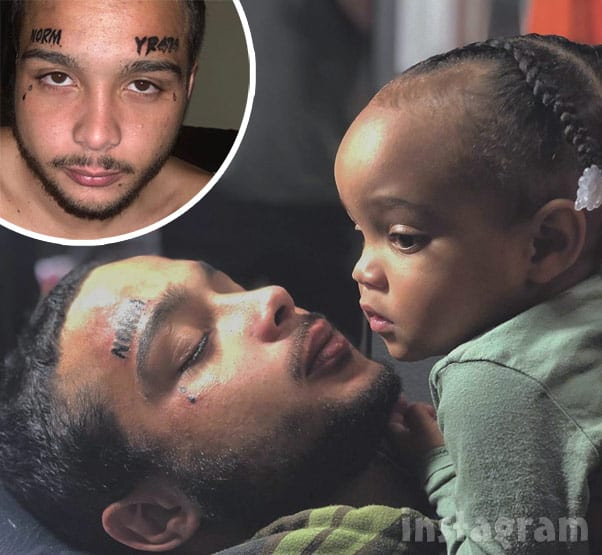 Teen Mom: Young and Pregnant stars Ashley Jones and Bariki “Bar” Smith are currently broken up, and part of their recent angry back-and-forth on Twitter included Ashley expressing frustration over Bar wanting to go and get a tattoo instead of helping her watch their daughter Holly. As it turns out, it was more than one tattoo — on his face!

Bar unveiled his latest tattoos on social media over the weekend, which include “NORM” and “YR474” written in all caps above both of his eyebrows. 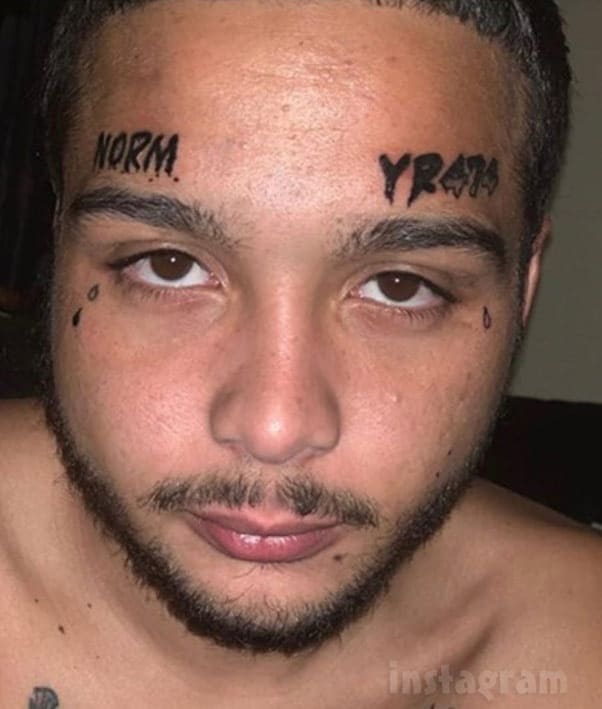 The tattoos are tributes to friends of Bar’s who passed away. I am unsure who “Norm” is, but “YR” is a rapper who performed under the name Young Rell.

Young Rell’s real name was Terrell Blay. Terrell was shot and killed in San Francisco on the night of March 30. According to police, they had no leads in the shooting other than witnesses claiming to have seen the shooter drive off in a sedan. Terrell was just 26 years old.

Bar has been very open about the fact that he was raised in an environment where shootings, violence, and gang activities are a common occurrence. Bar’s older brother Troy Seales was convicted of shooting and killing a man last year, although Troy and his legal team continue to insist he is innocent and wrongfully convicted as they fight to have the sentence overturned. Bar himself shared graphic photos of his own gunshot wound from when he was 18 on Instagram last year.

Terrell was also no stranger to guns and violence. He pleaded guilty to unlawful possession of a firearm in 2011 after he was arrested in the wake of a gang shooting that injured five people on San Francisco’s Market Street in June of 2011.

“When they took my brothers that sh*t was hard for me ??,” Bar captioned a video clip of himself getting the tattoos. “I wish I could’ve been there it would’ve went different and both y’all know that ? I’ll carry this pain forever, and forever promise it’s up with me ??? #YR474 #NORM”

In addition to Holly, MTV cameras were also present and rolling for Teen Mom: Young and Pregnant. I am guessing we will get to hear more from Bar about the tattoos and the friends they are a tribute to during the new season.

So what do you think about Bar’s new tats?

PHOTOS Kailyn and Javi get new tattoos including Isaac, Lincoln and a hummingbird