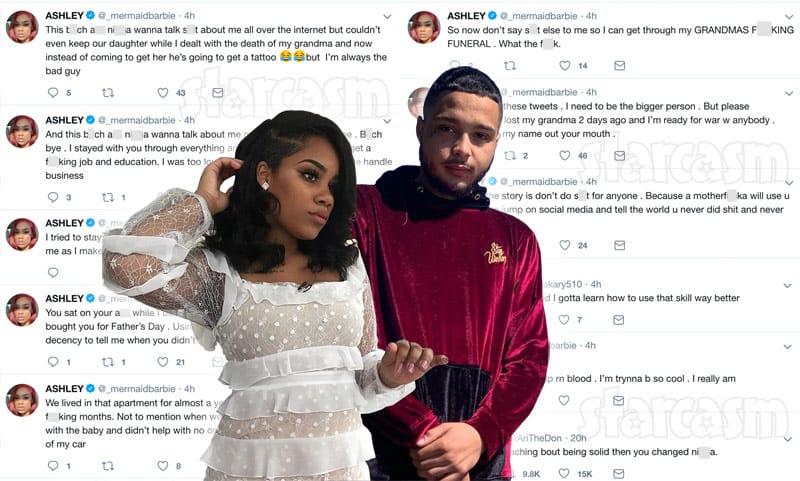 As we reported yesterday, Teen Mom: Young and Pregnant couple Ashley Jones and Bariki “Bar” Smith have split up. Both reality stars confirmed the break up on social media, and Bar even went on a bit of a Twitter tirade expressing his relationship frustrations in a series of since deleted tweets. Soon after we posted about the break up, including Bar’s tweets, Ashley returned the favor with her own series of tweet ‘n’ deletes in which she pulls absolutely no punches while expressing her feelings about Bar.

“I hate for a ni**a to fake on socials like he doing sumn. I know you in real life sir,” Ashley tweeted on Thursday. After that, she didn’t seem to reference Bar at all for close to 24 hours. But, earlier today, she came back — with a vengeance!

At one point, Ashley calls out Bar for not paying rent and not getting a job, and she says he sat around playing Fortnite “on the game system I bought you for Father’s Day.” She also claims that Bar busted out the window of her car — I assume during one of their heated altercations.

I should preface Ashley’s tweets by pointing out that her grandmother recently passed away, as she mentions several times. Clearly, she was in a difficult emotional place while dealing with her grief, which apparently lowered her tolerance level for Bar’s actions and words.

OK, here is what Ashley tweeted (and retweeted) in order:

This b*tch a** ni**a wanna talk sh*t about me all over the internet but couldn’t even keep our daughter while I dealt with the death of my grandma and now instead of coming to get her he’s going to get a tattoo ?? but I’m always the bad guy

And this b*tch a** ni**a wanna talk about me not being loyal and a hoe. B*tch bye. I stayed with you through everything and all I asked was that you get a f**king job and education. I was too loyal cause you been not helping me handle business

I tried to stay quiet. I tried to save face but now you wanna publicly disrespect me as I make preparations to bury my grandmother ? so then let’s tell it all.

You sat on your a** while I busted mine. Playing fortnite on the game system I bought you for Father’s Day. Using the WiFi I paid for. You never even had the decency to tell me when you didn’t have your half of the rent

We lived in that apartment for almost a year and you paid rent 4-12 of those f**king months. Not to mention when we broke up you moved out didn’t help with the baby and didn’t help with no one bill after you busted the windows out of my car

Not to mention the fact that I’m still loaning you money to this day. Still helping you figure sh*t out to this day. I never left you in the f**king dust. I have you my f**king SOUL b*tch for the last 4 f**king year. I had our f**king child.

And then you tell me you regret having a kid by me. I give my life to our child. I give my heart to our child. I spend all the time I can when I’m not working or at school. All you do is keep her for me ? no work, no school. So I buy diapers and put gas in your car.

So how much more sh*t you wanna talk on social media pimp ?? I would have never disprespected you like this ? but you not gone play me out. Period.

So now don’t say sh*t else to me so I can get through my GRANDMAS F**KING FUNERAL. What the f**k.

Imma delete these tweets. I need to be the bigger person. But please understand I lost my grandma 2 days ago and I’m ready for war w anybody. Please keep my name out your mouth.

[OTHER TWITTER USER] Sis say less you don’t do the twitter thing so don’t let him get you started you know wassup your a bomb a** mom by the way ?

But he got me f**ked up rn blood. I’m trynna b so cool. I really am

Moral of the story is don’t do sh*t for anyone. Because a motherf**ka will use u up and then jump on social media and tell the world u never did sh*t and never was sh*t ?

[ASHLEY RETWEETING SOMEONE ELSE] Did all that preaching bout being solid then you changed ni**a.

[ASHLEY RETWEETING SOMEONE ELSE] Niggas CAN NOT take what they put females through and I’ll argue with any nigga ?

I hope she finds peace in her mind after this twitter rant ?? you gotta let people get it off their chest sometimes ❤️ tell yo truth baby girl go ahead ????

As mentioned in our previous post, Bar says he has a job and a place to live all lined up. It’s unclear who got custody of the gaming system.

Paul Nassif to file for separation from Adrienne Maloof this week

Why are so many celebrities announcing divorces lately? Here’s a good explanation…