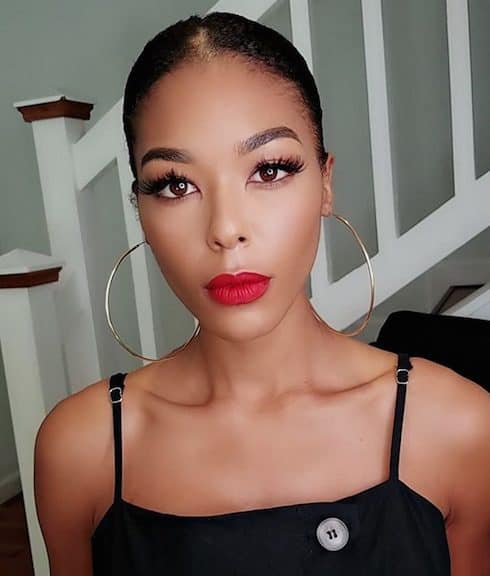 It’s been a pretty rough week for Moniece Slaughter. She’s currently in the middle of what’s becoming a legal battle with her longtime nemesis Princess Love, after an on-set assault from Princess left Moniece with an injured hand and a lot of questions.

Now, Moniece’s struggles with mental health appear to have resurfaced in an alarming fashion. The Love & Hip Hop Hollywood OG has taken to Instagram to announce that the show is doing her more harm than good — is “sucking the life out of [her],” in fact — and that she needs to get out. But is Moniece Slaughter quitting LHHH? Unfortunately, taking the Masika Kalysha route off the show may not be an option.

Here’s the image Moniece shared on Instagram: the simple pair of hashtags reads #ReleaseMoniece and #PassItOn. We’ve screengrabbed the entire post in case it gets deleted in the coming weeks: 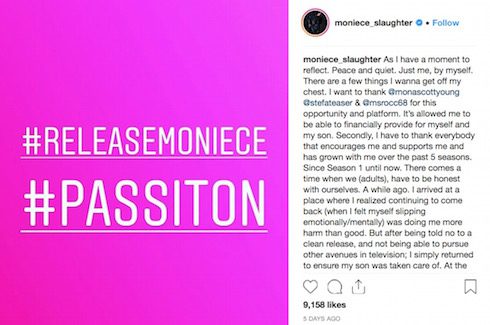 And here’s the entire caption to the photo, in which a clearly distressed Moniece says that “continuing to come back” to Love & Hip Hop Hollywood” has been “doing [her] more harm than good” for some time. She also describes her negotiations with producers to some extent, saying that she was “told no to a release” from her contract before Season 5 and “had a complete mental breakdown” as a result.

As I have a moment to reflect. Peace and quiet. Just me, by myself. There are a few things I wanna get off my chest. I want to thank @monascottyoung @stefateaser & @msrocc68 for this opportunity and platform. It’s allowed me to be able to financially provide for myself and my son. Secondly, I have to thank everybody that encourages me and supports me and has grown with me over the past 5 seasons. Since Season 1 until now. There comes a time when we (adults), have to be honest with ourselves. A while ago. I arrived at a place where I realized continuing to come back (when I felt myself slipping emotionally/mentally) was doing me more harm than good. But after being told no to a clean release, and not being able to pursue other avenues in television; I simply returned to ensure my son was taken care of. At the top of this season, when I was told no to a release, I had a complete mental breakdown. I chose to intensive outpatient therapy and medication. But today, I’m in a place where I absolutely can not take any more. For any reason. I’m miserable. I have completely run out of steam. I have no more to give to this franchise. It’s sucked the life out of me. My depression. My anxiety. My sleep deprivation. My weight loss. Are at an all time high. And with a slightly teary stare, I am begging you. Humbly. Desperately. Please. Release me. I don’t know how else to drive it home. But I feel like I’ve run out of options. Just release me. Let me go. And let’s be thankful for 5 amazing seasons. But I need off this ride. For my sanity. For my son. For myself. I neeeeeeeeddddd to be released. #withlove❤️

Moniece has been open and honest about her mental health struggles since her Love & Hip Hop debut. She often reminds her fans that they shouldn’t be afraid to reach out for health — and that mental health problems, still largely stigmatized in this country, are very much a real problem:

Do not be afraid to take care of yourself. Do not be afraid to reach out for help. Do not be ashamed of yourself after a diagnosis. Find the right doctor. Find the right medication. It's important that you not only follo w your doctor's advice and instructions. But to also follow your first mind. Brain differences don't mean that you're dumb. Simply means you're different. But the best part, is that you feel at higher and deeper levels than your avg bear. You're unstoppable if you stay on a healthy path, you'll be able to do and accomplish damn near anything, you become fearless.

Moniece is just as open about mental health in her public appearances, often bringing up the topic in interviews. One notable occurrence came during LHHH Season 3, when she acknowledged she’s “constantly” in therapy in the middle of a long talk on Los Angeles’ Power 106.1.

“Recently, it’s only been [about] every other week,” Moniece said at the time. “Normally, I’m [in therapy] two days a week, though. Even if I have to Skype…It’s definitely [medicine]. And nothing is worth my sanity — I’ve just been through way too much.”

Back then, Moniece said that things started getting better for her, albeit slowly, once she learned how to act like herself. “What’s helping me [get better] is understanding that I am who I am,” Moniece said. “And I’ve learned to live my life unapologetically.”

If things are truly as bad for Moniece as they seem to be in her Instagram post above, we hope she gets help immediately. As far as her participation on Love & Hip Hop Hollywood, no show is worth the stress, anxiety, and anguish it sounds like Moniece has been subjected to over the last few years. With luck, she’ll be able to reach an agreement with the show’s producers and start to heal — presumably with no cameras around.