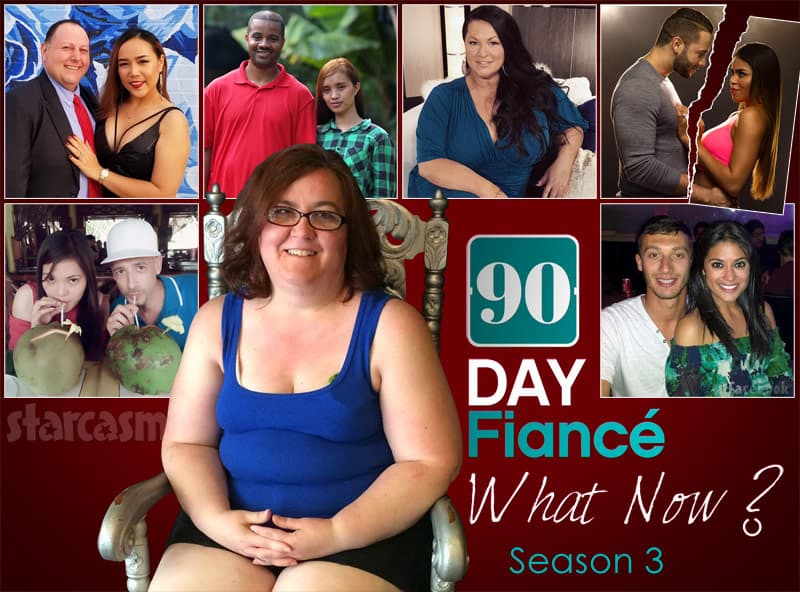 It’s been an exciting couple of weeks for 90 Day Fiance news! TLC has officially announced the Happily Ever After Season 4 cast and premiere date, a brand new spin-off titled The Family Chantel is coming in July, and a the new series concept 90 Day Fiance: The Other Way is set to debut in June. This weekend fans got even more great news as the cast of the network’s What Now? series has been revealed, and it includes some of the franchise’s most memorable stars!

The 90 Day Fiance: What Now? cast wasn’t actually officially announced by TLC — at least not on purpose. The @talkerof?s Instagram account found synopses for the first two episodes of the series, and that’s what gave it away. Here are the synopses with episode titles:

First Look – David has a new job but Annie remains frustrated with their living situation. Fernanda expresses her issues about life in Lumberton. Molly finally lets go of her life with Luis. Tarik pursues a pre-nuptial agreement.

Loren and Alexei butt heads over their priorities; Tarik approaches Hazel about signing a pre-nup; Danielle gets a makeover to get back onto the dating scene; Larry anxiously awaits for Jenny to arrive in the States; Jon tries to make Fernanda happy.

90 Day Fiance: What Now? Season 3 will premiere on the TLC Go app on Monday, April 15. The first episode will air on TLC on Sunday April 21.

From the episodic summaries we can piece together who all will be featured. Here’s a list of the cast with the previous 90 Day Fiance shows they have been on as well as a very brief catch up:

#90DayFiance #HappilyEverAfter SPOILER! David and Annie have reportedly moved out of the firehouse and are hoping to eventually return to China and/or Thailand: https://t.co/ANVswptvZS

David and Annie are still together and still very involved with the other cast members and fans on social media. The synopsis above mentions him having a job, which will more than likely be the college teaching gig we reported on back in November.

David and Annie seem to be doing quite well offering personalized messages through Cameo — due in large part to their great sense of humor. Both Annie and David have talked a lot about wanting to return to Thailand, or even China, but it’s unclear if that will be part of their story line. 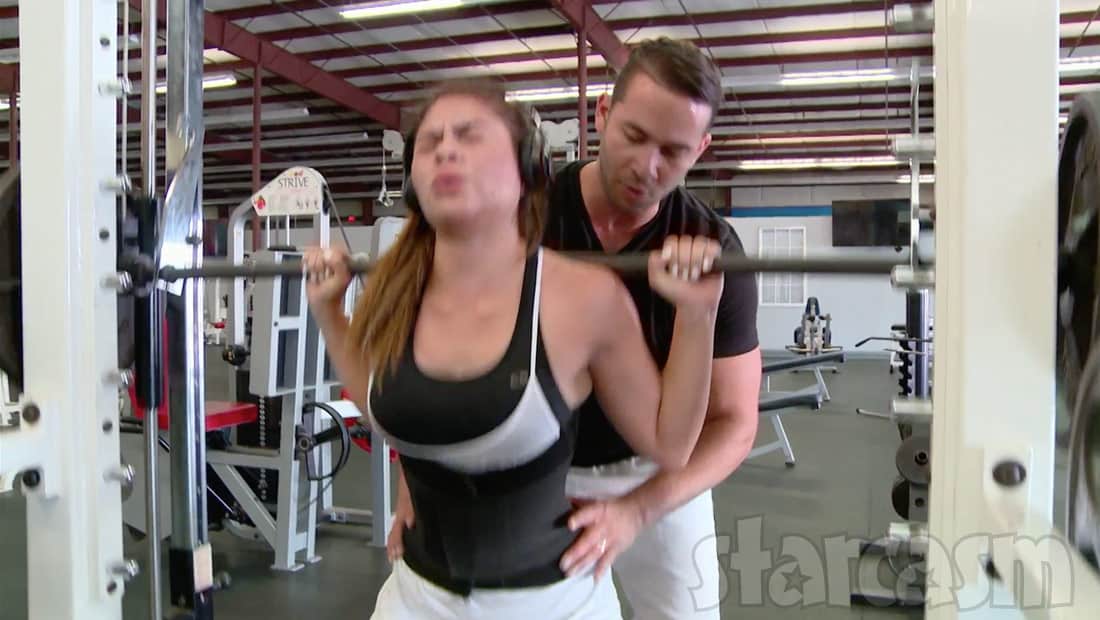 If you have not been keeping up with all the 90 Day Fiance Season 6 drama, first let me say congratulations! Secondly, I hate to be the one to break it to you but the fairy tale romance between Jonathan and his teen bride has crashed and burned. As it mentions in the episode description above, Fernanda was apparently not too thrilled about remaining in Lumberton, and she has since relocated to Chicago to pursue her modeling “cuhreer.”

That doesn’t sound all that terrible, right? Well, I didn’t mention the brief sex tape “accidentally” posted by Fernanda featuring Jonathan’s junk — which was only a little more x-rated than the couple’s gym scene on the show (screen cap above).

#90DayFiance Molly Hopkins is writing and recording a batch of songs with her brother Jess: https://t.co/1HYn29HJFf #MollyCyrus #MoveOverEvelyn

It sounds like the “debil lubbin” Molly will finally be moving on from Luis. I’m guessing that will mean a new focus on her dating life, lingerie business, relationship with her daughters, and her budding music career. I’m also guessing that we will not be seeing Luis, who didn’t have quite as hard of a time moving as Molly did. If you are COMPLETELY out of the loop, Luis has since remarried and is currently living in New Jersey.

Hazel and Tarik Myers
Before the 90 Days Season 2

I believe Tarik (aka Dirt DayOH and Dirt Bourdain) and Hazel are pretty much exactly where they left off at the end of Before the 90 Days Season 2. The mention of a pre-nup suggests the two are seriously looking to get married, but I haven’t heard anything about an actual wedding date or a visa approval for Hazel (yet).

Loren and Alexei are still Loren and Alexei — and that’s a refreshingly great thing for 90 Day Fiance fans. No ? storm drama here! I’m guessing we will see a lot of Alexei without his shirt as Loren continues her work promoting Tourette’s syndrome awareness. I completely support both of those things.

#90DayFiance @DanielleJbali shares a lengthy post answering her most frequently asked questions like: Why did she keep Mohamed's last name? What happened with Nelson? And what's up with that "feminine hygiene problem" Mohamed talked about?! https://t.co/WUqzOhxpD9

It sounds like TLC is going to give Danielle the “From Not To Hot” treatment that she was rumored to be getting on a separate show two years ago! Oh man, I am SO here for a Danielle makeover! I just hope they have higher caliber beauticians and stylists in Sandusky, Ohio than they do immigration attorneys.

#BeforeThe90Days Larry quits his job at @McDonalds to return to the Philippines, buy an RV, and film his own web series on Youtube: https://t.co/q6fBuj5lPt#WhatCouldGoWrong #TheLarryLife
* Not Larry's actual camper or show title pic.twitter.com/a9uIYzlpbQ

Jenny and Larry Passariello
Before the 90 Days Season 1

Fans will finally get to see where the rest of Larry’s 401k went! The last time we checked in with Larry he had purchased a camper and was going to attempt to launch a YouTube channel documenting his and Jenny’s misadventures driving around the country. “It wasn’t clear which country.) Larry has hinted that we would be seeing them again, and we had sources confirm that he was filming — now we know why! I love me some Larry, and I cannot wait o have him back on my screen again! Of course, I will need to adjust the brightness on that screen because his huge shiny white hat damaged it last time. ??

UPDATE – Once the What Now? episodes were made available via the TLC GO app, it was revealed that there were four additional couples! Here is a revised photo that now also includes What Now? Season 3 co-stars Noon and Huck, Alan and Kirlyam, Rachel and Jon, and Kalani and Asuelu! 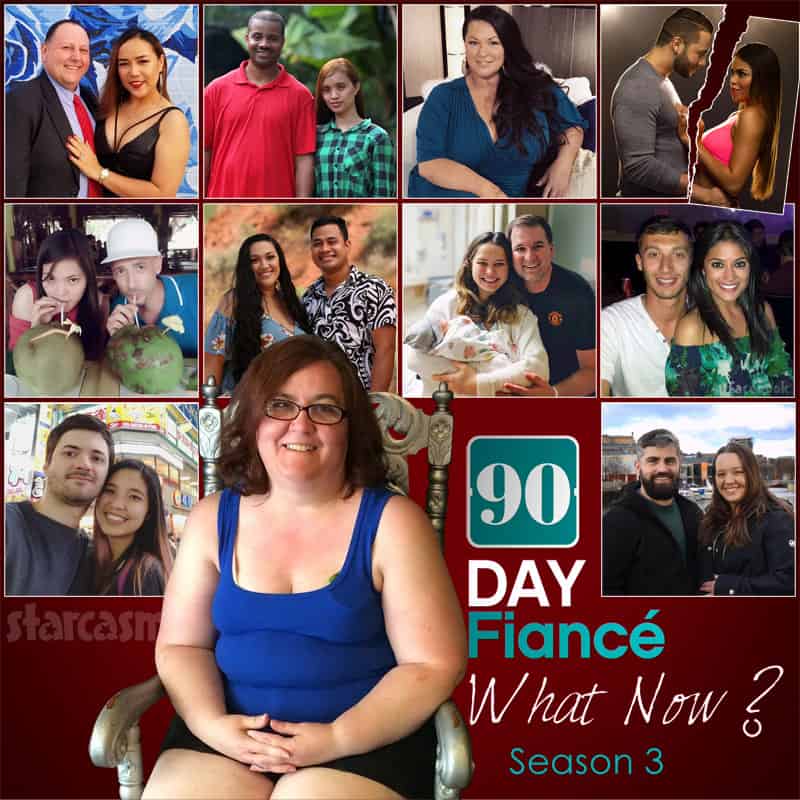